In this guide, we’ll explain why you should upgrade your four-line phone system to a VoIP provider like RingCentral. RingCentral offers unlimited calls to anywhere in the U.S. and Canada, can be up to 70% cheaper than traditional phone services — you can even keep your existing phone numbers.

What Type of Business Phone Service is Best for You?

VoIP is typically more affordable than landlines, with flexible plans generally starting around $25 per user per month. This includes setup costs, hardware costs, ongoing service costs, and maintenance costs. The only additional cost outside of the phone service itself is your internet connection, which your business would have anyway. A landline system, on the other hand, can cost more than $100 for a base unit plus rigid monthly service charges and accessory costs.

RingCentral and Verizon are two of the most popular offerings in the VoIP and landline space, respectively. For that reason, we used them as examples for the sort of pricing and features you can expect from each type of system.

4-Line Phone Systems vs VoIP Affordability at a Glance


Note: Verizon information quoted from an online chat with a Verizon representative on December 12th, 2018 for a New York, NY, office.

What Is a 4-Line Phone System?

Four-line phone systems run four analog (landline) phone lines into your office, and most four-line phone systems include hardware that can connect additional phones in multiples of four. This gives each employee in a small office their own phone and extension, making it a more economical solution than giving each employee their own unique phone line. However, you can only make or receive up to four phone calls at the same time.

How Much Does a 4-Line System Cost?

What Is a PBX Multi-Line Phone System?

A Private Branch Exchange (PBX) is a type of landline phone system that can support a large number of phone lines—typically eight to 32 lines or higher—removing one of the major limitations of the four-line phone system for expanding businesses. As a result, this has traditionally been the choice for larger companies that need a professional phone system, with a cost between $300 and several thousand dollars, depending on the number of lines it supports.

Like a four-line phone system, each employee gets a unique extension and shares the available phone lines. If you reach your capacity, no additional calls can be made or received.

What Is a VoIP System?

VoIP, which stands for Voice over Internet Protocol, is an internet-based phone system. Like a landline system, each employee receives their own handset and a unique phone number or extension. However, rather than operating across older landlines, calls are routed over your business’ internet connection.

A major advantage to VoIP compared to landline technology is that it can support an unlimited number of phone lines. A landline system is physically limited to the number of phone lines you have connected and to add more, you need to install more phone lines as well as upgrade your hardware. With VoIP, you use one internet connection for everything, significantly reducing the initial setup and ongoing maintenance costs and making it easier to scale your system.

When to Use a 4-Line Phone System

While VoIP systems are quickly becoming the norm, it should be noted that VoIP call quality and reliability are directly tied to the quality of your internet connection. Therefore, if you live in a remote area or otherwise do not have reliable internet service where you are, sticking with a traditional four-line system may be your best bet.

When to Use a VoIP Service

For the majority of small business users in more populated areas, VoIP will be a better choice than a four-line phone system. It offers more features like mobile app use at a lower cost, and reliability problems aren’t likely to be an issue for most organizations in cities and suburbs. You can also check out our VoIP versus landline comparison to find out which is right for your business. 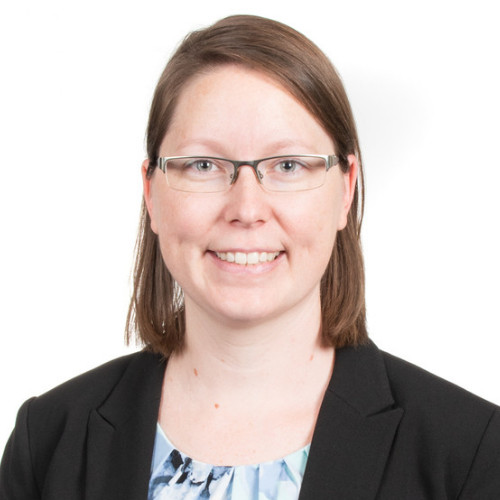 “I’m a big fan of VoIP systems since they’re more like a unified communication system,” said Jacy Smith of ReFresh IT. “It makes communication within a small business seamless and gives employees an advantage to get their work done.”


With traditional landline phone service, call features can vary depending on whether or not you bought a PBX system. With VoIP phone services, however, you often get access to the same features regardless of the type of handset that you use. You can also make outbound calls using your business number from your cell phone by using a VoIP mobile app.

In addition, VoIP systems offer features like advanced call routing. This gives you, for example, the ability to set a recurring schedule in which calls are routed to your cell phone on evenings and weekends. Voicemail is also much more sophisticated with VoIP. You can set up voicemail messages to be delivered to your email inbox in audio form or, depending on the provider, transcribed to text.

Finally, VoIP phone service can typically be integrated with CRM and other third-party business apps like Salesforce and Zoho. Doing so allows you to make calls directly from your CRM using a softphone tool on your computer, and when you receive a call, your CRM can automatically scan for the number in your system and show you any relevant data you have associated with it.

While VoIP systems include many benefits for businesses not offered by traditional phone services, advanced features will depend on the provider selected. RingCentral is a great option for growing businesses with affordable pricing plans and features like customized voicemail as well as access to its mobile app at all plan levels. Visit RingCentral today to see what plan is best for your business today.

Traditional landline phone systems used to have a significant advantage over VoIP phone systems for call quality and reliability because VoIP calls are dependent upon the speed and stability of your internet connection. However, because of improvements in internet speeds and technology innovation among VoIP service providers, this gap has closed.

One factor to consider is the amount of data you regularly use for other purposes, such as file transfers, audio or video streaming, etc. Most small businesses with a modern broadband internet connection will have ample bandwidth for multiple uses, but businesses in more remote areas or without a high-speed connection may still be better served by a landline phone system.

While it’s common for both landlines and VoIP to include unlimited domestic calling in their plans, international call rates are significantly cheaper with VoIP. This is because your voice is transmitted as data over the internet, rather than over the copper lines. In our comparison of RingCentral and Verizon, for example, international calls on Verizon’s landlines were often almost 30% higher per minute for comparable destinations.

Another advantage of VoIP technology is that you can often get cheaper international rates by purchasing an international phone number. RingCentral, for example, offers international numbers for over 70 countries.

4-Line Phone System vs VoIP: Ease of Use

With most four-line phone systems, setup entails connecting a main PBX console with up to four analog phone lines. All of your administration takes place on the console’s screen, but you will have to use the phone’s keypads to manage calls and scroll through options. All told, the minimal feature set of a landline system makes it very easy to use.

Leading VoIP platforms like RingCentral are managed with web-based interfaces that are also incredibly intuitive and user-friendly. Most of these services offer an online portal to help you get through the setup process. If you are not a tech-savvy person, then accessing all the features of a VoIP service and setting up things like international numbers may be confusing.

How We Evaluated 4-Line Phone Systems vs VoIP

A small business phone system should allow companies to send and receive calls effortlessly. It should also offer employees the ability to route their calls and handle call traffic with a virtual receptionist. Other bonuses, like mobile use and software integrations, can be extraordinarily helpful in making your company’s telephony operations as efficient as they can be.

Therefore, when comparing four-line and VoIP technology, we evaluated:

Based on these criteria, VoIP systems are going to be the best choice for most small businesses. They offer more functionality at a more affordable price, and they offer just as much call quality as their landline counterparts if you have a stable connection. With that in mind, rural companies or businesses in places with frequent power outages will want to consider four-line systems, because they can run independently of the internet and electrical connections.

VoIP phone service providers like RingCentral have dramatically improved in quality and are comparable to landlines at a fraction of the cost. You can easily add as many lines as you need, and setup is easy. Click here to try RingCentral free for 15 days. 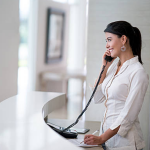 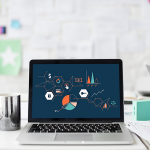 ×
Free Ebook: How To Choose Your Business Phone System
Our comprehensive Ebook will give you everything you need in order to choose and set up your business phone system. From the basics to the advanced.
This email address is invalid.