Dock is a former registered investment advisor and previously served on FINRA’s Small Firm Advisory Board. His expertise is highlighted throughout Fit Small Business’s insurance, retirement, investing, and other personal finance content.

The actual deferral percentage (ADP) test and actual contribution percentage (ACP) test are both required to be administered every year to ensure traditional 401(k) plans are in compliance. While ADP considers only employee deferrals, ACP also includes employer contributions. However, plan sponsors must conduct both tests regardless of whether or not they match.

If you’re interested in setting up a 401(k) or changing 401(k) companies, Human Interest offers low-cost plans that are very competitive in the small business market. They can also help structure a Safe Harbor 401(k) that’s exempt from ADP and ACP testing or streamline compliance testing to let you know before your plan becomes noncompliant.

Each year, 401(k) plans must undergo 401(k) nondiscrimination tests including the ADP and ACP tests. These tests are typically conducted by plan administrators and compare contributions or deferrals of highly compensated employees (HCEs) with those of other plan-eligible employees. To learn about retirement plans exempt from ADP and ACP testing, check out the “Retirement Plans Exempt from ADP & ACP Testing” section below for details.

In any 401(k) plan, there are two types of employees: HCEs and nonhighly compensated employees (NHCEs). HCEs are any plan-eligible employees who earn $125,000 or more in total cash or stock compensation or who own 5 percent or more of the business during the past year. NHCEs are any employees who are eligible for the 401(k) plan but don’t qualify as HCEs.

The biggest difference is that the ADP test compares relative deferrals among HCEs and NHCEs whereas the ACP test compares the contributions of both groups that include employer matching.

Here’s how the ADP test and ACP test work.

The ADP test requires employers to compare the average annual deferral rates of HCEs and NHCEs. However, ADP testing specifically excludes any employer matching — it only measures employee deferrals. The ADP test is also based only on employee cash- and stock-based compensation. Health insurance and other perks are excluded.

Imagine you have a business with 10 employees, all of whom are eligible for a 401(k) and participate in the plan. Let’s say that you own 100 percent of the business, but you have two all-star employees who make more than $125,000 per year. You and your high earners always maximize contributions but contributions are lower or nonexistent for some other employees.

Continuing with the above example of a 10-person company with three HCEs, let’s say that in your 401(k) plan you match all employee contributions up to 3 percent. Using this example, each year you would need to find each employee’s annual contribution rate.

To do this you would add the total contributions to each employee’s account (salary deferrals plus employer matching contributions) and divide by their total cash and stock compensation. As with the ADP test, you then find the average contribution rate for you and your HCEs and the average rate for everyone else.

Both the ADP test and ACP tests must be conducted each year for 401(k) plan sponsors. Each test has ranges that employee deferrals or contributions must fall in for a plan to be compliant. If employee contributions fall outside these ranges, a plan sponsor must take corrective action to bring the plan back in compliance. These corrective actions are discussed further in the “ADP Test and ACP Test Rules” section below. 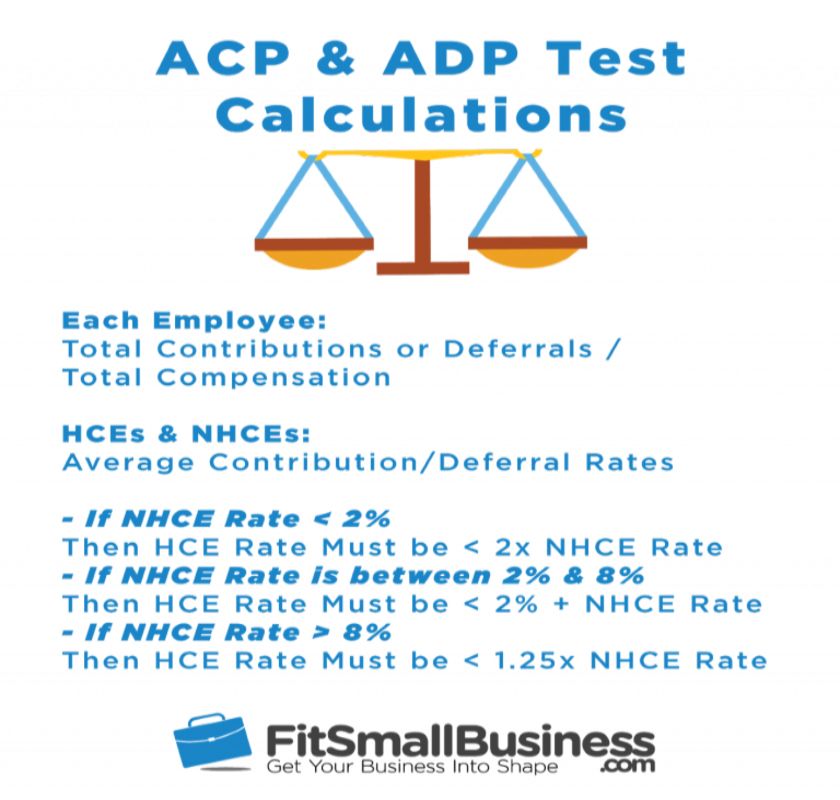 ADP and ACP testing is typically conducted by plan administrators but can still cause headaches for plan sponsors. If you have a small business with just a few high-earning employees or struggle with participation among NHCEs, ACP and ADP testing can restrict HCE contributions or increase expenses to make contributions for NHCEs.

To alleviate yourself of this testing, one thing that you can do is to utilize a safe harbor 401(k) plan. Qualifying a 401(k) for safe harbor requires that you match employee contributions up to 4 percent using one of two different matching schemes. You are also required to vest all employer contributions immediately with employees, rather than using a 401(k) vesting schedule.

The ADP test is typically conducted by a plan administrator and requires that the average deferral rate for HCEs stay within certain limits relative to the average deferral rate of NHCEs. When conducting the ADP test, administrators are required to include all company employees who are eligible for 401(k) benefits. While the tests include all compensation in the form of cash or stock, other benefits like health insurance are not included.

Like the ADP test, ACP tests are typically conducted by 401(k) provider and requires that the average annual contribution rate, which includes pre- and post-tax employer contributions plus employer matching for HCEs not to exceed limits outlined in the “401(k) Nondiscrimination Testing: ADP & ACP Limits” section above.

As with the ADP test, ACP testing includes all cash- and stock-based employee compensation throughout the year. However, unlike the ADP test, the ACP test measures not only employee salary deferrals but also matching employer contributions. This means that, if you fail the ADP test, you are almost guaranteed to fail ACP testing as well.

What Happens When You Fail the ADP Test or ACP Test

When a 401(k) plan fails the ACP test or ADP test, plan sponsors must choose one of two ways to bring the plan back into compliance. Plan sponsors can either make tax-deductible corrective contributions on behalf of NHCEs to make up the difference or make corrective distributions to HCEs that are taxable as income.

When you fail ACP testing or ADP testing, you can either: 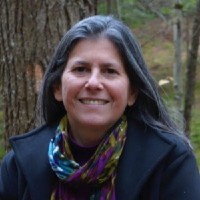 If you want to avoid 401(k) nondiscrimination testing entirely, including the ADP test and ACP test, you may want to consider setting up a safe harbor 401(k) with a firm like Human Interest. For more information on this these types of plans and how they can exempt you from 401(k) nondiscrimination testing, be sure to visit the Human Interest website.

For traditional 401(k) plans, both the ACP and ADP tests need to be conducted annually. Both tests are usually conducted by 401(k) providers — typically administrators. Some firms even advise plan sponsors when their plans are headed toward noncompliance so that contribution levels can be adjusted as necessary.

There are some types of retirement plans that are not required to conduct ACP testing or ADP testing each year, including:

These retirement plans exempt sponsors from requirements to conduct ADP and ACP testing for employee deferrals and employer matching. However, nondiscrimination testing is still required for profit-sharing contributions for plans including safe harbor 401(k) plans.

Human Interest is a relatively new provider of plans, including safe harbor 401(k)s, which mostly exempt employers from 401(k) nondiscrimination testing. If you decide not to institute a safe harbor plan, Human Interest is also one of the few administrators that will alert 401(k) plan administrators before their plan becomes noncompliant so that adjustments can be made.

Are Catch-up Contributions Included in the ADP Test?

While plan participants age 50 and older are permitted to make additional “catch-up contributions” to their 401(k) each year, these contributions aren’t included in calculations for ADP testing. However, Roth and other after-tax contributions are included.

What Is the HCE Limit?

What Is Top-heavy Testing?

In addition to the ADP test and ACP testing, plan sponsors are also required to conduct annual top-heavy testing. This additional type of 401(k) nondiscrimination testing prohibits company owners and high earners from owning more than 60 percent of the total plan assets.

The ADP and ACP tests are two kinds of 401(k) nondiscrimination testing that 401(k) plan sponsors are required to run each year. These tests ensure that 401(k) contributions of company owners and high earners don’t outpace those of NHCEs drastically.

Thankfully, you can avoid many of the headaches caused by failing ADP or ACP testing by using the right providers. Human Interest is one 401(k) company that alerts plan sponsors when a plan is headed towards noncompliance and also offers 401(k) safe harbor plans that are exempt from nondiscrimination testing. Visit Human Interest’s website for more information.

Dock David Treece is a finance writer and editor in the personal finance, insurance, and real estate investing space. Before his tenure at Fit Small Business, Dock’s professional background was deeply rooted in the securities and investment advisory industry.