Before you start your search for the best business laptop, you have a few decisions to make: the operating system (OS) you would like to work with, the features and performance you need, and your budget. Depending on your needs, there is a wide range of options to choose from — from powerful workhorses, to ultra-portables, and budget-friendly laptops and all points in between.

We looked at the most popular options and reviewed the Lenovo ThinkPad X1 Yoga, Apple MacBook Air, and Asus Flip C302CA Chromebook laptops in-depth below. These solutions covered a range for small businesses in terms of OS, features, and price. Read on for our comparison and review of these three options, as well as our top recommendations.

We recommend the Lenovo ThinkPad X1 Yoga as the best small business laptop in 2017 because of its combination of performance and price.

The first question to consider when you’re searching for the best laptop for your small business is which OS you would like to work with — Windows, Apple’s OS X, or Google’s Chrome.

Windows is the most commonly used OS, especially among businesses. Its high adoption rate means that it’s well-supported and it’s more likely that most of your employees are already comfortable working with it.

The exception are businesses that are focused primarily on design, graphic, or other multimedia work where you’re more likely to find Apple computers (colloquially known as “Macs”) running on their proprietary OS X. That’s not to say that Macs are uncommon elsewhere, of course; the ubiquity of iPhones and iPads means that many people are already used to working within Apple’s ecosystem, so more and more are choosing Macs as well. Apple was the fifth most popular computer brand by market share in 2016.

A third option that’s relatively new in the market is Google’s Chrome, which runs on laptops that are known as Chromebooks. Chromebooks are laptops that have been stripped down to their basics. They don’t have the powerful specs of their Apple and Windows counterparts, but they perform most of their computing online in the cloud. This frees up resources so that they don’t require the fastest processors or the most memory. By taking advantage of the cloud, Chromebooks focus on accessibility, portability, and a long battery life.

For those who will use cloud-based business productivity apps, such as the Google suite, we recommend the Chromebook as the best budget laptop for your small business because you can access all of your applications much faster – and for less money – than with a Windows or Mac laptop.

However, if you expect to install software directly onto your computer and use it locally rather than online, then your choice is between a Windows-based computer or a Mac. If you don’t already know which of the two you’d prefer, we recommend Windows as it’s more widely-used. 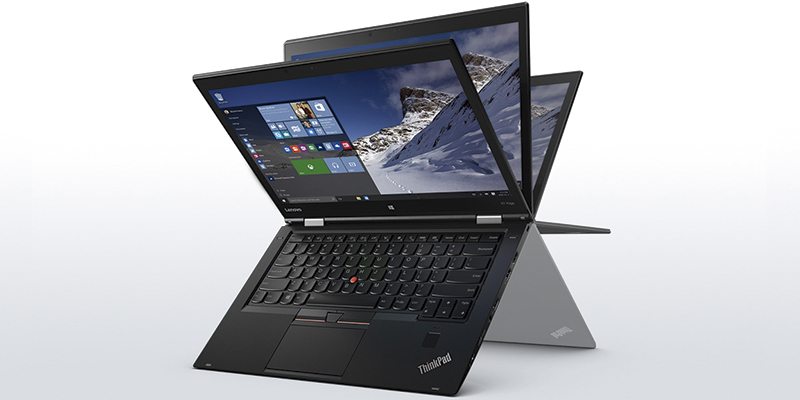 We recommend the Lenovo ThinkPad X1 Yoga as the best laptop for small businesses because of its combination of performance and price. It’s a powerful all-in-one workhorse that doubles as both a laptop and a tablet, depending on how you prefer to work or what you’re using it for at the time, and it’s fast, light, and has a solid battery life to see you through your business day.

The Lenovo ThinkPad X1 Yoga is convertible and comes with a 14” touchscreen. Like the Asus Flip C302CA Chromebook, its hinge can bend all the way back to hide the keyboard. This means you can fold it in half to use as a tablet or at a 45-degree angle in “tent mode” (picture an upside-down ‘V’) in addition to the traditional laptop configuration. While the Asus Flip C302CA Chromebook also comes with a convertible touchscreen, the Lenovo ThinkPad X1 Yoga also includes a stylus and its touchscreen is 1.5” bigger than the Asus’.

On the surface, the Lenovo ThinkPad X1 Yoga looks impressive with a carbon fiber lid and a magnesium alloy body. But of course, it’s what’s inside that counts. An Intel Dual Core i5-6200U processor at 2.3 GHz, 8GB of RAM, and a 256GB solid-state hard drive outperform most other laptops at a similar price point, including both the Apple MacBook Air and the Asus Flip C302CA Chromebook, and will deliver more than enough power for most small business users, now and in the future.

The Lenovo ThinkPad X1 Yoga is also the only laptop we reviewed that passes the MIL-STD 810G standard durability tests that are required for a laptop to be considered for government or military use. This means that it holds up against bumps, drops, dust, humidity, and extreme temperatures (both hot and cold). The keyboard is also spill-resistant.

The Lenovo ThinkPad X1 Yoga is more powerful and versatile than both the Apple MacBook Air and the Asus Flip C302CA, but this comes at a cost — both literally, as it’s the most expensive of the three, and figuratively, as it has the shortest battery life. That said, at 8.5 hours, the battery should still get you through most, if not all, of your workday without a charge.

The Lenovo ThinkPad X1 Yoga’s combination of solid design features and sophisticated set of components makes it our recommendation for the best laptop for small businesses. 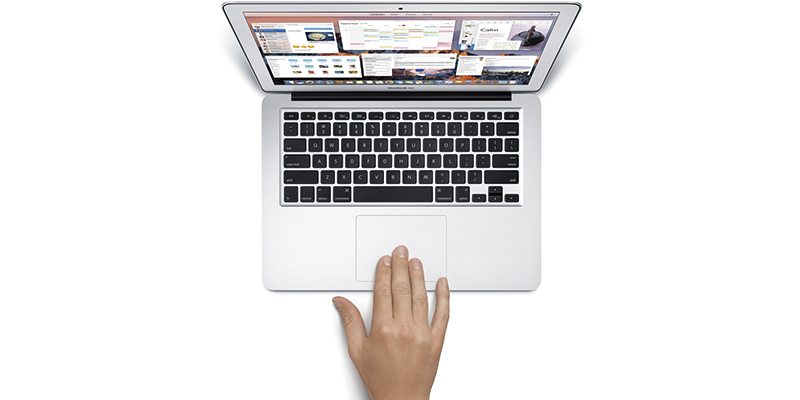 We recommend that Apple Macbook Air as the best laptop for portability. While not quite as powerful as the Lenovo ThinkPad X1 Yoga or as light as the Asus Flip C302CA Chromebook, it strikes a good balance between the two and comes with the longest lasting battery of the three laptops we reviewed.

The Apple MacBook Air delivers both form and function. Its aluminium unibody design is sleek and design-forward, and an Intel Core i5 processor at 1.6 GHz, 8GB of RAM, and a 128GB hard drive will power OS X and all of the productivity apps your small business needs with ease. These components fall short of the Lenovo ThinkPad X1 Yoga, but you’re sacrificing some power with the Apple MacBook Air in favor of more portability and battery life — not to mention just over $500 in price.

The Apple MacBook Air’s battery life is its most notable asset — not to discount its other features, but with an advertised life of 12 hours and some independent tests showing upwards of 17 hours, it blows away even the Asus Flip C320CA Chromebook. If you need an ultra-portable laptop, whether you work remotely or are often visiting clients, the Apple MacBook Air is your best choice.

One of the other primary advantages to the Apple MacBook Air is Apple’s OS X operating system and the productivity software that comes bundled with it. If you’ve ever used an iPhone or an iPad, then OS X will already look and feel familiar. The user interface and experience are very similar and are designed so that the devices integrate seamlessly.

OS X also comes preloaded with iWork. iWork is Apple’s productivity suite, which includes programs like Keynote, Numbers, and Pages — their versions of Microsoft’s PowerPoint, Excel, and Word, respectively. Of course, if your business prefers Microsoft Office, it will work perfectly fine on a Mac — however, iWork doesn’t require a paid subscription like Office 365 does.

It should also be noted that Apple computers are known for retaining their value and performance for longer than most Windows-based machines and your business may not need to upgrade as soon as you would with another brand of laptop. 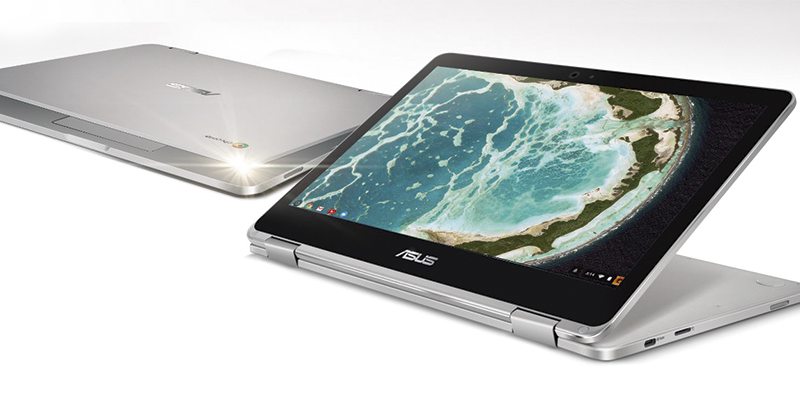 We recommend the Asus Flip C302CA Chromebook as the best budget laptop for small businesses. While it’s on the more expensive side for a Chromebook, it’s still priced at or below what you would expect for an entry-level Windows-based laptop and offers an impressive value.

Like the Lenovo ThinkPad X1 Yoga, the Asus Flip C302CA has a touchscreen and convertible design so you can use it in multiple configurations. The Intel Core m3-6Y30 CPU at 900 MHz and 4GB of RAM aren’t as powerful as what the Lenovo ThinkPad X1 Yoga or Apple MacBook Air offer, but because Chromebooks rely on web-based applications it’s not quite an apples to apples comparison. They deliver plenty of processing power to support most of the web-based applications that your small business will use. And when the Chrome OS rolls out support for the Google Play Android app store later this year, you’ll be able to download and run almost any Android app on the Asus Flip C302CA so there is no limit to your business’ productivity.

While the Asus Flip C302CA’s battery provides a 10-hour charge, which is good for a laptop in general, it’s on the lower-end of what you should expect from an ultra-portable. The Apple MacBook Air excels in this area and beats the Asus in both its published battery life at 12 hours and in independent tests where it has delivered over 17.

If budget is your primary concern, or if you’re looking for an ultra-portable laptop and expect to do most of your work while connected to the internet, then we recommend the Asus Flip C302CA Chromebook. It’s a cost-effective way to offer your employees an ultra-portable and powerful computing solution.

There are many other laptops for small businesses options on the market that may be a better fit for your business’ needs. Here are some of the others that we liked and what makes them unique:

Although it’s the most expensive laptop of the three we reviewed, the Lenovo ThinkPad X1 Yoga is competitively priced compared to the market as a whole — especially considering its impressive list of features. With a 14” convertible touchscreen, sturdy and attractive construction, and plenty of power under its hood to handle any of your small business needs, the Lenovo ThinkPad X1 Yoga is our recommended best laptop for your small business. 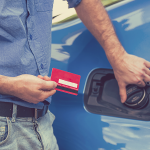