Global business travel spending is expected to grow from $1.2 trillion in 2015 to $1.6 trillion by 2020. Even as many businesses move day-to-day operations online, there’s no substitute for building new and existing relationships offline, and in-person. As business professionals are deployed around the world, their productivity and expenses, as well as the quality of their experiences, can vary widely from one city to another.

In this article, we looked at 100 global cities to identify which are the best-equipped to handle the demands of traveling employees. We analyzed data from sources such as Business News Travel, Cvent, FlightStats, and the Federal Aviation Administration to calculate a definitive ranking of the best cities in the world for business trips.

In ranking these cities, we looked at seven metrics to measure the quantity and quality of a city’s amenities for business travelers:

Read on to see which cities made the top 10. 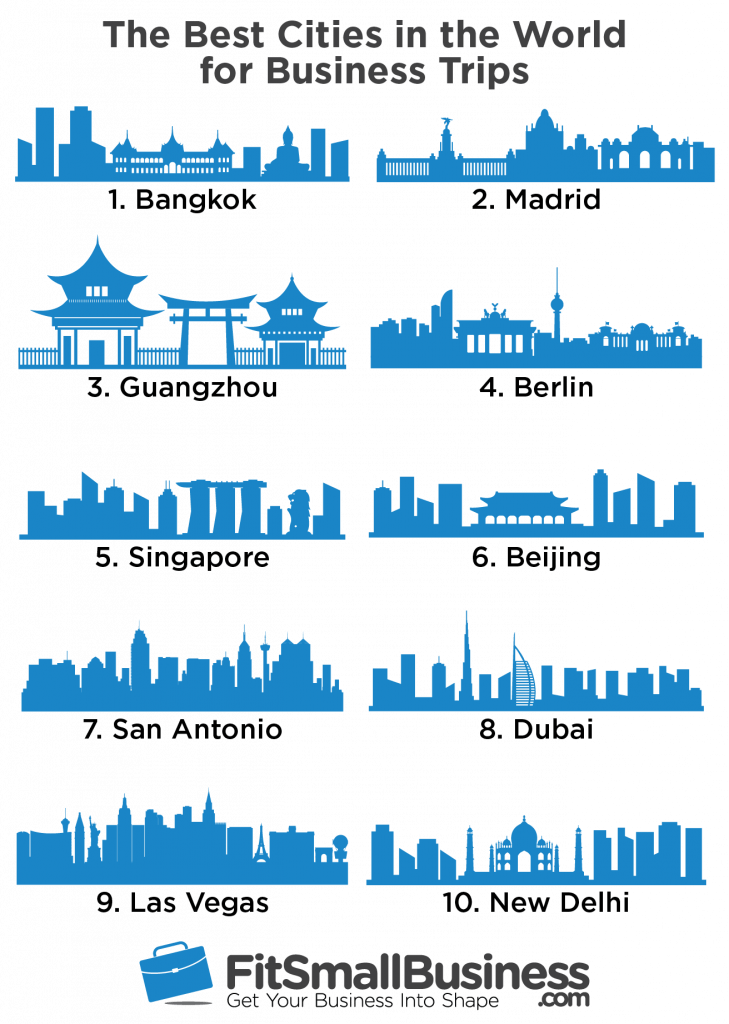 The capital of Thailand is the best city in the world for business trips as it’s the only city to post top 10 rankings in six different categories. The average hotel cost in Bangkok is $130.58 making it the seventh least expensive. In addition, there are 538 hotels in the city with a total of 89,212 sleeping rooms to rank eighth in both categories. In 2017, there were 833,082 flights in and out Bangkok to place ninth in the category. 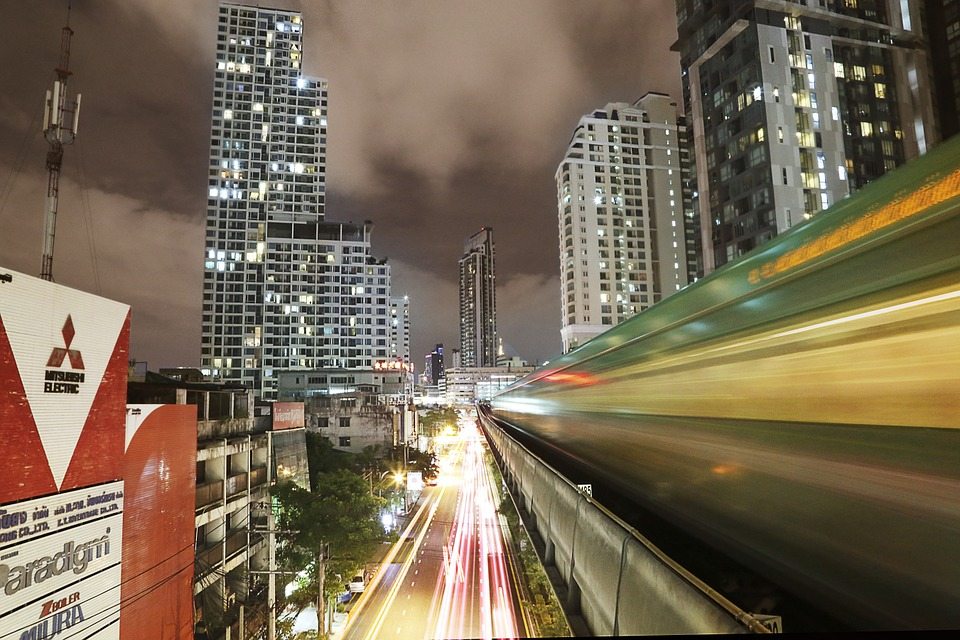 Coming in at number two is the capital of Spain with top 25 rankings in five different categories. Madrid is home to 384 hotels with a total of 41,534 sleeping rooms to finish 15th in both categories. The city offers one of the most affordable food costs with an average of $81.87 for three meals, including drinks and desserts. If you’re traveling to Madrid, your arrival and departure are very likely to be smooth as the on-time percentage of its airport stands at 87 percent to rank 22nd. 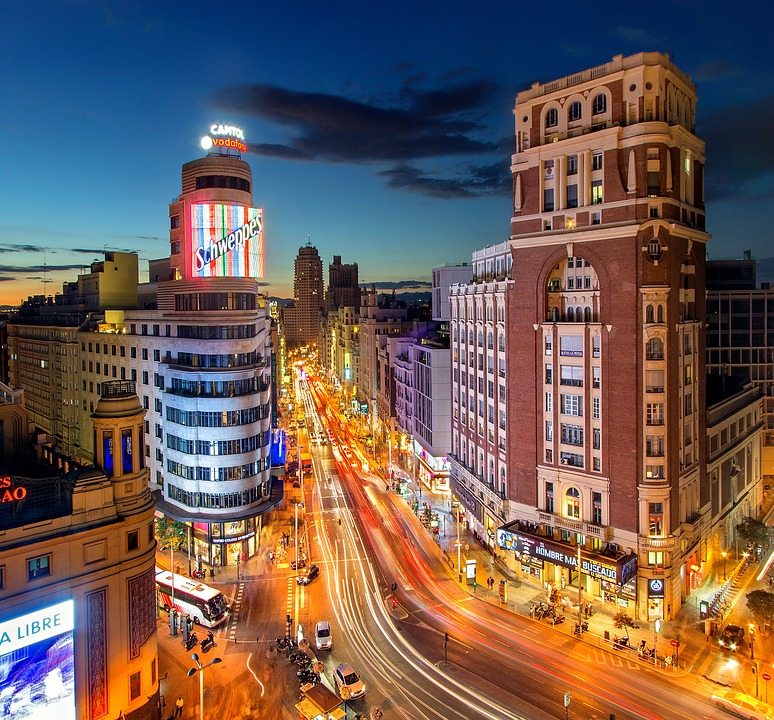 Capping off our list of podium finishers is the Chinese city of Guangzhou, buoyed by top 20 rankings in five different categories. Food in the Chinese city is one of most affordable. For three meals with drinks and desserts, business travellers spend an average of $73.57 to place seventh. Accommodations are also cost-efficient as a hotel room costs $133.11 on average to come in 10th. The number of hotel rooms in the city is one of the highest in the world at 56,382 to rank 12th.

The capital of Germany lands at number four as it finished within the top 20 in four different categories. In Berlin, there are 137,297 hotel sleeping rooms to rank second in this category. With so many hotel rooms, it only makes sense that it has plenty of hotels; Berlin is home to 774 hotels to place fourth. With an abundance of hotels and rooms, pricing is competitive. Businesses pay $137.31 on average for a hotel room in the city to place 15th. 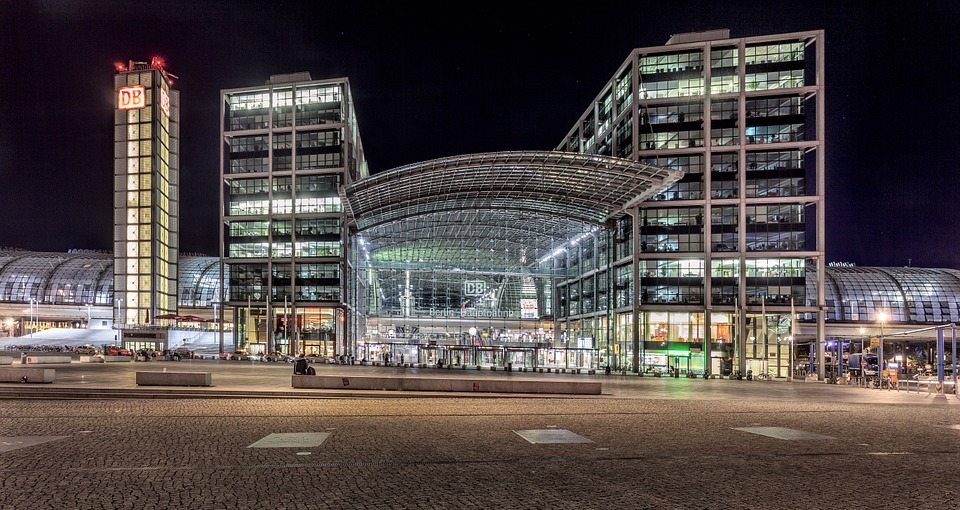 The city-state grabs the fifth spot with top 25 rankings in three different categories. There are 64,170 hotel sleeping rooms in Singapore to finish 11th in the category. The abundance of rooms contributes to their affordability as a hotel room in the city costs $137.01 on average to come in at number 14. Also, car rentals in Singapore are economical as it stands at $35.82 on average to finish 23rd. 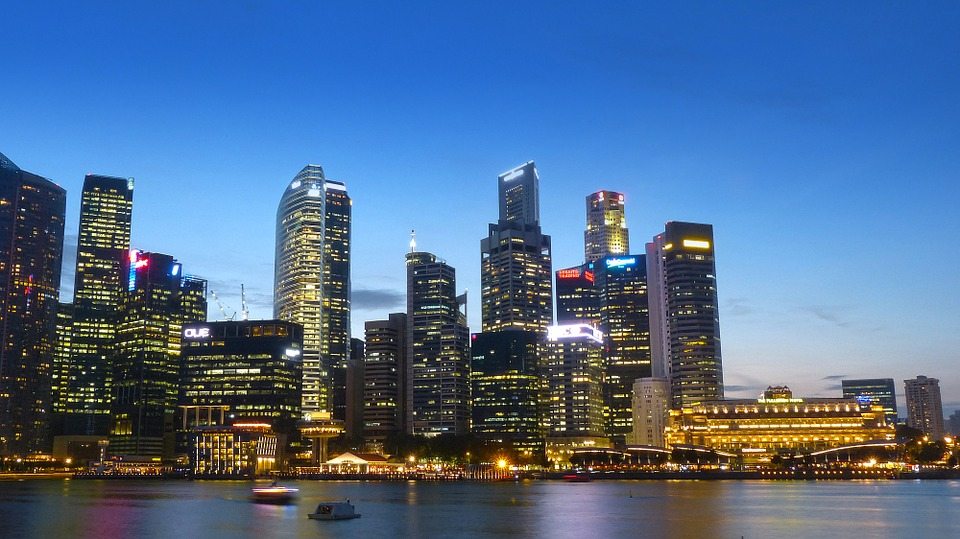 The Chinese capital grabs the sixth spot bolstered by top 20 finishes in five different categories. Beijing touts 127,140 hotel sleepings rooms to place third. Those rooms are housed in the 704 hotels in the city to rank fifth. Getting around in the city won’t put a dent in your business expense account as car rental costs $29.46 on average to finish 13th. 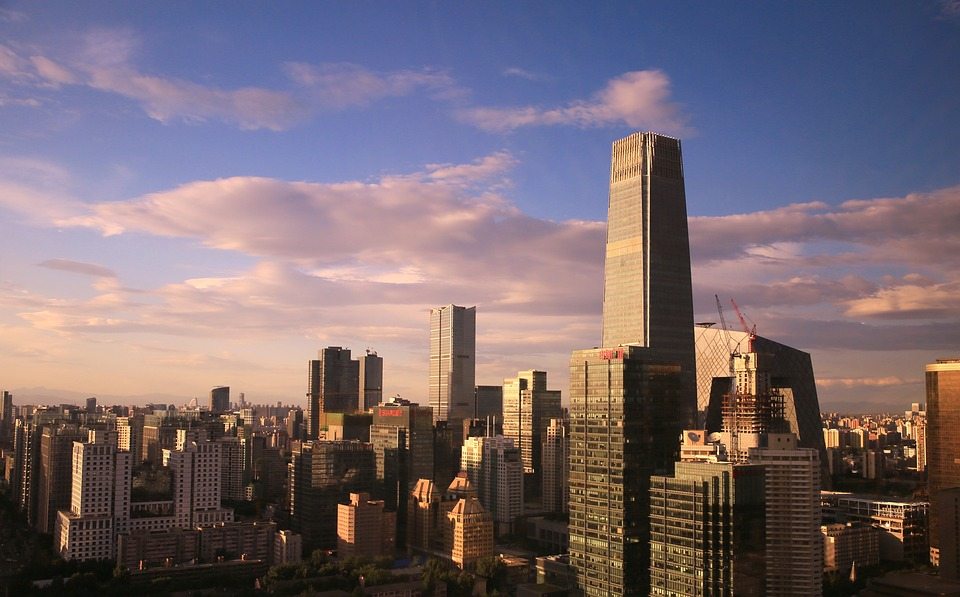 San Antonio is the best city for business trips in the US as it ranked within the top 25 in four different categories. Your flight arriving or departing late is highly unlikely as San Antonio has an on time percentage of 87.35 to rank 17th in the category. On top of that, the city can accommodate large of numbers of business travelers with its 36,537 sleeping rooms housed in 275 hotels to rank 19th and 22nd in each category respectively. 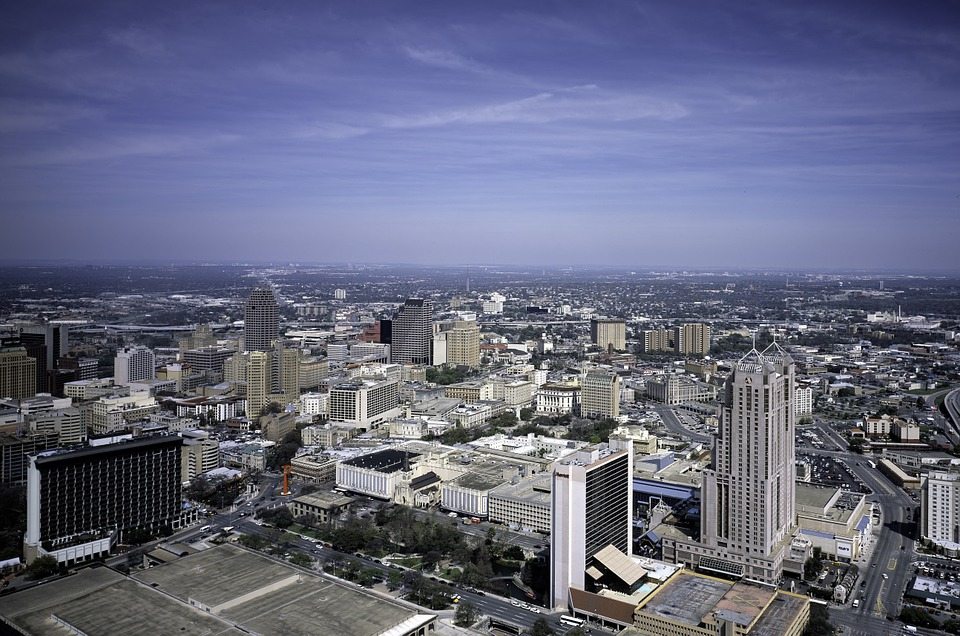 The capital of the Emirate of Dubai takes the eighth spot propelled by top 10 rankings in three different categories. Dubai is home to 681 hotels to rank sixth in the category. These hotels have a total of 102,000 sleeping rooms to also place sixth. Lastly, car rental costs are the second lowest in the world at $15.24. 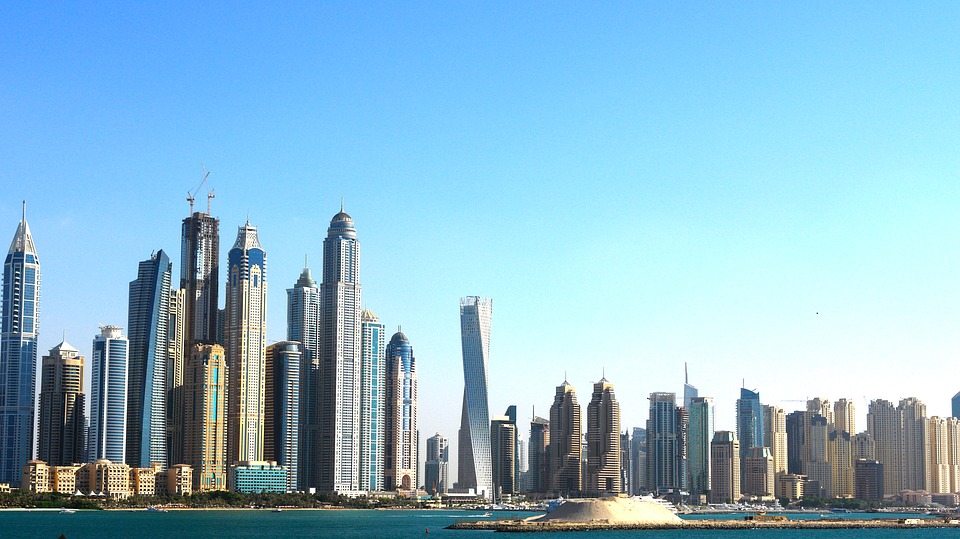 The Sin City is the second city in the US in our top ten list with strong finishes in two heavily weighted categories. Las Vegas has the most number of hotel rooms in the world with 141,688 sleeping rooms. As the city is a popular business destination, its number of air travel operations is one of the highest in the world. In 2017, there were 1,035,115 landings and takeoffs recorded in the city’s major airport to rank sixth in the category. 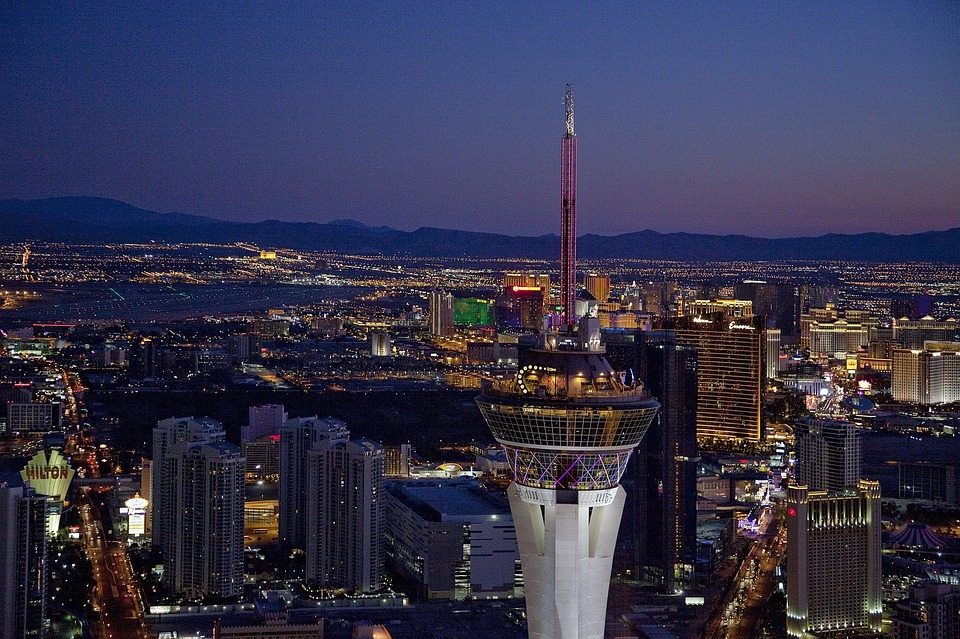 The capital of India concludes our top ten list with top 10 finishes in four categories. Getting around in the city won’t hurt your expense account as car rentals cost $9.15 on average to rank first in the category. Also in New Delhi, food is very affordable at $71.51 to place fifth. Hotels are also cost-efficient as a room will only set your company back $131.68 on average to finish eighth. 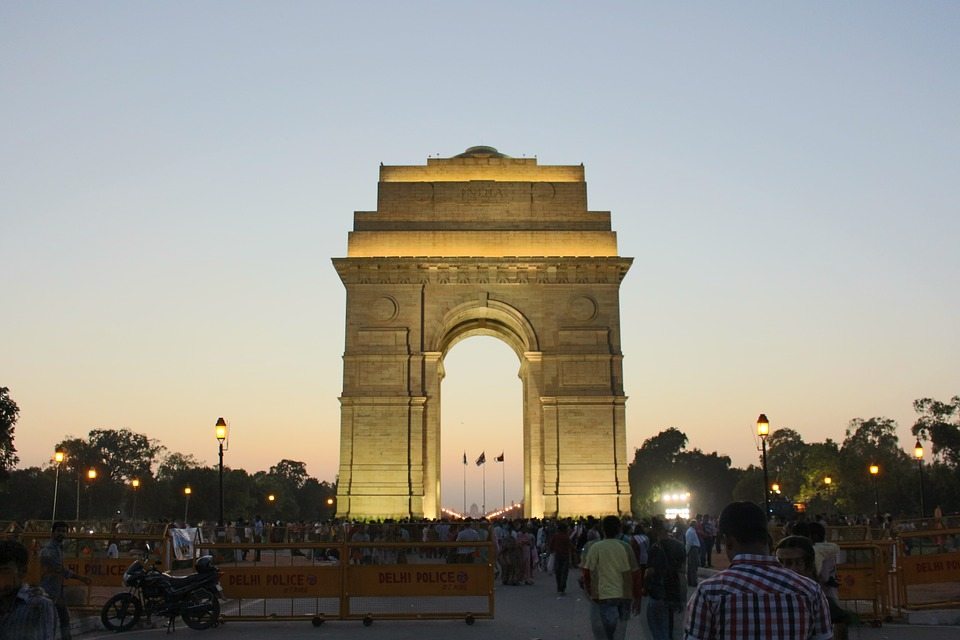 We based our ranking of the most popular cities for business trips on seven metrics. We then analyzed the data and assigned the following weights for each category based on the category’s importance:

This metric provides the total number hotel rooms in a city. We gave this metric the highest weight because cities with more sleeping rooms are in a better position to accommodate the lodging demands of business travelers. In addition, cities with more rooms suggest that they are popular destinations for corporate travelers.

This metric provides the total number of hotels in a city. We also assigned the highest weight to this metric because the number of hotels in a city complements the number of sleeping rooms. It provides a better picture of a city’s ability to handle both the lodging needs and preferences of corporate travelers. Cities that ranked high on this metric are better-equipped to meet demands of corporate travelers looking for various price points.

Accuracy of Arrivals and Departures – 17.5 percent

This category is the total number of landings and takeoffs in the city’s primary airport, excluding military operations. We included this metric in our analysis because air travel operations can be a good measure of business activity in the city. Cities that placed high on this metric have more arrivals and departures. This shows that airline companies direct more flights in and out of these cities because there’s demand.

This category is defined as the average hotel costs for business travelers. We included this metric in our analysis because hotel expenses can represent a significant portion of the company’s budget for business trips. Cities that ranked high on this metric offer affordable hotel rates.

This metric is defined as the average expenses related to car rental. We included this metric in our analysis because, just like food expenses, car rentals are also considered when coming up with a budget for a business trip. Nevertheless, we also gave it the lowest weight because car rentals take a relatively small percentage of the business travel budget.

Accuracy of Arrivals and Departures

The US Department for Transportation provided the data for US cities for this category. The agency publishes the Air Travel Consumer Report on a monthly basis which provides the on-time arrival and departure percentage by airport. We used the December 2017 report for our analysis.

For global cities, we used a number of resources to calculate the accuracy of arrivals and departures per city. We relied on reports provided by databases such as FlightStats or AirHelp to get the performance of each city in this metric.

Cities with a high percentage of arrivals and departures received higher rankings.

The Federal Aviation Administration (FAA) was our data sources for this metric for US cities. Using the FAA’s Air Traffic Activity Database System (ATADS), we gathered data on the number of landings and takeoffs recorded for 2017 by airport. For global cities, we sourced data from the website of the city’s primary airport. Cities that have high total air travel operations were given higher rankings.

For this metric, we used data provided by Business Travel News (BTN) which publishes the Corporate Travel Index every year. The report provides data on the average costs paid by corporate clients of BCD Travel’s Advito consultancy for hotel accommodation for US and non-US cities. We used 2017 figures for our study. Cities with lower hotel costs received higher rankings.

BTN was also our data provider for this metric. In addition to hotel costs, the Corporate Travel Index also provides data on the average food expenses paid by businesses. Total food expenses were based on the sum of costs of three meals with drinks and desserts. Cities with low food costs received higher rankings.

Our analysis revealed that Asian cities are better equipped to handle the demands of business travel by providing affordable hotel, car rental, and food costs. While a few US and European cities made it to the top 20, many of them fell to the bottom 50 of our list.

What are your thoughts about the results of our research on the best cities for business trips? Feel free to share your comments below.