Kiah is a licensed attorney with experience in real estate development. Her expertise is featured across Fit Small Business in real estate, marketing and starting a business content.

“Gig jobs,” like those performed by freelance drivers for Uber, account for about 34 percent of the United States workforce by at least one measure, and are expected to account for 43 percent by 2020. That stat and many others paint a picture of a workforce that is increasingly piecing together income from one or a variety of sources that pay per task rather than traditional salaried jobs – the so-called “gig economy.”

With the percentage of gig workers surging toward half the U.S. workforce, we set out to create the definitive list the country’s top gig employers. There are of course a variety of ways to measure this. Because so many gig workers value flexibility, quality of life outside work, and the ability to balance several gig jobs at once, our study was aimed at identifying the companies that are the easiest to start with and accessible to the most people. And of course, we wanted to know who pays the best.

What we found was surprising. Some of the best-known gig employers, like Uber and Airbnb, ranked at the lower end of our survey because the need to own a car (Uber) or home (Airbnb) are barriers that many job seekers can’t meet. And in the case of Uber, the company takes a much higher commission from each job than many others we analyzed.

We found the top gig employers offer jobs you can do yourself, like Care.com, which takes no commission from its gig workers and has a nationwide network accessible to millions of nannies, housekeepers, and tutors. The best gig employers offer service-based jobs like TaskRabbit and the dog-walking service Rover, which have good pay and flexible schedules but don’t require barriers to entry like owning a car.

To create this list, we scoured job sites to find all of the available gig employers, removing those that don’t operate in the U.S. or don’t meet our minimum criteria. We then narrowed it down to 30 employers and ranked them based on wages and employer commissions, geographic availability, quality of life, barrier to entry and tax implications, coming up with the best gig employers. 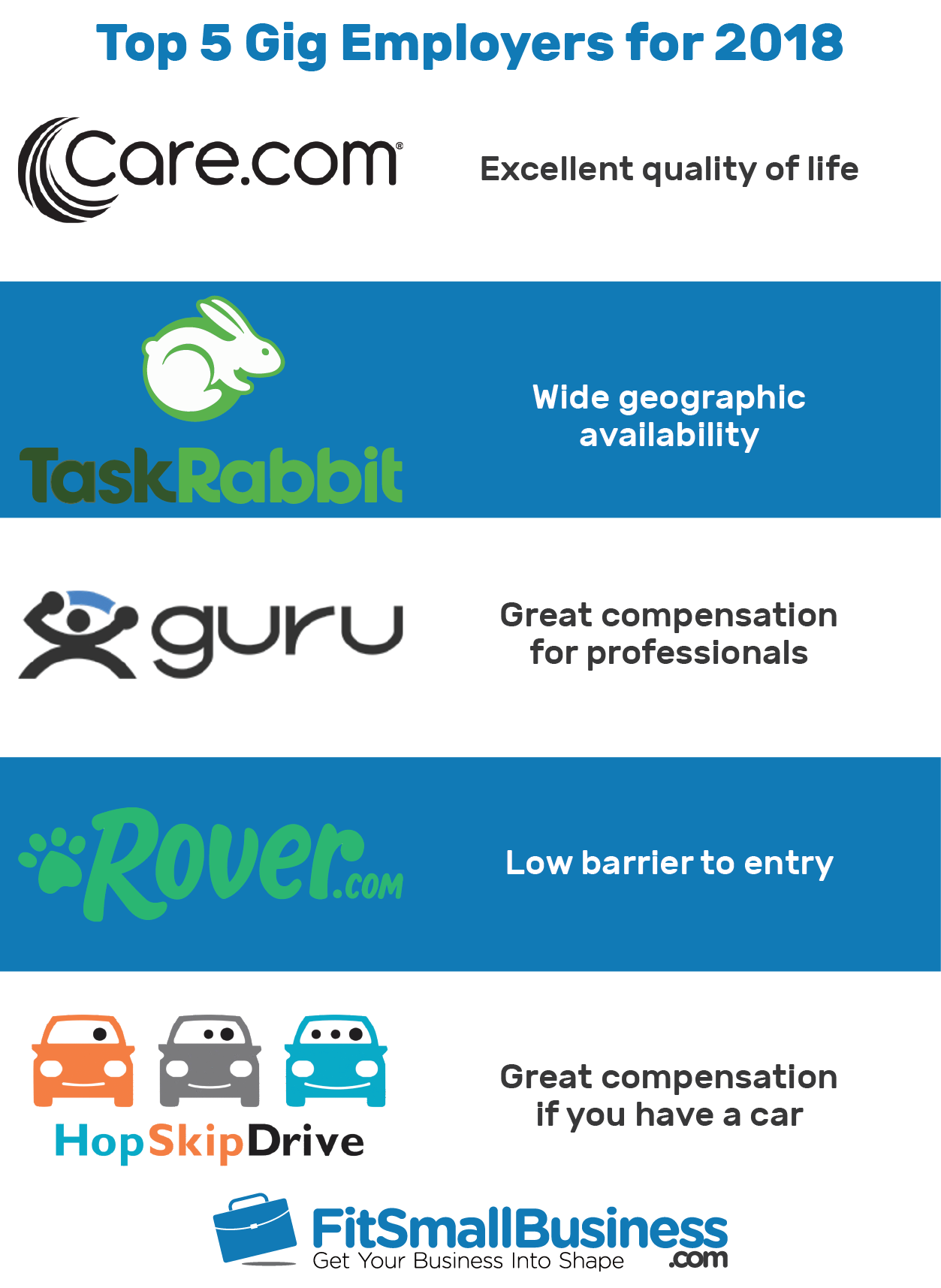 We considered the following six criteria when comparing gig employers:

Overall, the top gig employers offer moderate jobs that you can do with your hands, such as walking dogs with Rover. On the other end of the spectrum, well-known gig employers like Uber and Airbnb came in lower because they require things like car and/or home ownership, and Uber takes a high commission while others like Care.com don’t. Read on for our list of the 10 best gig employers in 2018 plus a complete ranking of the 30 employers we considered at the end. Also, check out our research methodology below to find out exactly how we ranked the gig employers below.

Care.com is a membership-based service that enables families to hire experienced babysitters, nannies, child care professionals, housekeepers and tutors. The website ranked first overall, largely due to its impressive performance in the commission, geographic availability and quality of life categories.

Although Care.com collects a membership fee from its professionals, it offers freelancers transparent fees and does not retain a commission, tying it for first place. Plus, Care.com features global availability and ranked seventh overall for quality of life thanks to an average rating of 4.15.

TaskRabbit is an online community that matches local help with people who need tasks completed, ranging from furniture assembly to shopping and delivery services. The platform, which was acquired by IKEA in 2017, ranked second overall and in the quality of life category with an average ranking of 4.25 stars.

The platform also performed extremely well for hourly pay, with taskers earning $30 per hour on average — third highest on our list. Because TaskRabbit doesn’t require gig workers to have any specialized education but may require tools or other equipment, it tied with several other employees for 25th in barrier to entry.

Guru is an online platform where high-quality freelancers connect with employers from all around the world to perform professional tasks ranging from computer programming to financial and legal services. Guru ranked third on our list because of the employer’s widespread geographic availability and highly rated quality of life.

Not only is Guru available to freelancers around the world, but it also received a 3.9-star rating on Glassdoor and a 4.2-star rating on Indeed, making it third overall for quality of life. The platform is also a terrific way to make a reliable salary as freelancers can make an average of $23 per hour, which is 10th overall.

Rover is a website dedicated to helping pet owners find experienced dog walkers and sitters. The platform also connects pet owners with doggy day care services and house sitters who are also qualified to care for dogs. Rover ranked fourth overall due to the low barrier of entry and high quality of life.

Employees of Rover gave the platform an average 4.2-star rating on Glassdoor and Indeed, making it the third-best employer for overall quality of life. Although Rover takes a 20 percent commission from its dog watchers (17th on our list), gig workers can expect to make an average of almost $18 per hour, which is 16th on our list.

HopSkipDrive is a ridesharing service created by busy families for busy families. The service connects safe, qualified caretakers with families in need of carpooling services. HopSkipDrive and its clients care about safety, and this is reflected in the average hourly pay of $30, which ranks third overall.

Although HopSkipDrive is currently only available in southern California, the Bay Area and parts of Colorado — the lowest availability of the employers we reviewed — the company performed well for barrier to entry (12th) and quality of life (14th).

Freelancer is another online platform that connects clients with an extensive network of freelance professionals. The website allows freelancers to charge professional rates for services like website development, graphic design, internet marketing and more.

The platform ranks sixth overall because of its low barrier to entry (tied for 7th), low employer commission (11th) and high quality of life (10th). Not only does Freelancer collect a low 3 percent commission from its freelancers, but it has a 4.05-star rating on Glassdoor and Indeed. 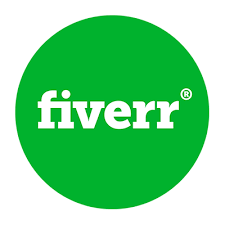 Ranking seventh on our list, Fiverr is a freelance platform that enables gig workers to charge as little as $5 for jobs. Although this low price point can increase the number of jobs you get as a freelancer, it lowers your average hourly rate to approximately $12, which is 26th on our list of 30 employers.

However, Fiverr makes up for lower earnings with extensive geographic availability (tied for first), low barrier to entry (tied for seventh) and the highest quality of life rating on our list — a 4.45 rating on Glassdoor and Indeed.

In eighth place, Favor Delivery is the highest-ranked delivery employer on our list. Favor’s clients use the service to do everything from delivering food to handling errands in less than an hour. Despite the popularity of delivery services, Favor is only available in 22 markets, making it 26th on our list for geographic availability. However, the employer doesn’t collect a commission from its runners (tied for first), and the service pays well, with runners earning an average of $24.50 per hour (eighth on our list).

As one of several professional freelancing platforms on our list, Upwork ranks ninth because of the platform’s medium barrier to entry (tied for seventh), extensive geographic availability (tied for first) and moderate hourly wage (14th) and quality of life rating. The employer ranks 15th overall for quality of life with an average rating of 3.9 stars.

Although not among the highest wages on our list, Upwork also offers employees an average of $18.45 per hour. However, fees vary widely based on the individual freelancer.

DoorDash, which is ranked 10th overall, is a food delivery employer that services more than 60 markets in the U.S. Because the employer does not collect a commission from its drivers, the company ranks high in that category (tied for first). What’s more, the average hourly wage is eighth highest on our list at $24.50.

Like some of the other employers that made our list, DoorDash doesn’t have a phenomenal quality of life rating (18th overall). However, the employer offers accessible employment for above-average compensation.

We based the ranking of the best gig employers on six criteria and ranked employers for each. Then, each of the six criteria was given a weight based on its importance when choosing a freelance gig employer. We then multiplied the weight for each criterion by each employer’s ranking to come up with the weighted ranking, adding each category together to come up with an overall score, which was used to rank each employer.

The six criteria we used to identify the 30 best gig employers in 2018 are:

This metric represents how much a gig freelancer can make working for each employer we considered and is illustrated by the average dollar amount earned by gig employees on an hourly basis. For employers where an hourly wage is not applicable, the average annual salary was divided based on 40 hours per week and 50 weeks per year. Data regarding average wages were taken from employer websites and employee review websites.

The employer commission is the percentage that each gig employer takes from fees collected by the gig freelancer. These data were obtained from a combination of employer websites and employment review websites including Glassdoor and Indeed. Then, we ranked each employer based on how much they take from employees, with the highest commissions ranking last.

Whether an employer is present in a variety of markets is another strong indicator of its viability for gig freelancers. Here, geographic availability is represented by the number of markets in which each gig employer is active. Employers like Fiverr, Freelancer, Airbnb, Etsy and other employers that are available globally all tied for first place in the category.

Barriers to entry can make or break a freelancer’s ability to gig for a company. Companies that require freelancers to own a home or car have a much higher barrier to entry than those that merely require the use of a bicycle or computer. To evaluate the barrier to entry, we categorized each gig employer into one of five tiers:

Each employer was ranked based on whether gig workers are taxed on their earnings as W-2 or 1099 employees. During our research, we discovered that every employer we evaluated treats gig workers as 1099 freelancers, so the criteria had an equal impact on each employer’s score. However, because taxes are an important element of gig employment, we kept these data in our algorithm.

Gig freelancing has gained popularity during the last several years, and it continues to grow. However, some gig employees offer higher pay, greater flexibility, higher quality of life, larger geographic scope and greater accessibility than others. The highest-ranking gig employers on our list include Care.com, TaskRabbit and other companies that offer good work-life balance and limited “barriers to entry” like owning a car or house.