This article is part of a larger series on Small Business Websites.

Bluehost and DreamHost are leading web hosting providers that give businesses the tools to build and maintain a professional website. Bluehost is best known for its low-cost, all-inclusive plans that come with everything you need to build a new website from scratch, whereas DreamHost stands out for its fast and reliable hosting with contract-free plans.

Bluehost vs DreamHost at a Glance

How We Evaluated Bluehost & DreamHost

Bluehost and DreamHost both offer quality web hosting with very similar plans and features, and it can be difficult to choose the right one. To help, we compared Bluehost vs DreamHost by looking at price, ease of use, storage and bandwidth limits, inclusions such as free domain names and SSL certificates, reliability, speed, customer support, and customer reviews.

To compare Bluehost vs DreamHost, we considered:

Based on the criteria above, we recommend DreamHost. Whether you’re looking for an ultra-low-cost plan with a long-term commitment or a contract-free, month-to-month plan, DreamHost has a plan for you. On top of that, it’s known for its reliability, and plans include unlimited storage and free daily backups.

What it costs: Bluehost offers low-cost web hosting plans starting at $2.95 per month with a 36-month contract or $4.95 per month with an annual contract. All plans include a free domain name, an SSL certificate, business email hosting, and one-click WordPress installation. Bluehost plans are feature-rich and low cost, making them a great value.

What it costs: DreamHost has web hosting plans as low as $3.95 per month with a 12-month contract. For this price, users get shared hosting for one site with unlimited storage and bandwidth as well as many extras, such as a free domain name, an SSL certificate, one-click WordPress installation, and automated daily backups.

Takeaway: DreamHost wins when it comes to price. Not only does it cost less for its long-term plan, but it also offers affordable contract-free plans—on top of including unlimited storage.

When choosing a web hosting plan, look at features and inclusions to determine value for price, as opposed to basing your decision on price alone. Both Bluehost and DreamHost are known for being low-cost, feature-rich plans, but each offers different inclusions. For example, DreamHost includes unlimited storage and free daily backups, whereas Bluehost offers support via phone and business email.


* Unlimited storage indicates no limits on the size or number of website files and content. Unmetered bandwidth indicates that while there is likely a speed cap on data transfer or site load times, you can transfer as much data as you would like. This makes it possible to handle significant site traffic.

* Unlimited storage indicates no limits on the size or number of website files and content. Unmetered bandwidth indicates that while there is likely a speed cap on data transfer or site load times, you can transfer as much data as you would like. This makes it possible to handle significant site traffic.

Ease of Use: Bluehost vs DreamHost

While both Bluehost and DreamHost are nearly identical in terms of the services they provide—such as one-click WordPress installation—they vary when it comes to the details. For example, each provider offers a different interface, frequency of backups, as well as whether or not features such as WordPress and SSL certificates come pre-installed.

Bluehost Ease of Use 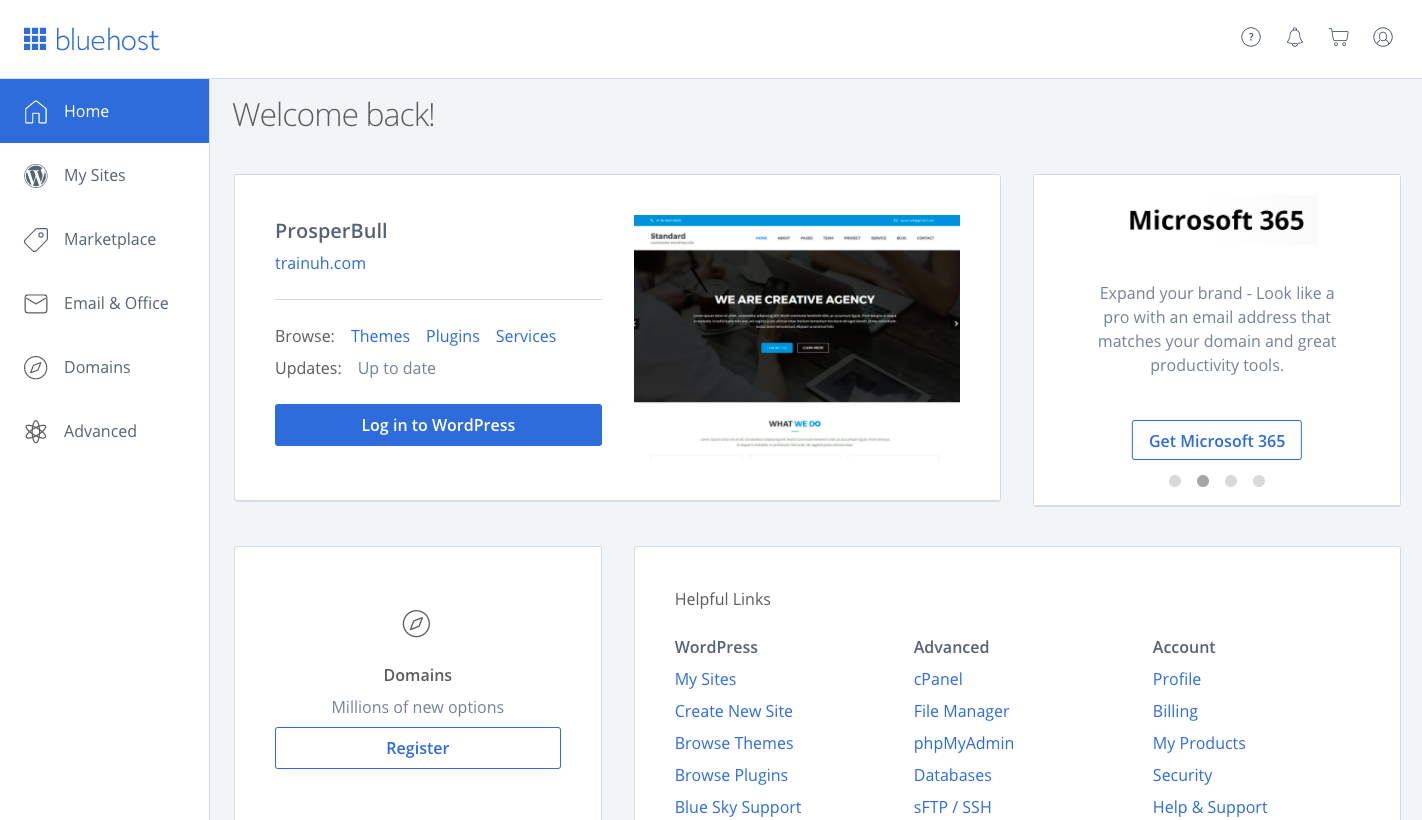 Bluehost is generally considered to be an easy-to-use, cPanel-based web hosting provider, known for its plans that come with everything from a free domain name to a free SSL certificate. Plans also include one-click WordPress installation, which makes it easy for users to connect their web hosting plan to a WordPress account without any technical experience. The downside is that Bluehost’s user interface is so comprehensive it can feel a bit clunky and dated.

DreamHost Ease of Use 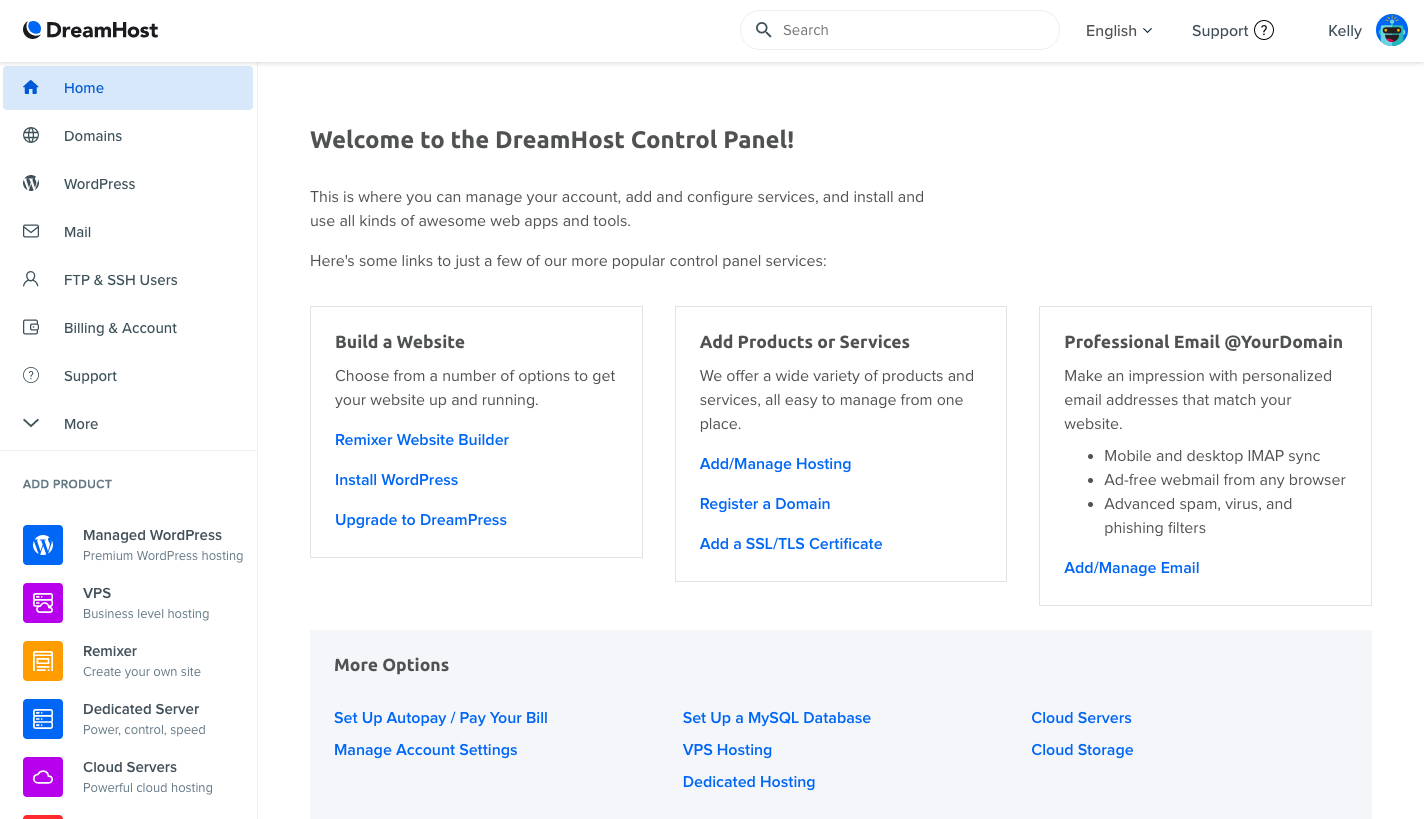 DreamHost is a very user-friendly web hosting provider with a sleek interface and plans that include many extras that make using it simple and hassle-free. It even offers a web hosting plan designed for businesses that have sites built in WordPress, which includes many WordPress-centric features, such as free site migration and a designated WordPress support team.

Takeaway: When it comes to ease of use DreamHost is the winner. Its interface is more modern and user-friendly and it also includes additional features such as daily backups and pre-installed SSL certificates in certain plans, furthering its ease of use.

While not many don’t think of support when choosing a provider, it matters when you need it. Bluehost and DreamHost are generally comparable in terms of support quality, though this doesn’t mean they’re equal in the channels in which support is offered. Bluehost offers support via phone, chat, forums, and email; DreamHost only offers support via an online ticketing system, live chat, knowledge bases, and community forums.

Takeaway: When in need, phone remains the best form of support, so Bluehost beats DreamHost, given that it offers live support via phone.

Bluehost and DreamHost are similarly rated by users: Bluehost has a 4.1 out of 5-star rating and DreamHost has a 4.2 out of 5-star rating. DreamHost users like its reliability as well as its user-friendly interface and inclusion of short-term contracts. Bluehost is highly regarded for its ultra-low-cost pricing on long-term contracts, but users note it has a less user-friendly interface and occasional downtimes.

Takeaway: DreamHost wins out over Bluehost in terms of customer reviews given that it has a higher average rating and that users rave about its reliability, which is key for web hosting.

What are the best web hosting providers?

There are many web hosting providers out there, but those that are most frequently regarded as the best are HostGator, Bluehost, SiteGround, GoDaddy, and DreamHost. Each provider offers different services, plans, features, and inclusions. You can learn more about these services by checking out our guide on the best web hosting companies.

How does Bluehost compare to HostGator?

Bluehost and HostGator are both leading web hosting providers that offer comprehensive plans at affordable prices. Where they differ is that Bluehost is slightly cheaper and includes more extras, such as a free domain name, whereas HostGator includes unlimited storage and bandwidth. Read the full breakdown on Bluehost vs HostGator.

There are two main options when it comes to building your own business website: using a drag-and-drop site builder, such as Squarespace or Wix, or using a content management system (CMS) like WordPress. Both require setting up a domain, choosing a template, and customizing your site, but there are different steps to follow for each. Get the step-by-step instructions on how to build a small business website.