As more states approve cannabis for use, an entirely new market has cropped up in the United States. Medical dispensaries, as well as recreational shops, are opening to supply marijuana to a broad base of consumers. However, what exactly does this market look like, and what can we expect from it in the near future? 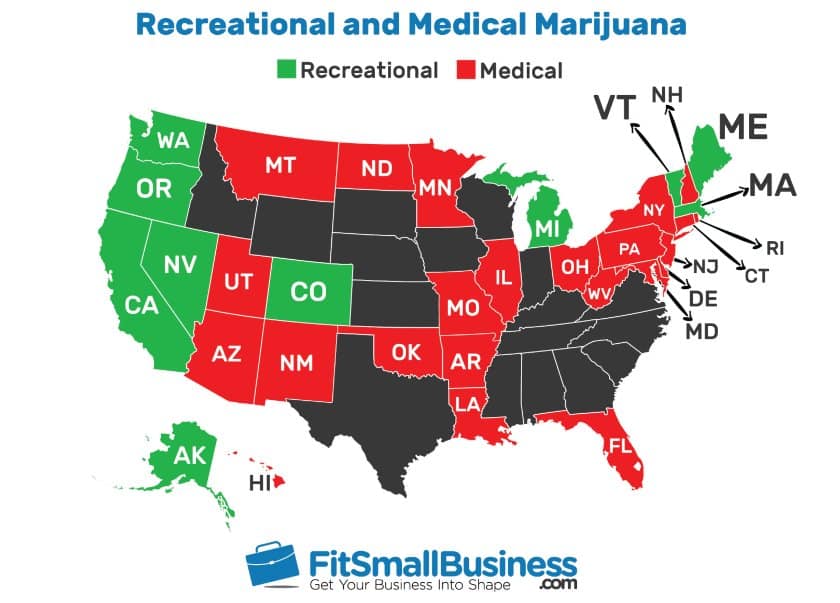 As of November 2018, 10 states have legalized recreational cannabis while 33 have approved it for medical uses.

Legal cannabis is on the rise. Out of all 50 states, 43 allow some form of marijuana use, although the majority of them only allow it for medicinal purposes. However, 10 of these so far have legalized marijuana across the board, with more states pushing to follow suit.

Times have changed since the early 2000s when most people looked down on making cannabis legal. Now, around six in every 10 Americans thinks that marijuana should be acceptable ― and accessible.

According to Gallup, 51% of Republicans support cannabis legalization.

Marijuana has officially crossed party lines. The Democratic party has long been considered the main supporter of cannabis legalization efforts, but now even a small majority of Republicans have joined in to further the cause.

Sales of legal cannabis in the U.S. amounted to nearly $10 billion in 2018 alone.

Most of us already realized that the marijuana industry was huge, but this figure tells us just how expansive it is.

During this year, of the 10 million cannabis users, 6 million were men, and only 4 million were women. This trend has appeared to be consistent even in more recent surveys.

There are 9,397 active licenses for marijuana businesses as of 2017.

From dispensaries and retailers to cultivators and deliverers, the cannabis industry as a whole employs more than 100,000 individuals. As the market continues to grow, this will mean more business and employment opportunities nationwide.

This is considerable growth for only a year’s time and, although we don’t yet know the growth statistics for 2018, we can expect it to still be on the rise. This growth is in spite of the limited access to insurance for cannabis businesses and other financial services. [https://www.forbes.com/sites/thomaspellechia/2018/06/26/in-2017-beyond-u-s-enjoys-the-highest-legal-cannabis-market-share-worldwide/#3b9003782d20]

The U.S. accounts for 90% of the global marijuana market.

We’ve seen how substantially the market is growing, but did you know that the U.S. counts for the majority of it? This is where the most demand and highest sales are, making it the ideal place for small dispensaries to take root and thrive. [https://www.forbes.com/sites/thomaspellechia/2018/06/26/in-2017-beyond-u-s-enjoys-the-highest-legal-cannabis-market-share-worldwide/#3b9003782d20]

In the cannabis industry, women hold around 36% of executive positions as opposed to only 15% in other industries.

The legal marijuana market has proven to hold a wealth of opportunities for female entrepreneurs and leaders ― so much so, in fact, that there are now even professional networks specifically for women in the cannabis industry.

The average price for an ounce of high-quality marijuana in the U.S. is $320.

Although some states range as high as $600 per ounce and others go as low as $210 per ounce, the U.S. average falls around $320 for one ounce of high-quality cannabis. Lower-quality cannabis naturally means lower prices, but this stat still shows how incredibly lucrative this industry can be.

The startup cost for a regulated cannabis dispensary is approximately $775,000.

By contrast, an unregulated dispensary typically has startup costs of closer to $100,000. While these costs may seem steep, the following revenue statistic shows just how valuable this investment can be.

A regulated dispensary averages about $3 million per year in revenue.

To put this in perspective, only about 9% of small, full-time businesses average more than $1 million in annual revenue. That’s quite a difference.

We’ll let you do the math on this one to see what that comes to in profit. Let’s just say it’s pretty darn good. 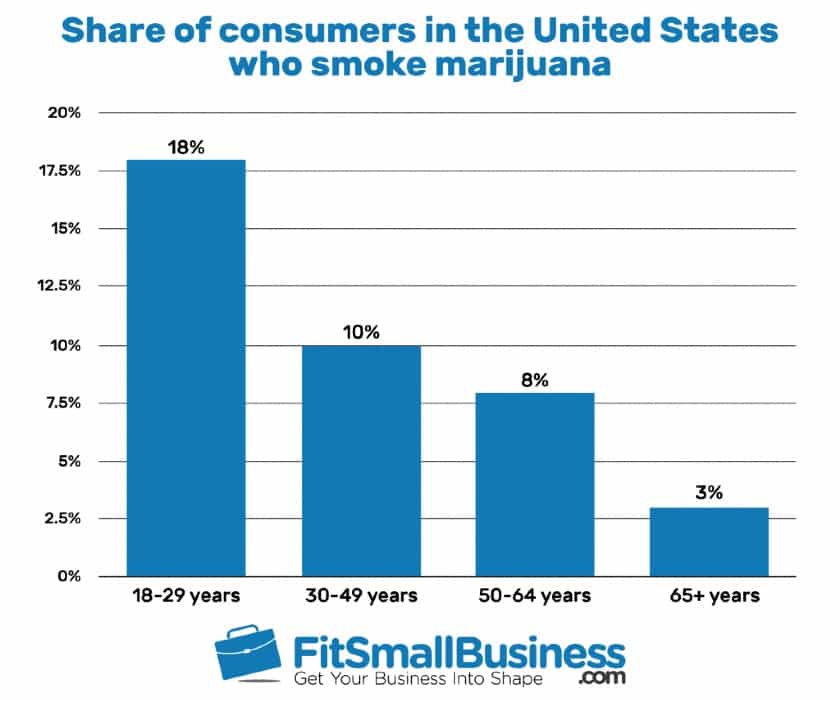 About 18% of American consumers aged 18 to 29 use marijuana.

Most people spend an average of $25 to $50 per trip at a marijuana retailer.

While men tend to stick to the plant and concentrates, women tend to be a little more explorative, purchasing tinctures, topicals, beverages, and other marijuana products.

West Coast states like Washington and California have the most expansive opportunities for cannabis dispensaries and retailers.

Due to the legality of marijuana and the booming market in these areas, this portion of the U.S. has great potential for small to medium dispensaries.

Of 327 million Americans, around 55 million of them ― around 17% ― use marijuana regularly. This is a considerable portion of the population that currently uses cannabis.

The cannabis market is expected to grow at a rate of 21% per year between now and 2021.

This will mean that in three years’ time, the marijuana industry will be pulling in about $23 billion per year in revenue.

The cannabis industry is already huge. However, as more states approve its medicinal and recreational use, the market is only expected to grow and continue to thrive. This is an ideal time for small to medium business owners to consider getting into the dispensary market as dispensaries don’t take long to become profitable and draw in a large profit. However, before getting started, be sure to do your research on the market at hand as well as any relevant regulations. This will be critical in understanding whether your dispensary will grow with the market or be weighed down with restrictions.