todDale Carnegie’s quotes on salesmanship, public speaking, and communication skills are a source of timeless inspiration for people, in business and personally. He was a well-known writer and lecturer who designed numerous courses on self-improvement and entrepreneurship. He also published numerous books full of wisdom that many people still read today.

Here are 40 Dale Carnegie quotes to inspire success in business and beyond.

While unemployed, nearly broke, and living at the YMCA on 125th Street in New York, Carnegie started to teach public speaking. When he ran out of material in his first session, he suggested that students speak about “something that made them angry.” It was then he realized that this was an effective technique to make speakers unafraid to address a public audience.

1. “If you want to conquer fear, don’t sit home and think about it. Go out and get busy.”

2. “You can conquer almost any fear if you will only make up your mind to do so. For remember, fear doesn’t exist anywhere except in the mind.”

3. “Most of us have far more courage than we ever dreamed we possessed.”

5. “The person who seeks all their applause from outside has their happiness in another’s keeping.”

6. “First, ask yourself: What is the worst that can happen? Then prepare to accept it. Then proceed to improve on the worst.”

7. “Instead of worrying about what people say of you, why not spend time trying to accomplish something they will admire?”

8. “Do the thing you fear to do and keep on doing it… that is the quickest and surest way ever yet discovered to conquer fear.”

9. “For better or worse, you must play your own instrument in the orchestra of life.” 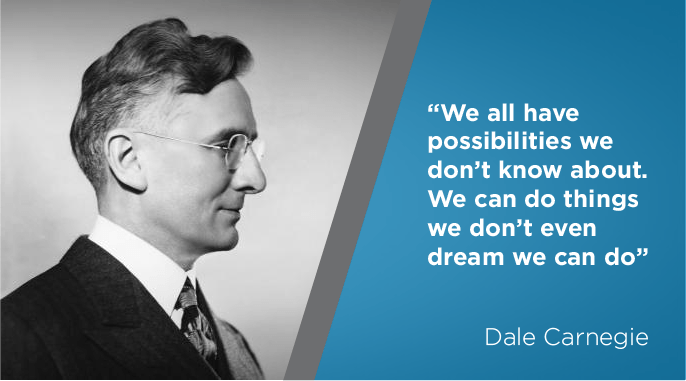 Carnegie wrote and published the book, “How to Win Friends and Influence People” in 1963. In it, he explored the fundamental techniques of handling people and how to make them like you. The book became a bestseller, widely used by salespeople to develop their skills in business communication.

10. “Talk to someone about themselves, and they’ll listen for hours.”

12. “Arouse in the other person an eager want. He who can do this has the whole world with him. He who cannot, walks a lonely way.”

14. “Names are the sweetest, most important sound in any language.”

15. “There is only one way … to get anybody to do anything, and that is by making the other person want to do it.”

17. “The royal road to a man’s heart is to talk to him about the things he treasures most.”

18. “Three-fourths of the people you will meet tomorrow are hungering and thirsting for sympathy. Give it to them, and they will love you.” 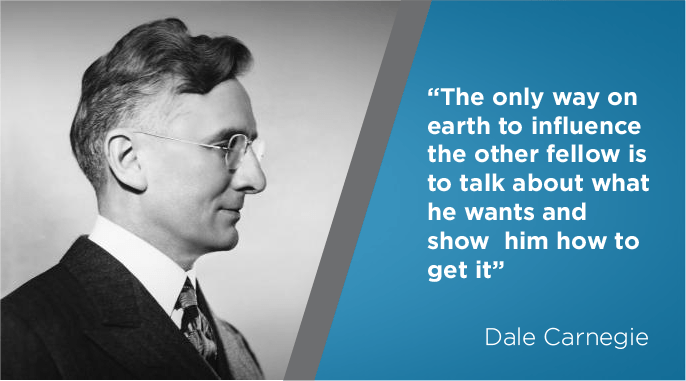 Although he never started his own business, Carnegie’s books gave inspiration to business leaders. His courses taught them the importance of a leader’s mindset and the role it plays in entrepreneurship. He emphasized the value of people skills and leadership traits that’s inherent in every successful business.

20. “Take a chance. All life is a chance. The man who goes farthest is generally the one who is willing to do and dare.”

21. “Do the hard jobs first. The easy jobs will take care of themselves.”

22. “The successful man will profit from his mistakes and try again in a different way.”

23. “Any fool can criticize, condemn, and complain, but it takes character and self-control to be understanding and forgiving.”

24. “Knowledge isn’t power until it is applied.”

25. “There are four ways, and only four ways, in which we have contact with the world. We are evaluated and classified by these four contacts: what we do, how we look, what we say, and how we say it.”

26. “Be sympathetic with the other person’s ideas and desires.”

As a boy, he had to wake up at dawn to take care of the animals and clean up the stable before going to school. Despite his hard life, Carnegie managed to complete his studies and attend college. He began writing his books on self-improvement for business and in 1912, founded Dale Carnegie Training.

29. “Only knowledge that is used sticks in your mind.”

30. “Develop success from failures. Discouragement and failure are two of the surest stepping stones to success.”

31. “Don’t be afraid to give your best to what seemingly are small jobs. Every time you conquer one, it makes you that much stronger. If you do the little jobs well, the big ones will tend to take care of themselves.”

32. “Remember, today is the tomorrow you worried about yesterday.”

33. “Feeling sorry for yourself, and your present condition is not only a waste of energy but the worst habit you could possibly have.”

34. “Happiness doesn’t depend on any external conditions. It is governed by our mental attitude.”

35. “If you believe in what you are doing, then let nothing hold you up in your work. Much of the best work of the world has been done against seeming impossibilities. The thing is to get the work done.”

36. “Most of the important things in the world have been accomplished by people who have kept on trying when there seemed to be no hope at all.”

37. “Our fatigue is often caused not by work, but by worry, frustration, and resentment.”

38. “Don’t be afraid of enemies who attack you. Be afraid of the friends who flatter you.”

40. “Remember, happiness doesn’t depend on who you are or what you have. It depends solely upon what you think.” 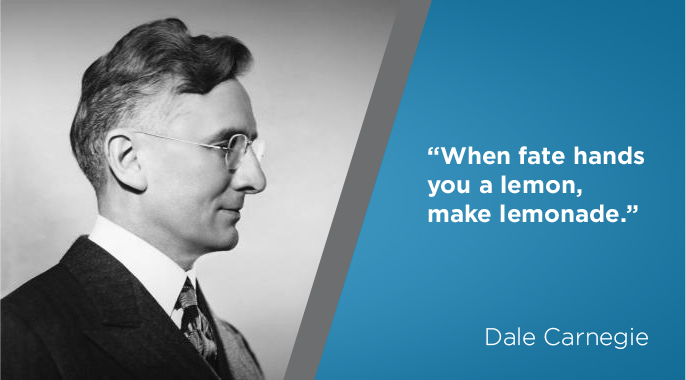 One lesson Carnegie shared in his books is that it is possible to change other people’s behavior by changing your own behavior toward them. Always remember that you must believe in your own potential if you want to achieve something in life. We hope these quotes by Dale Carnegie inspire you to reach for your goals, no matter how impossible they may seem.

What’s your favorite Carnegie quote? Share them with us in the comments.