Juvy has over 10 years of content writing experience and was a licensed teacher. She has evaluated and written about dozens of payroll and HR software solutions for small business to provide the best answers to your software questions.

JobScore is a cloud-based recruitment platform that includes a career page builder, auto-posting to job boards, social-media recruiting, employee referral support, and collaboration and compliance tools. Its free plan has basic applicant tracking features and allows posting one job at a time. JobScore’s paid plans start at $149 per month for five open jobs, but a monthly subscription of $449 is required to use its advanced features.

What We Recommend JobScore For

JobScore has efficient applicant tracking and recruiting tools. Its free plans can help companies reach an unlimited number of applicants through its one-click job posting to free and paid job boards and referral programs. Users can also review, sort, respond to candidates in bulk, and, in the more expensive paid plans, enjoy premium features.

In short, JobScore is best for:

When JobScore Would Not Be a Good Fit

Looking for something else? Explore our guide on the best recruitment software to help you find a good fit. We also have guides on hiring employees and advertising your job to attract the right candidate.

JobScore also offers Enterprise plans at custom rates. This plan includes everything in the Scale plan and unlimited job postings, plus other features such as a dedicated Slack channel, phone support, custom exports, a calendar, Google Analytics, and other recruiting tools integration.

JobScore has the tools you need to create a job listing, send it to job boards, and share to social networks. It also includes features to track job postings and applicants, which helps keep all hiring-related tasks in one place. Learn more about JobScore’s features and see if they’re right for you.

With JobScore, all plans include a career page builder with intuitive layout tools. JobScore lets you manage your career page directly from its platform. You can create attractive job descriptions with pictures or videos to showcase products or services, add company logos, and feature impressive profiles of team members to attract the best candidates for the position. 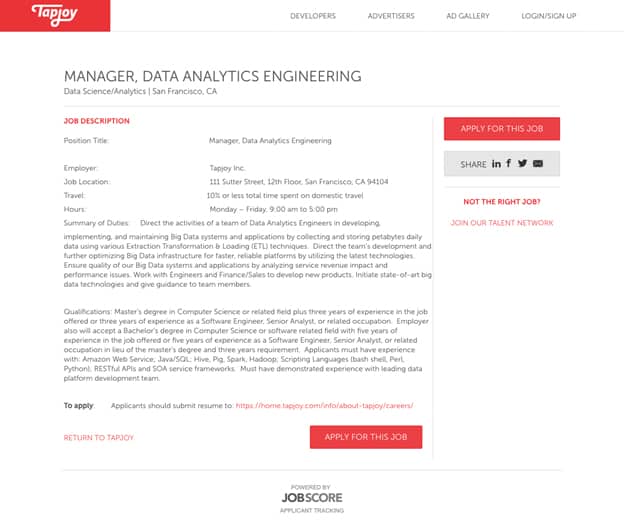 Adding a job listing is straightforward: Simply click “Add Job,” which takes you to a page where you add details about the job such as educational requirements and status (full time, part time, freelance). You may add text and relevant images.

With JobScore, you may choose if you want a resume and/or a cover letter and what information you need from the applicant. With the Scale and Enterprise plans, you can modify the application form as you see fit—create short forms to encourage readers to apply or make long forms to easily catch qualified talents. These application forms are stored in the account and are reusable by different departments of an organization.

Within the same page, you may add hiring team members, specify their roles, and customize when to get candidate alerts.

JobScore allows customization of the workflow stages, which determines how applicants move through the hiring process. You can add, remove, edit, or reorder stages to create a workflow that’s stored in your account and reusable on different jobs. However, some stages can’t be deleted or edited such as “new,” “recruiter screen,” and “declined.”

In the paid plans, you can customize the workflow stages for each job. For example, you may decide to skip an onsite interview after the phone screening for a specific job. 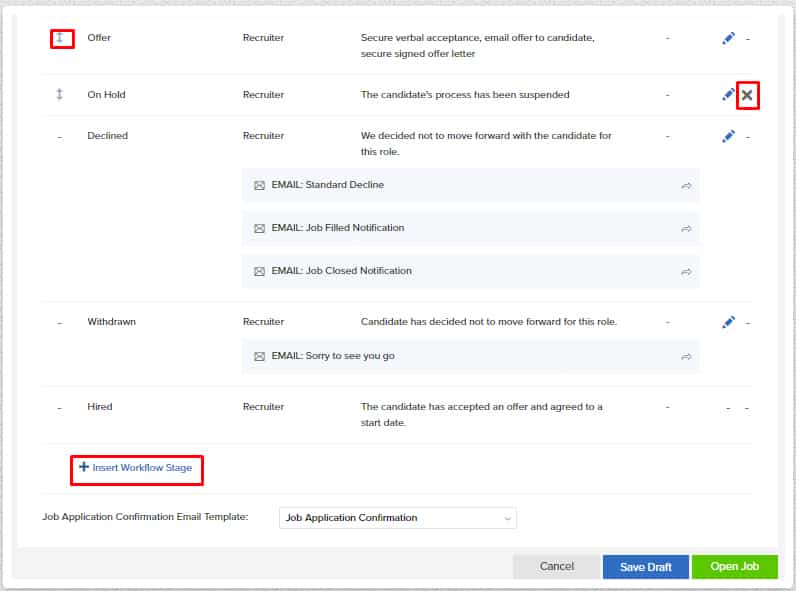 All plans include an auto-post feature where users can post jobs to free job boards. The published job postings stay on the boards until the position is closed or filled. If you don’t want to post a particular job, you can turn this feature off. JobScore’s Start, Scale, and Enterprise plans allow posting to paid job boards. Currently, JobScore supports about 80 job boards.

Learn about the best job posting sites to post your listings and attract the right candidates.

JobScore makes it possible to share job listings with friends. From its Jobs page, you can access your jobs listing and the Action Menu, which opens the option to share the job to your social and professional networks. You may share on Facebook, LinkedIn, Twitter, and email contacts. People who visit your careers site may also reshare your jobs.

JobScore lets you monitor job postings, making it easier to see how these postings perform. With this feature, you can see details like the number of views, clicks, and applications for each posting. You can also see who’s sharing your jobs and if these shares get views and applications. For me, I think this feature is handy in determining which sources provide results. However, this feature is only available for the Scale and Enterprise plans. 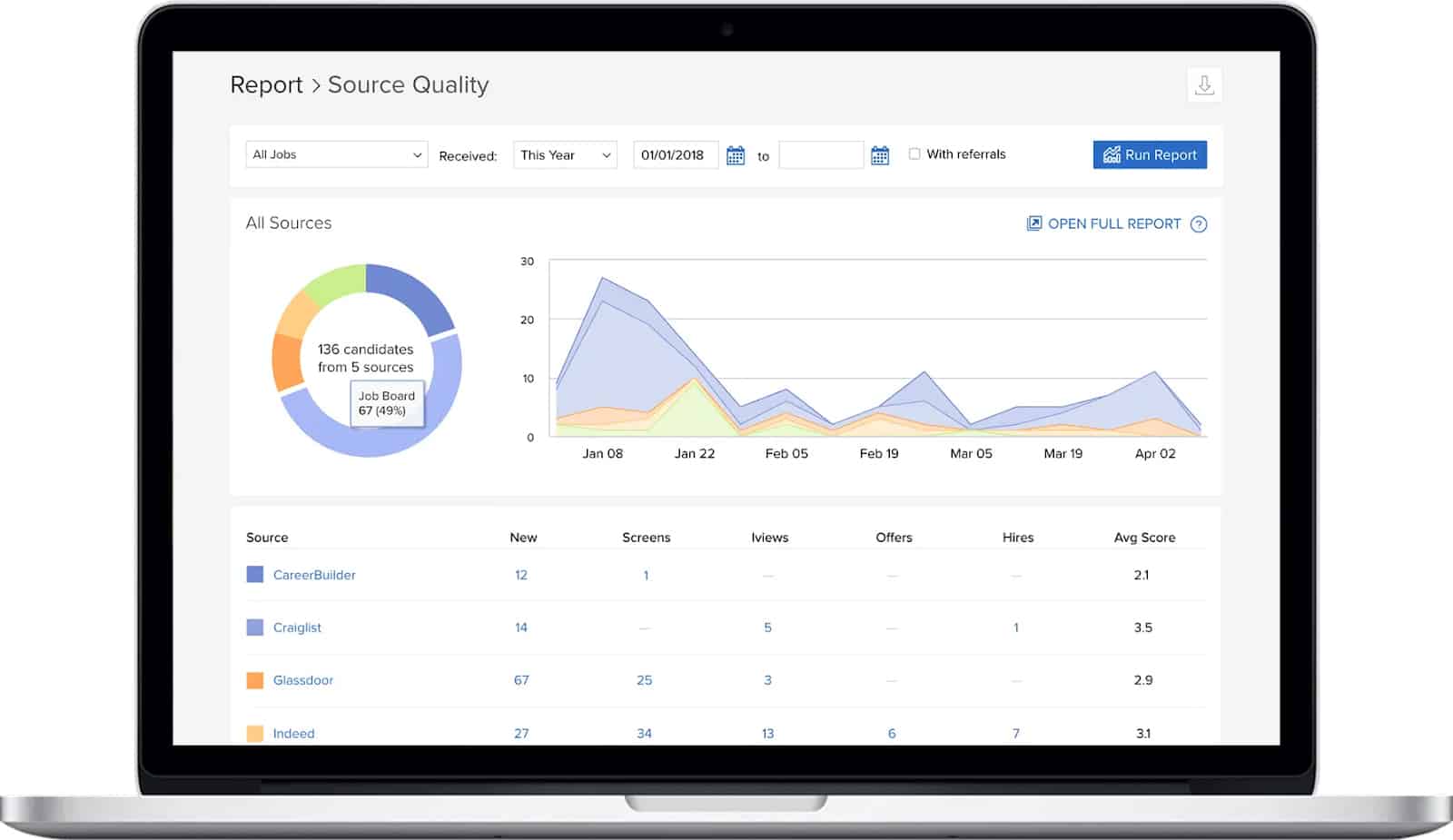 View the number of candidates from different sources and how many reach each stage of the workflow.
(Source: JobScore)

Review and Respond to Applicants in Bulk

JobScore’s Candidate Manager lets you review and respond to multiple applications at once. After an applicant submits the required details, JobScore extracts education, employment, and contact information from resumes, which can be sorted by job, candidate answer, or tag.

JobScore lets you score candidates based on your set criteria such as job titles, location, keywords, and educational degrees. You can add corresponding weights to generate scores for candidates. From here, you may sort candidates based on their scores so those with the highest will be at the top.

JobScore’s Scale and Enterprise plans let you set the maximum time for candidates to linger in your workflow stage, after which they are considered “overdue.” In this report, you’ll see the number of overdue candidates in each stage. Clicking on these numbers shows a detailed list of candidates, from which you can send an update or follow up on their application. 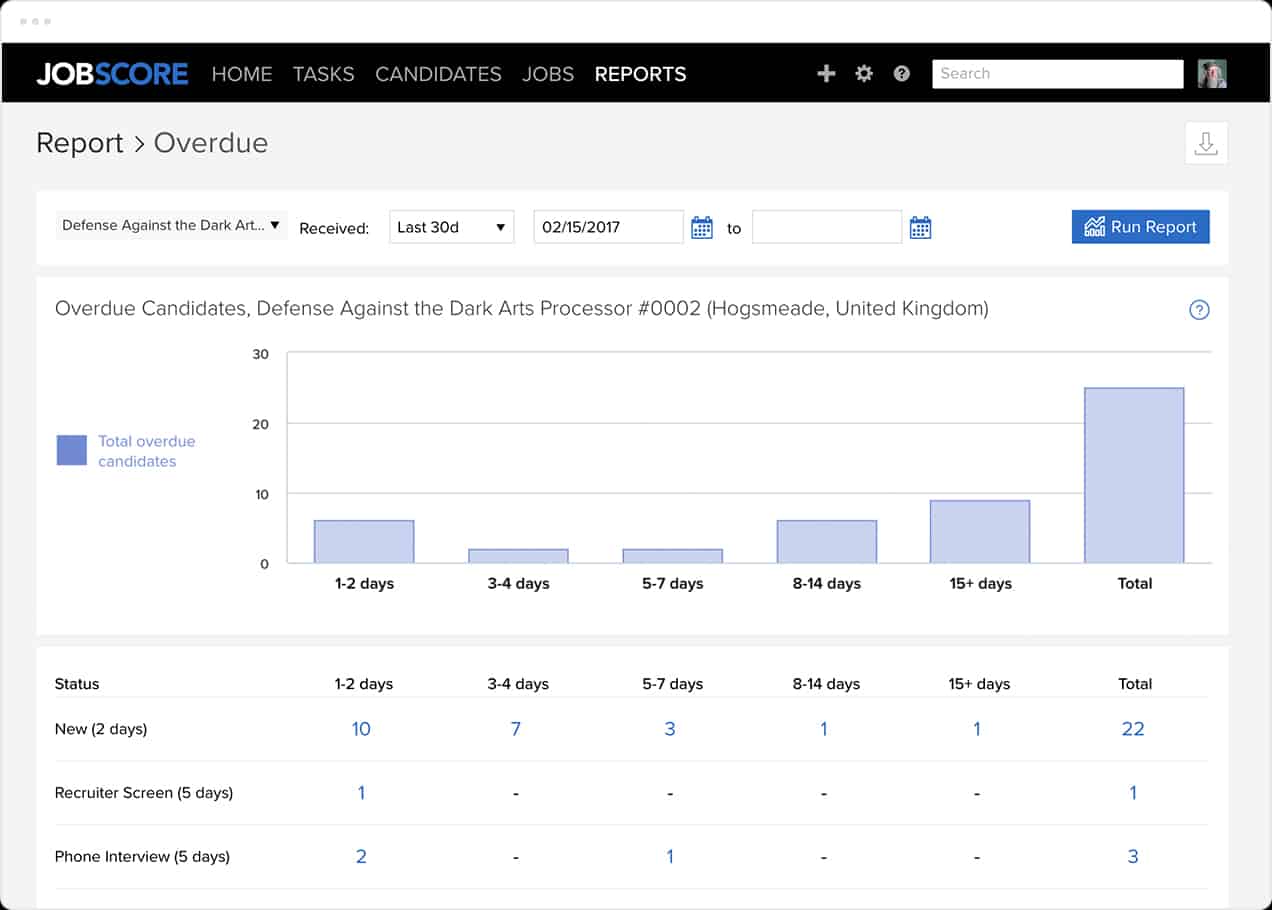 Overdue reports show how many candidates are stuck in each stage.
(Source: JobScore.)

JobScore allows your employees to participate in referral campaigns. Your team members can view their referrals from their portal and know where they are in the hiring process. JobScore also highlights referrals and notifies recruiters and hiring managers so they aren’t mixed with other candidates.

You can also reward successful referrals with prizes, cash, or charity donations. 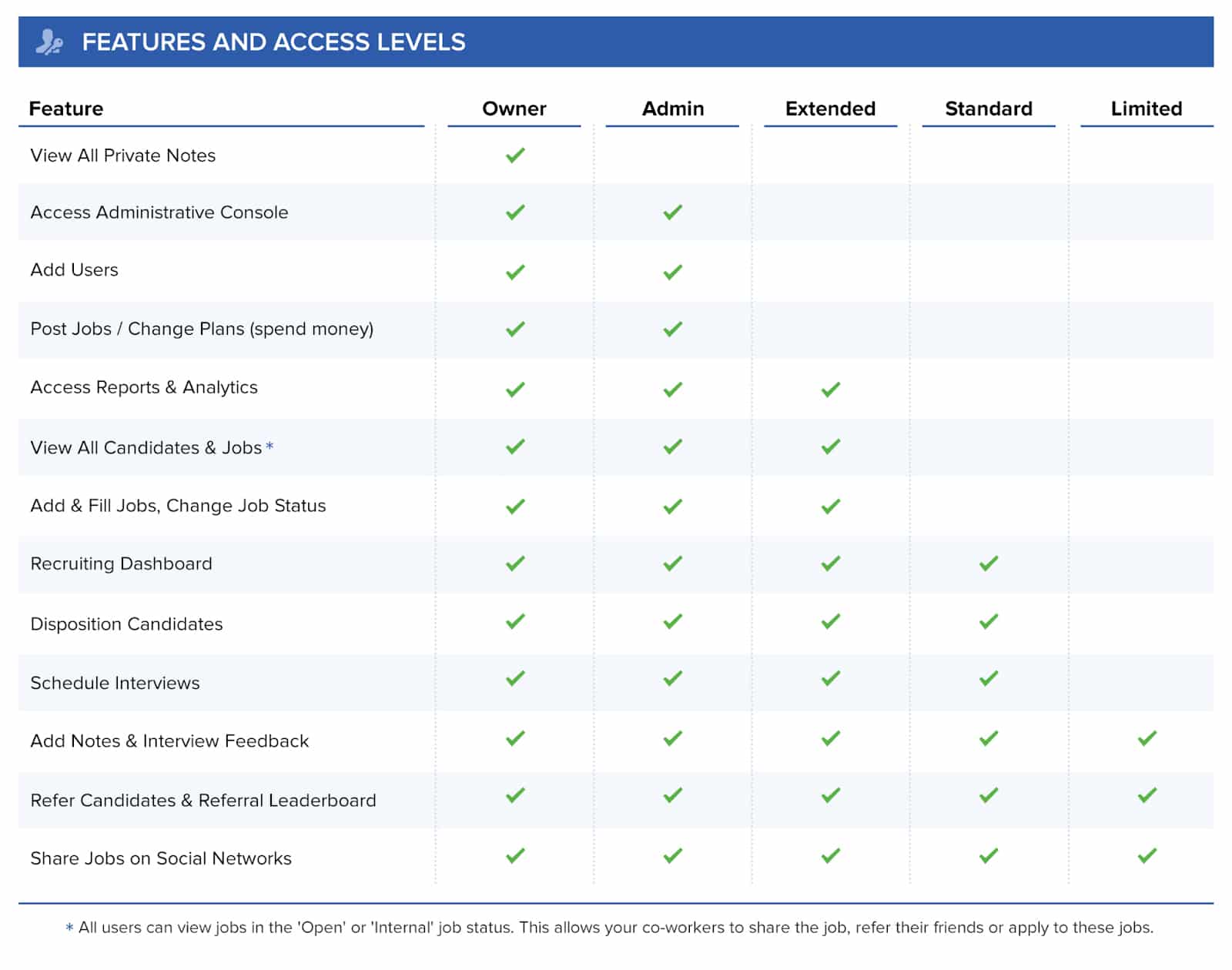 For the Scale and Enterprise plans, JobScore supports integration with other tools, including the following:

Equal Employment Opportunity (EEO) compliance is required for all businesses with more than 15 employees in the US. For all plans, JobScore shows applicants a disclaimer and provides them the choice to divulge their ethnicity, gender, veteran status, and disabled status. This optional information is hidden to avoid influencing hiring decisions.

For the Scale and Enterprise plans, contractors can create self-identification forms that match the correct layout and font mandated by the Office of Federal Contract Compliance Programs (OFCCP). Part of the OFCCP mandate is to record the reason for declining a candidate. JobScore provides “disposition codes” to track disqualification reasons and reduce risks of violation.

JobScore also supports creating a legal agreement, which applicants should go through as part of the application process.

JobScore Ease of Use

JobScore’s main dashboard looks clean and is easy to navigate. From here, you can access the features you need to configure your careers site and add, share, or post a job. You may also view your tasks, jobs, and reports easily. Despite its many features, the layout is organized, so you don’t feel overwhelmed.

Although you can see a chat box popup in the website, it asks for your email address where a representative can send their response. However, you can’t expect to receive a same-day response.

What Users Think About JobScore

Users who left JobScore reviews love its simple and intuitive interface. They also like JobScore’s customization features at an affordable price. However, some users are frustrated that some features can be expensive.

JobScore is a recruiting solution that’s easy to set up, use, and explore. Its free plan provides users with features needed to customize their career page and post one job at a time to job boards. It also allows users to manage their hiring team, respond to candidates, support and track referrals, and stay compliant with state employment laws and regulations.

To use JobScore’s premium customization, integration, and other features, you have to subscribe to its more expensive plans. If you’re unsure if you need these features, JobScore has a free 30-day trial.

Charlette Beasley is a payroll & HR expert at Fit Small Business. With more than a decade of accounting and finance experience, Charlette has worked side-by-side with HR and accounting leaders to establish and help implement payroll best practices, controls, and systems. Her experience ranges among small, mid-sized, and large businesses in industries like banking and marketing to manufacturing and nonprofit.

Small Business. She has more than 10 years of experience writing product reviews and providing online content for small businesses. Juvy was also a college instructor. She believes that her teaching background, writing experience, and supportive team members are crucial elements in providing the best answers to readers.