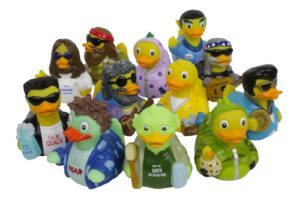 SAN RAFAEL, Calif., Nov. 23, 2010 /PRNewswire/ — CelebriDucks, the original creator of the first-ever celebrity rubber ducks of the greatest icons of film, music, athletics and history, is doing their part to remind us of the simple joys and pleasures in life. Thus they are releasing their new Canard line (ka-nard – French for duck) of Cupcake-, Coffee-, Wine-, and Chocolate-themed limited-edition rubber ducks just in time for the holidays. For all the foodies out there who also love rubber ducks, this is a match made in duck and food heaven! You can even send a “Canard Gram” to anyone worldwide of a personalized card, a rubber duck, and their handcrafted premium Belgian chocolate or hand-made all-natural soap. CelebriDucks president, Craig Wolfe, remarked, “Everyone loves food; everyone loves rubber ducks; put the two together and you’ve really got a gift that is sure to make anyone smile!”

The company is best known for their line of celebrity ducks including The Wizard of Oz, Elvis Presley,Barack Obama, Marilyn Monroe, the world’s first 100% recycled “green” duck, and KISS among hundreds of others. The company created a Tropical Parrot, complete with Hawaiian shirt and shades, for The Jimmy Buffet Margaritaville Cafes, and successfully sell their Blues Brothers ducks at all House of Blues venues nationwide. They also created the world’s first floating Pink Flamingo for The Flamingo Hotel inLas Vegas.

CelebriDucks has produced ducks for the NBA, Major League Baseball, the NHL, Collegiate Mascots, and NASCAR. The company has pioneered a whole new collectible and to date their ducks have appeared on numerous TV shows including The Tonight Show with Jay Leno, CBS Evening Magazine, and Late Night with Conan O’Brien. CelebriDucks were voted one of the top 100 gifts by Entertainment Weekly.

Their work can be viewed at http://www.CelebriDucks.com