“Shark Tank” is a business reality TV series on ABC. The show features entrepreneurs presenting their business ideas to a panel of celebrity investors—the “sharks”— who decide whether to offer to invest in the business. This article provides some famous “Shark Tank” advice and quotes to inspire entrepreneurs.

Here are 25 “Shark Tank” quotes from the “sharks” themselves on business and money.

2. “Now here’s the killer question: What is the cost of acquiring that customer?”
⁠—Kevin O’Leary, “Shark Tank,”Season 1, Episode 11

3. “A good entrepreneur never takes ‘no’ for an answer, but a smart businessman knows when to move on.”
⁠—Robert Herjavec, “Shark Tank,” Season 1, Episode 11

4. “You’re putting your heart, your soul, and your love into it, and you care about the business. It’s called sweat equity. Sweat equity has value.”
⁠—Mark Cuban, “Shark Tank,” Season 3, Episode 6

5. “You should never be afraid to examine your idea fully, even if it means you might have to give it up.”
⁠—Barbara Corcoran, “Shark Tank Jumpstart Your Business,” 2013

6. “One of the biggest rules to entrepreneurial success is knowing when an idea isn’t doing anything but draining your savings.”
⁠—O’Leary, Twitter, April 2017

8. “If I have to give one piece of advice to someone who’s thinking about starting a business, I tell them this: Forget about balance. You’re going to work 25 hours a day, seven days a week, forever. That’s what it takes to be successful.”
⁠—O’Leary, CNBC, November 2018

9. “When you try to please everybody, you end up pleasing nobody.”
⁠—Cuban, “Shark Tank,” Season 2, Episode 2

10. “Stay in the game no matter what (stuff) is hitting you against the head. I learned that if you hang around after your worst failures, there’s always a prize for you. A lot of people—and I’ve invested in a lot of entrepreneurs—make the mistake of thinking, ‘This is just terrible.’ But something good always comes if you’re just there to catch it.”
⁠—Corcoran, Interview with Inc.com, June 2017

11. “I have learned the value of nice. Nice is so undervalued. It makes doing business so much easier, and the result is so much better when you are just nice.”
⁠—Cuban, YourStory.com interview, June 2019

12. “A brilliant idea doesn’t guarantee a successful invention. The real magic comes from a brilliant idea combined with willpower, tenacity, and a willingness to make mistakes.”
⁠—Lori Greiner, “Invent It, Sell It, Bank It!: Make Your Million-Dollar Idea into a Reality,” 2014

13. “If you can adapt, you can figure out the game, and you can succeed. The world will not be won by the strong or the educated. It will be won by those who can adapt and evolve.”
⁠—Herjavec, CNBC, March 2019

14. “The reality is, there are a lot of great products and services that are undiscovered. Because it’s one thing to do something great. It is a whole other thing to be able to market and sell it.”
⁠—Cuban, CNBC, March 2019

15. “I was fearless, I knew I would make it work, and that’s the difference between successful entrepreneurs and people that don’t get somewhere—it’s that tenacity and drive.”
⁠—Greiner, Forbes, July 2012

16. “The idea that growth equals profitability is a misconception. If you can’t afford the financial or qualitative side of growth, it can just as easily put you out of business.”
⁠—Cuban, “Shark Tank Jumpstart Your Business,” 2013

17. “If I lost everything and had to start from scratch, I would find a problem everybody had, and I’d solve it.”
⁠—O’Leary, CNBC, July 2019

19. “Figure out what your time is worth. If you’re on a fixed income, you should not spend the money, but if you have the opportunity to create greater value with your time than what you are going to spend on something, take advantage of gaining back the time.”
⁠—Herjavec, CNBC, January 2018

20. “Sometimes, it’s not all about money. Sometimes, it’s about helping America and making the world a better place.”
⁠—Greiner, “Shark Tank,” Season 6, Episode 20

21. “You have to start saving in your 20s. You just have to because you want to end up in your 60s with a boatload of cash sitting in investments, so you can kick back and relax a little bit.”
⁠—O’Leary, CNBC, August 2019

22. “Cash is the lifeblood of your business. You can recover from almost any other mistake, but if you run out of cash, you’re dead.”
⁠—Herjavec, “Shark Tank Jumpstart Your Business,” 2013

Since “Shark Tank” debuted in 2009, it has helped aspiring entrepreneurs kickstart their businesses. In each episode, the “sharks” share advice and motivational insights to help new entrepreneurs understand the world of business. Check these famous “Shark Tank” quotes on business and money shared by these business moguls. 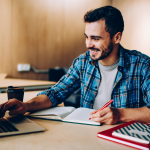 8 of the Best Blogging Courses & Conferences 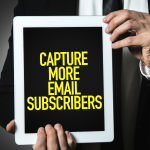