David Waring is the Co-Founder of Marc Waring Ventures LLC, the parent company of FitSmallBusiness.com.

There are a lot of false statistics floating around the web about the dismal survival rates of small businesses. In this article, we get to the bottom of these stats and uncover the truth about small business failure rates.

Here are some business failure rates that can be found online:

As you can see, there are lots of different statistics out there, some of which contradict each other. Many of these stats aren’t backed by studies or data. Even studies that are backed by data may not give us an accurate picture of small business failure rates.

Why All These Stats Are Wrong

In this article, we look at three statistical models of business failure rates and explain why they are inaccurate.

We chose to analyze business failure rates compiled by (1) the Bureau of Labor Statistics, (2) Harvard Business School, and (3) Economists at the Small Business Administration (SBA). We chose these three examples because they come from highly authoritative sources and expose the range of problems associated with predicting business failure rates.

Here is a snapshot of the problems with each study, followed by an in-depth explanation.

Let’s look at the three studies in detail.

The US Bureau of Labor Statistics publishes business survival rates every quarter in its Business Employment Dynamics (BED) report (it was last updated in April 2016). The BED tracks business openings, expansions, closures, and contractions for businesses in the United States that have employees.

The BED’s most recent report found that approximately 56 percent businesses survive after 5 years. Framed as a failure rate, that means that 44 percent fail within 5 years.

The BED measures business survival by tracking business openings and expansions, and it measures failure by tracking closures and contractions.

Openings, expansions, closures, and contractions are defined based on company-reported employment changes:

In a nutshell, a business is born on the day its first employee registers. A business dies when the establishment reports zero employees. Sole proprietorships (e.g. one-person businesses) are not included in the data.

Why The Bureau of Labor Statistics Data Is Wrong

The fundamental problem with the BED data is its methodology. Evaluating business success and failure based on employment numbers poses two main issues:

Similarly, small business owner may have closed her shop because she decided to retire. This exit would be tallied as a ‘closing’ under the BED data. Ultimately, the BED only provides data on employment changes and cannot identify whether a business was successful or not.

A team from Harvard Business School looked at a specific segment of businesses to calculate failure rates: venture capital (VC) backed startups. This study, published in 2012, calculates failure rates for 2,000 venture-backed startups that raised at least $1 million from 2004 to 2010. The results show that 75 percent of VC-backed firms never return cash to investors, and 30 percent of those businesses implode, liquidating assets where investors lose all of their money. Let’s do the math to calculate the business failure rate:

This study found that 22.5 percent of VC-backed startups fail after six years of operation if you define failure as a liquidation of all assets. This number is half as low as the BED stat. If, however, you consider a business a failure if it didn’t give an ROI to investors, then the failure rate is 75 percent.

A business that’s simply not profitable isn’t considered a failure under the Harvard study. While the company may not be generating profits now, it has every opportunity to turn the corner and achieve its goal. The company is only a failure if it doesn’t return any cash to investors or if it has to liquidate all assets.

A company acquired by a competitor or a larger company is also not regarded as a failure. While the company lost its assets, investors would have been fairly compensated. Even if the business was struggling and assets were bought below market value, investors would have recovered a portion of money invested. 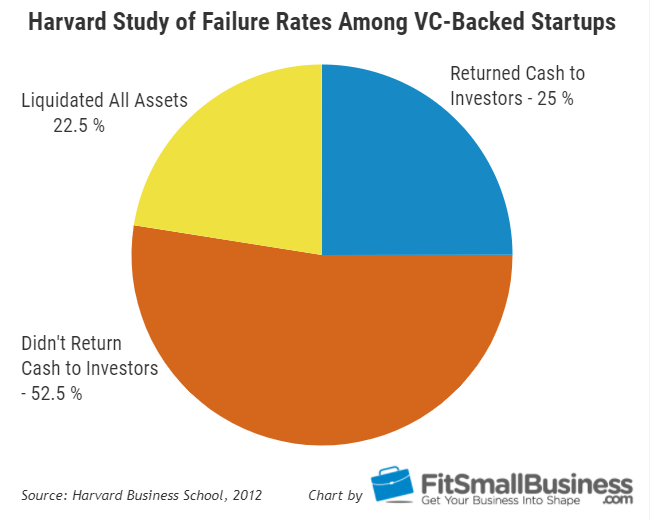 When looking only at venture capital-backed firms, failure rates vary based on how you define failure.

Why The Harvard Study Is Wrong

In 2003, Brian Headd, an economist at the US Small Business Administration (SBA), analyzed 12,185 businesses. He asked the owners of these businesses whether they considered their ventures a success or a failure.

He found that while half of the businesses exited the market after four years, the owners of one-third of those businesses still considered their firm to be successful.

Let’s do the math to calculate the business failure rate:

This study found that about one third of small businesses fail after 4 years. This lies in between the Harvard study findings and the BED data.

This study was based on business owners’ subjective perception of business success or failure. The study found that owners evaluated success differently based on their age, education, and past experiences. In addition, the type of business had an impact. Owners that wanted a stable, life-long business were more liberal in saying their businesses were successful than owners of a high-growth startup who wanted to sell off the business after a few years. 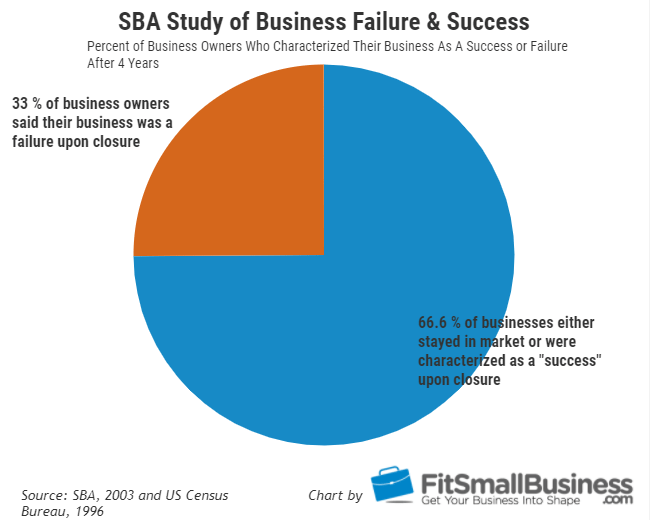 Why The SBA Study Is Wrong

Unlike the BED report, the SBA study does include sole proprietorships. Unlike the Harvard study, it also includes businesses in various industries and financed by various methods. So what’s the problem with this study?

Any study of business failure rates based on owner perception isn’t very helpful to people who are considering starting their own businesses. One owner may think her business was successful if she exits with $10K in profit. Another owner may only consider an exiting profit of $1 million as a success. Without a clear benchmark, you can’t compare the failure rate to your own business prospects.

In addition, we don’t know how the owners fared after they exited the business. Did they restart the business later? Did they pass the business down to family members? At the end of the day, not having an objective definition of business success and failure serves as a barrier in determining actual failure rates.

Next time you read a scary business failure statistic online, dig into the methodology and see what the study is actually measuring. Most likely, it doesn’t provide an accurate depiction of small business failure rates as we’ve discovered putting together this article. There are so many variables to consider, including how failure and success are defined, as well as sample size and representation.

What do you think about our findings on small business failure rates? Feel free to share your thoughts in the comments section below.

David Waring is the Co-Founder of Marc Waring Ventures LLC, the parent company of FitSmallBusiness.com. Prior to Co-Founding Marc Waring Ventures he held a variety of senior level positions at successful startups ranging from mobile technology to institutional trading systems.