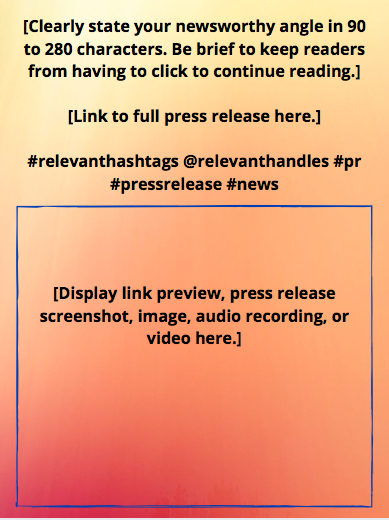 4 Elements Every Social Media Press Release Should Include

Here are five standard elements every social media press release should include:

Once you’ve decided on the length of your social media press release copy, it’s time to focus on the words you use to introduce your release. Consider starting your press release copy with an attention-grabbing phrase like “just announced,” “breaking news,” or “press release.” Next, share a very brief summary of your news that states why people should care or be interested in your news. You can increase engagement by ending your post with a question or prompt to engage like “tell us your thoughts” or “share your excitement with us.” 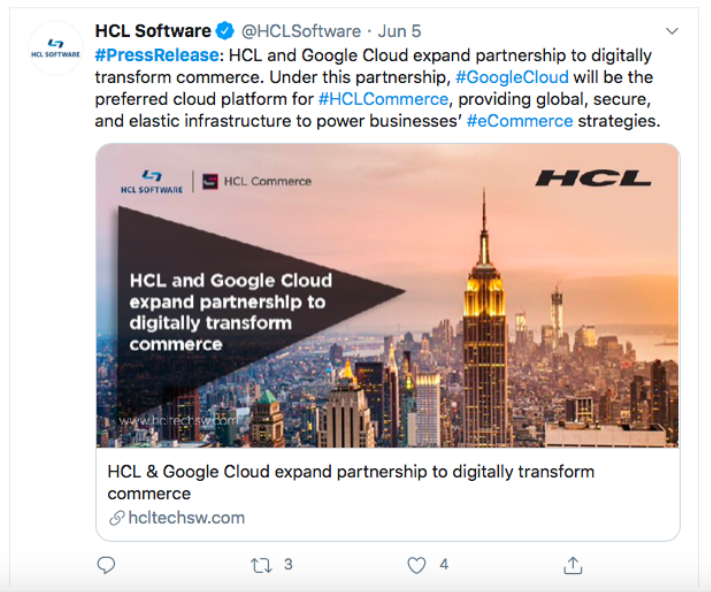 Doing this alerts these businesses that you are issuing the release so they may share about their involvement with their audiences, thereby exposing your release to more of your target audience. Include these relevant handles either within your copy (if you call out these businesses or influencers directly) or after your copy alongside your hashtags. 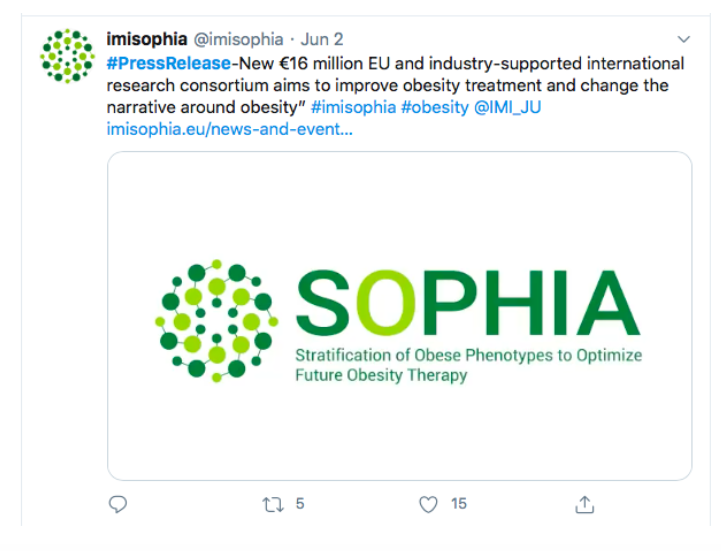 Sophia use of relevant handles to increase press release engagement

Hashtags are a means to encourage engagement and help your press release be found by media contacts who can amplify its reach. And they are very effective: Tweets that include hashtags enjoy 100% more engagement than those without, according to Hootsuite. They serve to help businesses get involved in relevant conversations, create discoverable content, and earn memorability and recognition with branded content.

Here are some types of hashtags to consider alongside your press release: 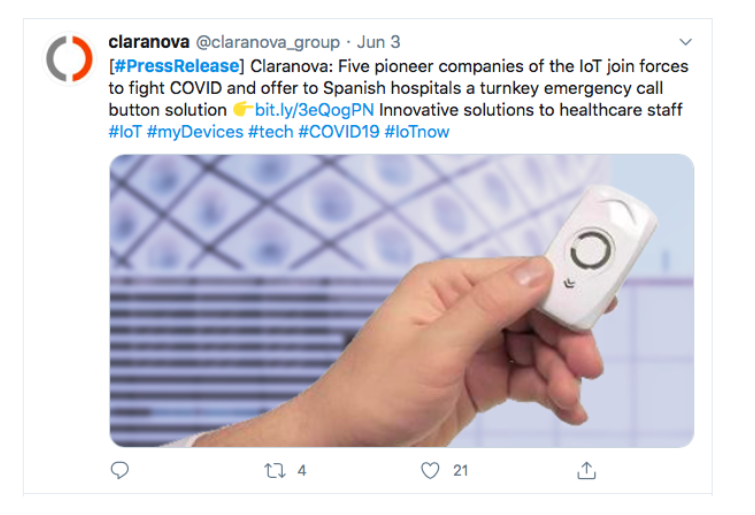 Claranova use of trending hashtags in social media press release

An easy way to create a custom image is to create your post using Canva. You can set up a free account, then search for the type of post you’d like to share. From there, design your post and share it. For example, use the search bar at the top of your Canva home page (once you’ve logged in) and search “Twitter Post.” Then, choose a template and upload your image. You can customize it by replacing the provided text with your own copy, add multiple images for a collage, or add an image and a key quote or details from your release. Finally, download the image and share it to your Twitter profile with other elements of your social media release. 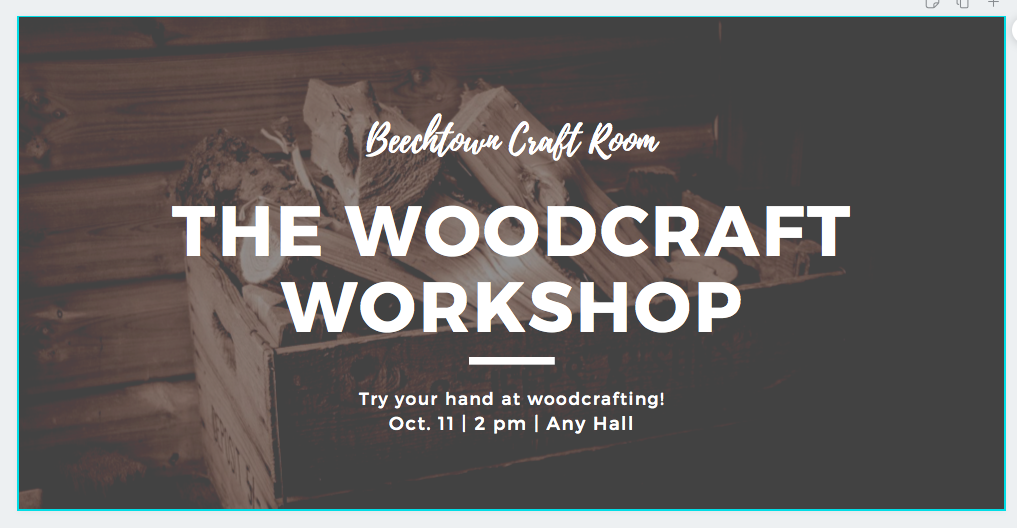 Pro tip: If you don’t know whether to post a link with an image or a video, many social media platforms offer insights into which your audience most responds to. Facebook, for example, offers Facebook Insights with a graph that specifically addresses the level of engagement for different types of posts as well as the engagement level each type earns your business.

5. Link to Your Press Release

After you’ve introduced your press release, share the link to your full press release. If you don’t yet have a full press release, read our ultimate guide on how to write a press release. Some platforms make sharing links easier than others. Facebook, for example, will let you share all the links you want in your post (though we recommend only sharing one), but Instagram can be trickier by not allowing you to share live links in posts.

For platforms that don’t allow you to share a live link, create a custom image and share your link on your image. Especially on an image, for greater engagement, shorten your link using a tool like Bitly; Bitly will convert your press release link into a shortened one of just a few characters, making it easier for people to type it into a mobile or desktop search bar.

For best results, consider using Campaign URL Builder to create a custom link that allows you to track your press release performance in Google Analytics. Setting one up is as easy as filling out a simple form (as shown below). We will talk about how to measure performance a little later in this article, but for now, simply set up the link if you want to track performance and share it in your social media press release. 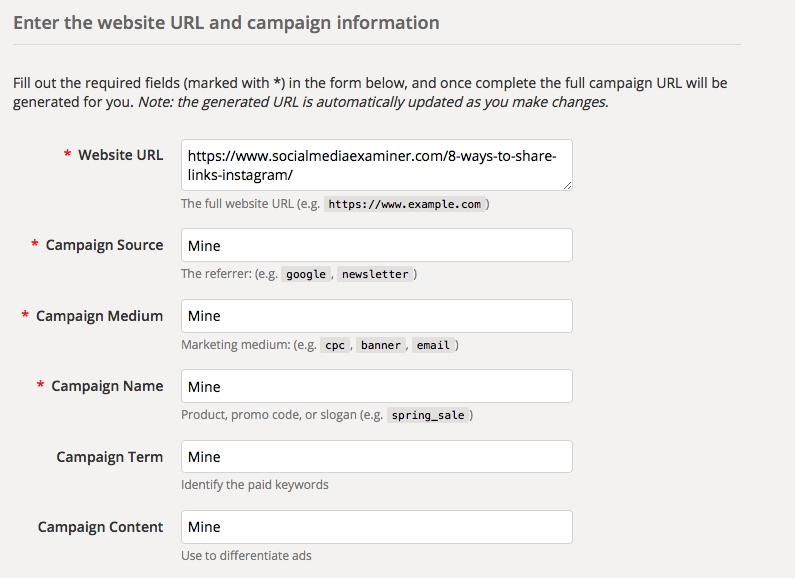 How to Distribute a Social Media Press Release

While we could tell you all the general rules for when most business audiences are most engaged, it is best to do your own research to understand exactly when your audience is most active (by posting, commenting, viewing, and reacting to your posts). If you have a business social media page, it is quite easy to find this information for free. While this process will vary depending on the platform, and most offer simple analytics reports to guide you.

For example, if you have a Facebook Business business page, Facebook Analytics is free and offers you graphs with information like when your fans are online and when they are most likely to engage with your post. Use this information to guide you in earning the most reach and engagement for your posts. 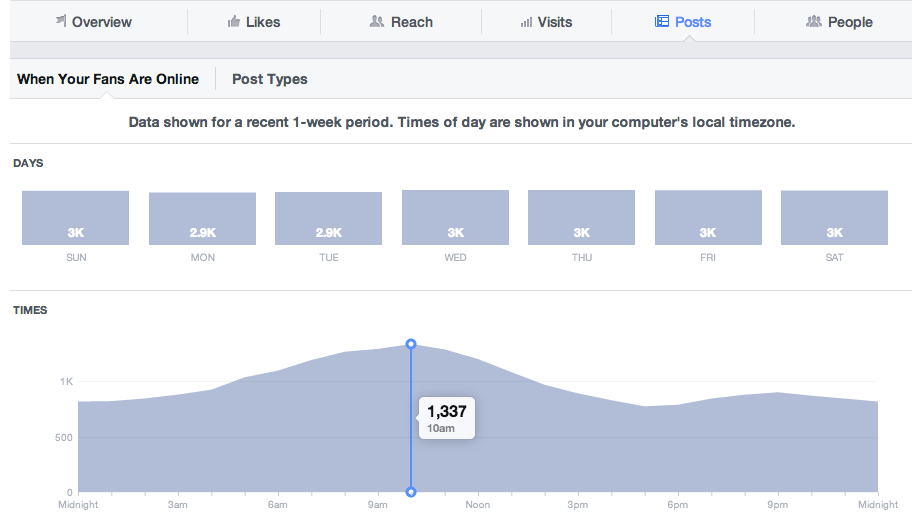 Facebook Analytics “When Your Fans Are Online” report (Source)

To learn more about how to market your business on Facebook, read our ultimate guide on Facebook for Business.

Social media platforms offer tools to help you promote your release before people who you may not normally interact with on the platform. For example, you can create a Facebook and Instagram ad. When you do, you can use targeting options to reach the audience you wish to consume your release, even if they are not current fans of your business. This could mean reaching people in specified locations, of certain demographics, or who share relevant interests. It could also mean targeting employees who work at specified news outlets.

To learn more about how to use social media to create a social media press release ad and on how to target the right audience or publication, read our article on free and affordable ways to distribute your release.

Tracking your social media press release performance helps you learn what worked and what didn’t in reaching your target audience, what you can do to further promote your release, and how you can apply learned insights to future press releases for best results. There are many tools you can use to track your social media press release performance on a small business budget, including social media analytics reports, social listening tools like Brand24, and Campaign URL Builder for tracking in-depth metrics in Google Analytics.

Most social media platforms have analytics reports you can access for free to track how your press release is performing. You will likely get more in-depth reports if you have advertised your post on the social media platform (for greater reach outside your contacts) rather than just posting it.

Once you’ve run your targeted ad, you can track key metrics like the number of people who viewed or clicked on your ad, how much you spent for that engagement, how your ad performs across different audience demographics (on Instagram versus Facebook), and across different devices.

I mentioned previously that using a trackable link builder like Campaign URL Builder can help you learn more about your press release performance and audience in Google Analytics. A URL builder allows you to insert information into the link you provide in your social media press release so you can differentiate traffic coming from it to your site. 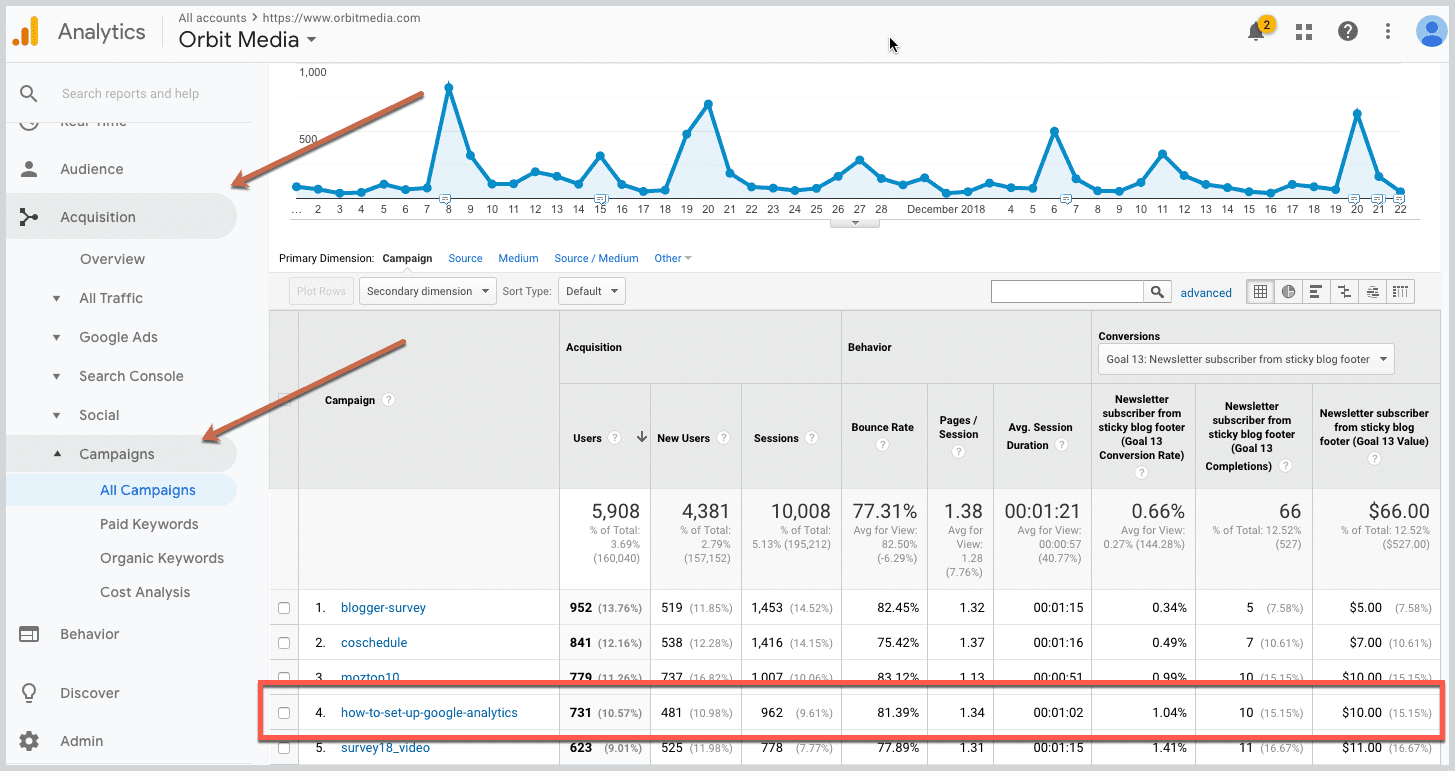 There are many social media mention tools. For example, for $49 per month, Brand24 tracks brand or product mentions across social media, news, blogs, videos, forums, and reviews. You can then track how much traction your release gets on other platforms as influencers and journalists cover your story before their audiences.

Trackable metrics include who mentioned keywords related to your story or brand, your social media reach, engagement earned by mentions, the reach of hashtags you used in your release, and the overall sentiment of mentions. For more information on how to set press release goals and what metrics are useful to track to help you meet them, read our guide on press release analytics.

Posting your press release on social media helps businesses affordably issue a targeted release that earns engagement. It includes copy to introduce a full press release, a link to the full release, and multimedia. This multimedia could be a snapshot of the full release, an image, a video, or an audio recording. To increase engagement, a social media release should also include hashtags labeling it a press release and connecting it to relevant conversations and handles of the businesses or influencers involved in the story.