This article is part of a larger series on Retail Management.

Vivint and SimpliSafe are top-rated security systems for small businesses, even though their main customers are homeowners. Both offer smart technology and mobile access to equipment, plus a useful range of cameras, locks, and sensors. Vivint offers professional installation and a wider range of sensors, while SimpliSafe is less expensive, easy to install yourself, and easy to use.

When to use an alternative: While Vivint and SimpliSafe are good for small businesses, they may not be the best solution. If you have large outdoor security needs, such as construction sites or garden shops, we recommend Tattletale. For complex security needs, ADT is your best choice, as it offers more options for cameras, tagging merchandise, and biometric keypads.

When to Choose Vivint

Vivint ranked high on our list of the best business security systems and received special callout for its ability to integrate with smart devices and other equipment. (Note: SimpliSafe also integrates with Alexa and Google Assistant.) Between Vivint and SimpliSafe, we recommend Vivint for established businesses that have security needs beyond a door alarm, fire and flood, and simple cameras. In addition to the equipment it has in common with SimpliSafe, it offers sensors for large doors, vehicle tracking devices, and a smart thermostat.

With the professional installation, you get a consultation on exactly what you need for the best security for your business. (Be careful, because customers say the salespeople can be pushy on the upsell.) The installation is generally done by professionals—it does involve drilling holes into your walls, so this is not a good choice if you have a picky landlord.

If you purchase the equipment outright, you have no obligations for the monthly monitoring, which starts at $19.99 per month. (Plan pricing depends on the number of cameras you have.) However, if you upgrade equipment, expect to get put on a contract. Unlike SimpliSafe, however, you can get financing for your system at 0% interest, but you’ll need to purchase monitoring while you are paying off the equipment.

Customers overall give it excellent reviews. The most common complaints are the sales practices and problems with customer support if something does not work right.

When to Choose SimpliSafe

If you are on a tight budget, are in a temporary location, or just need some basic security, then SimpliSafe is a great choice. Ranked No. 1 on our list of best business security systems, it’s super easy to install yourself, and the plans run from free (to use the equipment in the most basic way possible) to $24.99 per month (for full monitoring). That’s cheaper than most of Vivint’s plans and provides similar services.

SimpliSafe lacks the tilt and car sensors Vivint has, though, and also does not have special procedures for duress alerts such as if someone was holding you up. It does have panic buttons, which Vivint does not carry. The panic button sounds a siren and alerts the authorities quicker than calling 911. This makes it a good choice for gas stations and convenience stores where the button can be hidden but easily accessed.

SimpliSafe’s equipment is wireless and generally attaches with sticky tape, so it’s quick to install and easy to move with you. (If you move with Vivint, it will reinstall the system for a fee.) Plans can transfer to new locations as well. Some companies install SimpliSafe systems for you if you prefer.

There’s no point having a security system that can be hacked. In the past, both SimpliSafe and Vivint have been vulnerable. However, they have updated their equipment and protocols to protect against hacking.

Vivint: Of most concern are Vivint’s cameras. They now have 1024-bit encryption and the ability to hide IP addresses of connected devices. However, clever hackers have been able to hack into the camera feed. This may be done through your Wi-Fi network, so it’s important to keep that secure with regular firmware updates, firewalls, and strong passwords. Vivint also has two-factor authentication to make sure only approved users can access systems. The door and window sensors also have tamper alerts.

SimpliSafe: SimpliSafe launched its SS3 version in 2018, which has signal encryption for all messages between products and modes of wireless communication. It also has a jam detection algorithm that notifies you if someone is trying to jam your system, as well as a battery backup in case someone tries to get around the system by cutting power.

Why SimpliSafe Is Best for Price & Contract

The budget-minded small business will find the best deals with SimpliSafe. Not only is the equipment cheaper overall, but SimpliSafe offers a multitude of plans that run from free to $24.99 per month.

When to Use Vivint

Financially speaking, Vivint is the better choice if you need to finance your equipment, as it offers 0% interest. Keep in mind, however, that you are obligated to keep the service for as long as you are making payments on the equipment. Its monthly plans depend on the amount of equipment you have. The website says plans start at $19.99, though other pages say $29.99. You should assume its monthly plans will be higher than SimpliSafe, as are the equipment prices; plus, you need to call for a quote.

In April 2021, Vivint made a $20 million settlement on charges that its salespeople were using deceptive and illegal practices to secure loans for new customers who did not qualify by using unrelated people’s credit reports without permission.

Best for Installation: SimpliSafe for DIY, Vivint for Professional

With mostly wireless technology, SimpliSafe is designed to be easily installed. You don’t need tools or have to drill holes anywhere (except screws for the doorbell). Most items sit on shelves or have sticky tape. Begin by downloading the SimpliSafe app, which will guide you through setting up your system. It has guides online, but they are not videos like Vivint’s. Guides include everything from where to place items to how to program your preferences. People who reviewed it on Best Buy said it was incredibly easy to set up and took less than an hour.

While you can get professional installation for SimpliSafe, we did not find it on the ordering site, and online searches only revealed third-party installers. 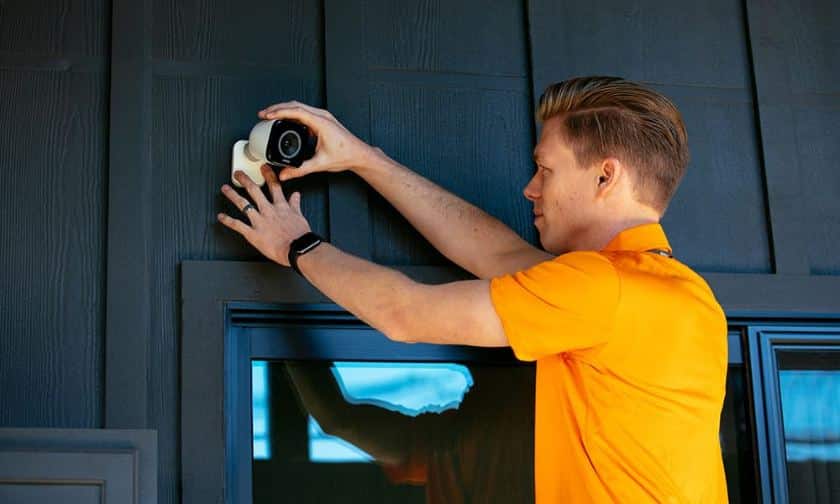 Vivint does provide instructions for DIY installation, but the default is to have its professionals do it. (Source: Vivint.com)

Vivint offers professional installation from $99 to $199, depending on the number of cameras you have. Its installers are licensed and trained and make sure all your smart products work together and your business has the best coverage in a way that is aesthetically pleasing without interfering. In addition, the installers provide training.

Installation starts with an in-business consultation to customize your system. On the day of installation, installers call ahead of time and follow COVID-19 protocols as needed. They go through the equipment with you, including any existing equipment you want added to your system, and determine the best placement. They install your Smart Hub first, and then the rest of your devices.

It is possible to DIY your security system, but Vivint does not recommend it. However, its support section has installation guides with video.

Takeaway: Vivint has a greater variety of devices and slightly better cameras. SimpliSafe is comparable and better for those on a budget.

Why Vivint Is Best for Cameras & Sensors 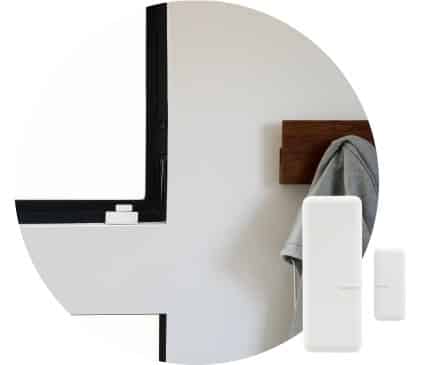 Vivint’s cameras have a wider view than SimpliSafe’s. The outdoor camera can also zoom up to 10 times for capturing details (SimpliSafe’s zooms 8 times). Like SimpliSafe, it has lights and an alarm, plus the ability for two-way communication. Nonetheless, they are not so superior that they should be the only reason to choose Vivint vs SimpliSafe.

Vivint surpasses SimpliSafe in sensors and detection devices, however. In addition to the usual break-in and environmental sensors, it offers a tilt sensor, which is useful if your business has a garage or warehouse section with garage doors. If you have company vehicles, the car guard sensor is handy. It plugs into the OBD II port of your car. From there, you can track your car on your Vivint app.

When to Use SimpliSafe 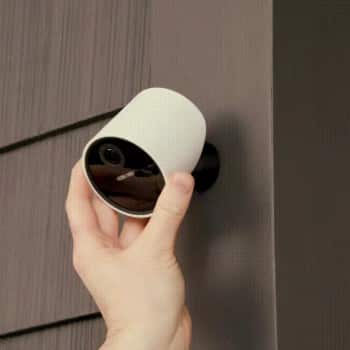 If your needs are basic and you don’t want to mess with installing wired devices, SimpliSafe offers excellent indoor and outdoor cameras with features similar to Vivint’s. It also has a wide range of sensors that work for most small business needs, like water sensors for the bathroom and smoke detectors. Most of its devices are less expensive and easier to install.

Why Vivint Is Best for Professional Monitoring 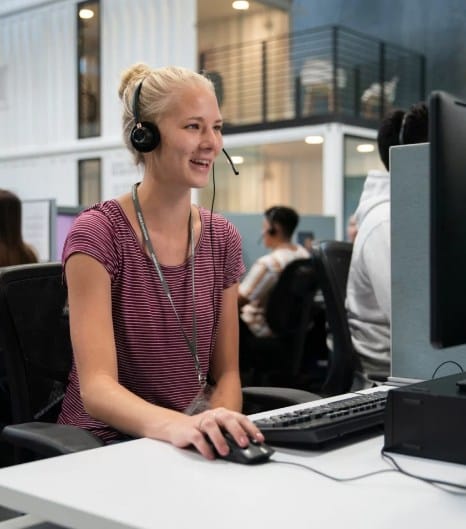 Vivint has protocols for five different emergency situations, which determine when and how you are contacted and when authorities are contacted. (Source: Vivint.com)

Like SimpliSafe, Vivint has a DIY monitoring option, but only if you buy your equipment outright; it’s most often used with professional monitoring. Alerts are based on five categories—Burglary, Panic, Medical, Fire, and Duress—and each have their own protocols.

In general, a monitoring representative will try to contact you first so that you can confirm the emergency. They try through the control panel, then the primary contact (and secondary for burglary). If no answer is reached or the emergency is confirmed, appropriate emergency personnel are dispatched, and you will receive a notification by text.

The Duress alarm, something SimpliSafe does not have, works differently. The monitoring representative instead listens quietly for 30 seconds. If they hear nothing, they hang up and dispatch local police or guard to check. If they hear suspicious activity, they have another rep contact the authorities while they continue to listen. This is an excellent security feature for when someone invades your business while you or employees are there.

When to Use SimpliSafe 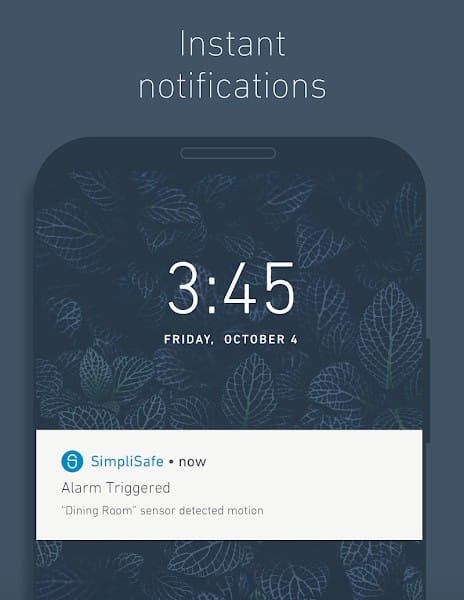 SimpliSafe provides notifications by phone or text, depending on preferences or the situation. (Source: Google Play)

One standout we found in SimpliSafe that Vivint did not offer was a silent notification for situations like safes or cabinets being opened. Secret Alerts send you a notice but do not trip a system alarm. This is a good option if you have off-limits areas or equipment that should not be touched. SimpliSafe also has a panic button, which can be placed under the counter and used to send an alarm in an armed robbery situation.

Best for Ease of Use: SimpliSafe

Takeaway: SimpliSafe is easiest to use, but if you don’t want to manage the system yourself, Vivint offers installation and repair.

Why SimpliSafe Is Easiest to Use

SimpliSafe is the easiest of the two to use. You can manage everything yourself, and the support section is searchable and has detailed how-to guides. Customer service is available seven days a week. Customers overall praised the ease of use of SimpliSafe. They had no trouble installing, moving, or adding to the system. However, in 2021, the number of complaints about customer support skyrocketed, with customers saying reps were rude and did not know the system.

When to Use Vivint

If you want the security of having a professional check your system, then Vivint is the best choice, although after the first 120 days, it will charge a service fee. Service calls themselves are guaranteed for 60 days, however, so they will come back for free if the first trip did not fix the problem. In 2021, customers generally had high praise for installation and use. Complaints were around billing and getting repairs when something did go wrong.

Whether you are starting your business or looking for ways to better manage it, security systems should be an important consideration. Both Vivint and SimpliSafe offer basic security tools for small businesses, with excellent cameras and a wide variety of sensors. Vivint is better for more complex security needs, while SimpliSafe is an excellent and economical DIY choice.