Walter Elias Disney was an American businessman, voice actor, producer, and cartoonist, known for many things, including creating Disney World and the beloved cartoon character Mickey Mouse. Before achieving success, Disney faced a multitude of obstacles most people couldn’t imagine, but through it all, he endured to create a legacy.

Here are 30 Walt Disney quotes that are both motivational and helpful in business:

1. “Sometimes I think of myself as a little bee. I go from one area of the studio to another and gather pollen and sort of stimulate everybody. I guess that’s the job I do. ”
– “Walt Disney Conversations, Part 52,” Edited by Kathy Merlock Jackson

2. “Whenever I go on a ride, I’m always thinking of what’s wrong with the thing and how it can be improved.”

3. “In order to crack the field, I said, I’ve got to get something a little unique.”
– “Remembering the Alice Comedies, How to Be Like Walt: Capturing the Disney Magic Every Day of Your Life,” By Pat Williams, James Denney

4. “The first Mickey Mouse was made silent, and while we were making the first Mickey Mouse, sound came. We immediately switched to sound, and we didn’t have any sound equipment or anything else, but we went ahead and made ’em for sound and we eventually got sound on ’em. And of course it, I think, played the big part in establishing Mickey Mouse.”
– Interview with Tony Thomas, 1959

5. “Two of the leading figures in the space field, Wernher von Braun and Willy Ley, helped us with the engi­neering of this [Space Mountain] ride. But the biggest help was the father who, 20 years ago, longed to sit with his children and enjoy not just a thrill ride but also a genuine sense of wonder.
– Interview with Ira Wolfert, “Readers Digest,” 1966 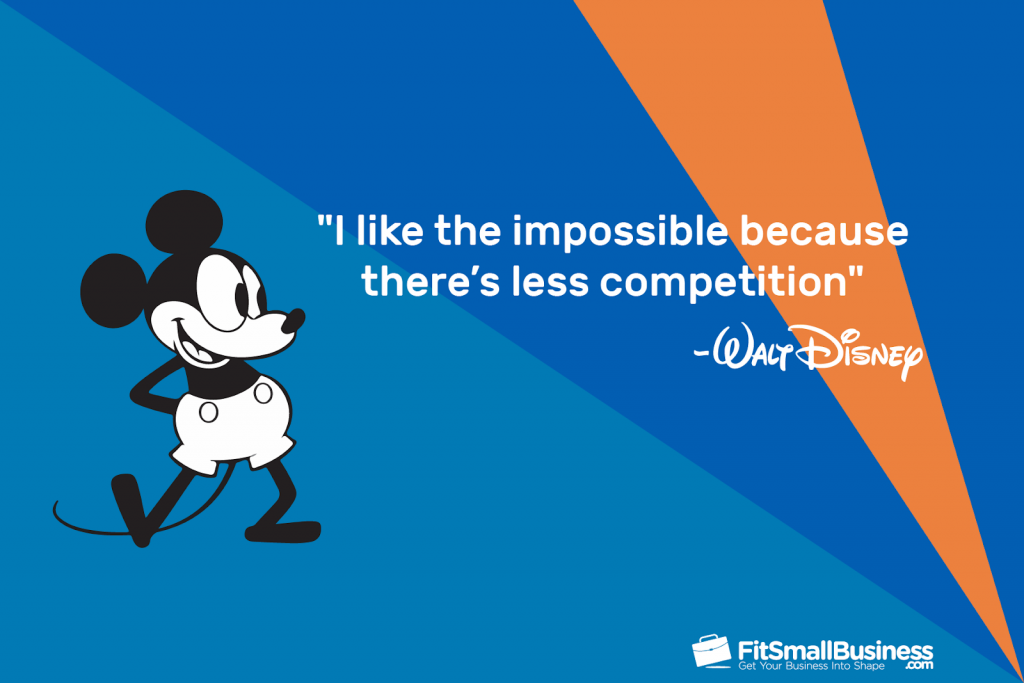 6. “The way to get started is to quit talking and begin doing.”

7. “Times and conditions change so rapidly that we must keep our aim constantly focused on the future.”

9. “Happiness is a state of mind. it’s just according to the way you look at things.”

10. “Ideas come from curiosity. When you’re curious, you find lots of interesting things to do. And one thing it takes to accomplish something is courage.”

11. “Dreams, ideas, and plans not only are an escape, they give me purpose, a reason to hang on.”

12. “Somehow, I can’t believe there are any heights that can’t be scaled by a man who knows the secret of making dreams come true. This special secret, it seems to me, can be summarized in four Cs. They are Curiosity, Confidence, Courage, and Constancy, and the greatest of these is Confidence. When you believe a thing, believe it all the way, implicitly and unquestionably.”

13. “If you can dream it, you can do it. Always remember that this whole thing was started by a mouse.” 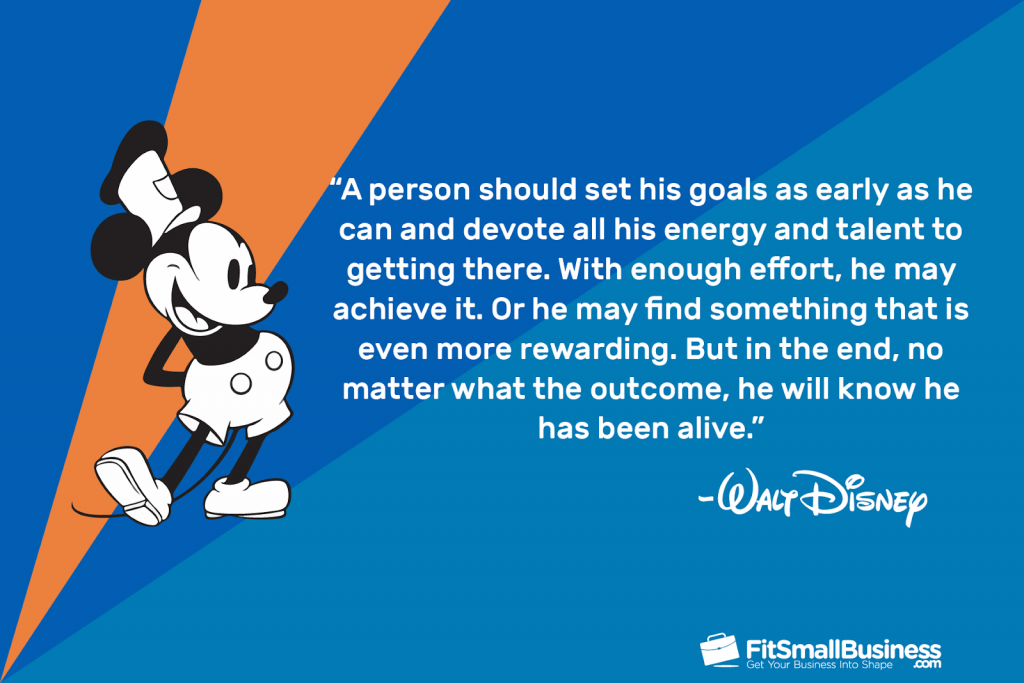 15. “A 50 year masterplan will change how you look at the opportunities in the present.”
– “How to Be Like Walt: Capturing the Disney Magic Every Day of Your Life,” By Pat Williams, James Denney

16. “I am not influenced by the techniques or fashions of any other motion picture company.”

17. “Of all the things I’ve done, the most vital is coordinating those who work with me and aiming their efforts at a certain goal.”

18. “We’re just getting started, so if any of you start to rest on their laurels, just forget it.”
– ”Walt Disney’s Railroad Story,” By Michael Broggie

19. “When we consider a project, we really study it–not just the surface idea, but everything about it. And when we go into that new project, we believe in it all the way. We have confidence in our ability to do it right. And we work hard to do the best possible job.”

20. We did it [Disneyland], in the knowledge that most of the people I talked to thought it would be a financial disaster–closed and forgotten within the first year.”

22. “You are at your most vulnerable only when people speak of your greatness.”

23. “I learned that it does not matter if you are a light … if you are not going to illuminate another’s road.” 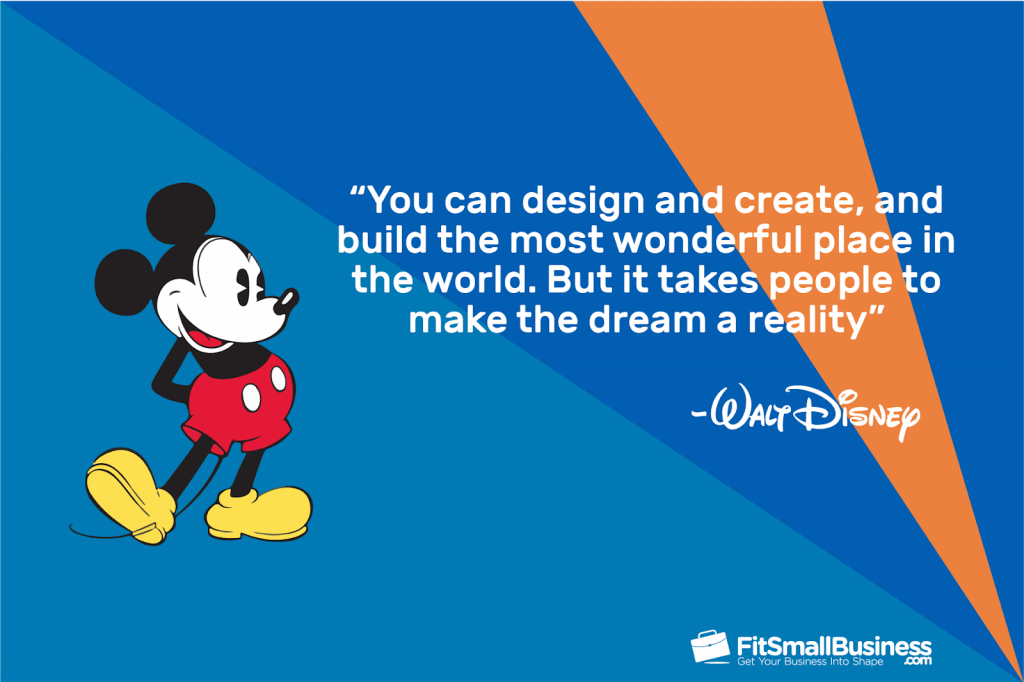 24. “Around here, however, we don’t look backward for very long. We keep moving forward, opening new doors, and doing new things, because we’re curious and curiosity keeps leading us down new paths.”

25. “The more you are in a state of gratitude, the more you will attract things to be grateful for.”

26. “There is great comfort and inspiration in the feeling of close human relationships and its bearing on our mutual fortunes–a powerful force, to overcome the “tough breaks” which are certain to come to most of us from time to time.”

27. “It is good to have a failure while you’re young because it teaches you so much, and once you’ve lived through the worst, you’re never quite as vulnerable afterward.”

28. “I always like to look on the optimistic side of life, but I am realistic enough to know that life is a complex matter.”

29. “Why worry? If you’ve done the very best you can, worrying won’t make it any better.”

30. “That day I lost the fear of losing and I started to fear not winning, I discovered that I was not the best and maybe never have been. I stopped caring about who was the winner and who was the loser. Now I care only about knowing more than yesterday.” 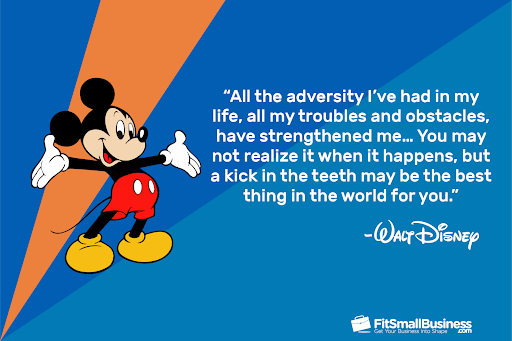 Walt Disney is known for much more than having built the world’s largest and most famous entertainment complex. He’s credited for bringing numerous theme parks, movie studios, and animated cartoon characters to life. His words and actions have inspired many to turn their dreams into reality. We hope these quotes by Walt Disney himself can guide you on your own journey to success.

Want to add more to our list of Walt Disney quotes? Share them with us in the comments.