Kimberlee has over 20 years of experience as a financial consultant and insurance agency owner. Her expertise is featured across Fit Small Business life insurance and business insurance content.

The United States Bureau of Labor Statistics (BLS) says private industry employers pay 45 cents per hour worked for workers’ compensation or approximately 1.3% of employers’ total compensation costs. However, every state runs its program differently, and that causes variations in workers’ compensation costs by state. Rates can be as low as 7 cents per $100 of payroll or exceed $80 per $100 of payroll depending on a business’ industry, location, and claims history.

The map above shows the most recent data compiled by the National Academy of Social Insurance (NASI). Its report lists Washington, D.C., as having the lowest average workers’ compensation rates at 51 cents per $100 of payroll, same as in the 2019 report. Alaska is still listed as the most expensive state at $2.25 per $100 of payroll, down 2 cents from the previous year.

Notes: Although not a states, Washington, D.C., has the lowest rates in the country at 51 cents. Average premiums are listed as cost per $100 of payroll.

Biggest Increases and Decreases in Workers’ Compensation Costs By State

Several states saw workers’ comp rates fluctuate between 2019 and 2020, with Wyoming seeing the biggest difference with a 72 cent decrease. The state with the biggest rate hike was Kentucky, where rates increased from 91 cents to $1 per $100 of payroll. Rate increases may reflect an increase in overall risk or a greater number of catastrophic claims while decreases are often reflections of better work safety protocol and fewer claims.

States With the Biggest Increases

States With the Biggest Decreases

There are many reasons for the different workers’ compensation rates by state. Probably the most significant factor is that each state governs workers’ compensation insurance differently. For instance, some cover nearly every employee, such as Wisconsin, while others exclude large numbers of workers from coverage. One state―Texas―only requires employers to carry workers’ comp when they have government contracts.

Each state also regulates how much an injured worker receives in benefits. Alaska covers 80% of a workers’ wages if they suffer an injury that temporarily leaves them disabled. Most other states cap wage replacement at 66.67%. How long the benefits last impacts costs too. Massachusetts, for example, stops permanent disability payments after 156 weeks. In contrast, Wisconsin covers certain permanent disabilities for up to 400 weeks and others for a percentage of 1,000 weeks based on a doctor’s estimate of the disability.

A state’s top industries can also affect the overall workers’ compensation costs, especially when the industries have several high-risk jobs. Every type of job is assigned a class code based on the risk of injury by either the National Council of Compensation Insurers (NCCI) or the state’s workers’ compensation rating board. Each class code is then given a base rate. Riskier jobs tend to have a higher base rate than less hazardous jobs.

Compare Washington, D.C.’s top industry, the federal government, to Alaska’s top industry, oil and gas. While not all oil and gas workers have risky jobs, a number of them do, and that increases the likelihood that insurers will have to cover injuries. This often results in higher premiums across a state.

How Workers’ Compensation Rates Are Calculated 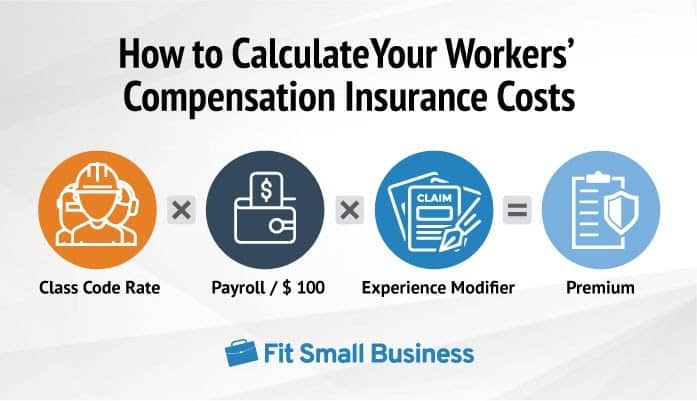 Your experience modification rate (EMR) is a number, created by the NCCI or state worker’s compensation ratings bureaus, that represents your claims history. Depending on your state, this number is multiplied by either your business’ or your individual employees’ class codes to determine your workers’ compensation costs. Improving your EMR is just one way to lower your workers’ compensation premiums. Other tips include hiring the right people, getting quotes from multiple carriers, and asking for discounts.

Key data that illustrates these trends are:

It is important that employers pay attention to the growth in wages as it pertains to overall increases with expenses like workers’ compensation.

The bottom line when shopping for workers’ compensation insurance rates by state or among multiple states is to understand that there are many factors affecting cost. Every state, company, and small business plays a role in defining the final rate. No two companies will have the same premium costs.

Kimberlee Leonard specializes in finance and business insurance and has over 20 years of experience between being a financial consultant, insurance agency owner, and owner of a content marketing agency. Kimberlee’s expertise has been featured in articles from a wide range of print and digital publications like The Latest, and The Houston Chronicle.

Get a Free Business Insurance Quote
No obligation or credit card required
Visit The Hartford!