The workplace isn’t what it used to be. Globalization, politics, technology, and cultural changes are changing not only what workers do, but where they do it, and how they want to be compensated for it.

Savvy employers who want to retain their top talent should adopt policies and redesign their workplaces to embrace these trends.

1. Not Offering Flexible Work is Now a Competitive Disadvantage

According to a 2016 Gallup survey, 51% of employees said they would change jobs for one that allowed them to work more flexible hours, while 37% would change jobs if they could work from where they want at least part of the time. Job seekers are demanding a flexible work environment, and if you don’t offer that in 2018, you will lose talent to your competitors who are.

It’s more possible than ever to offer flexible hours and remote work options. Thanks to video conferencing, CRM software, project management tools, group chat tools, and smartphones, you don’t have to watch people work to know they are producing.

Below is a chart using data from Gallup showing the 20 year trend of telecommuting, with the only downturn being during the 2008 recession. The New York Times, also referencing Gallup data, reported that 43% of working Americans worked offsite at least some time last year. We could reach a milestone in 2018 where half the American workforce is remote, at least some of the time.

Even jobs that were traditionally thought of as in-office jobs are now more flexible. According to Global Workplace Analytics, “50% of the US workforce holds a job that is compatible with at least partial telework.” The Wall Street Journal published census data showing that the largest jumps in remote work are in the health care and construction industries. For example, 71 percent of doctors and health providers now diagnose and even treat health conditions over the phone or video, so they don’t need to be in the office. Acknowledging that client relationships are central to the success of construction businesses, many construction workers no longer have a ‘home base’ office and travel between different construction sites. 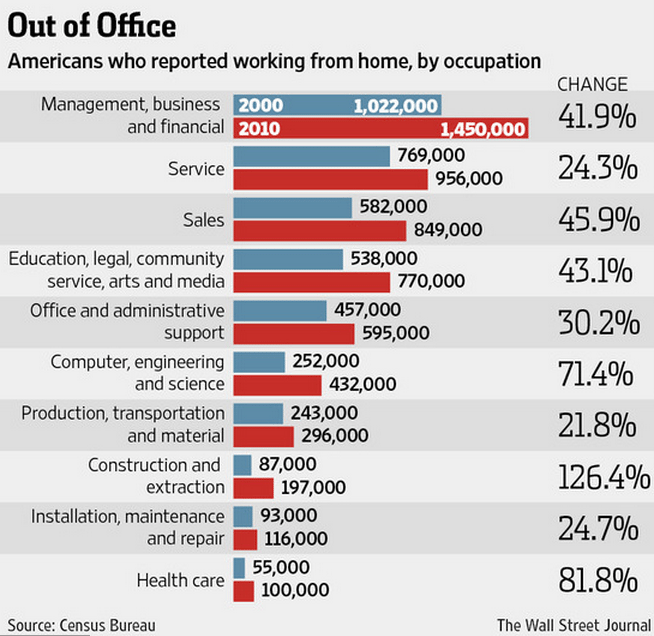 Work from home has seen growth across industries, but particularly in construction, healthcare, and tech.
Source: Wall Street Journal

2. Hybrid Live-Work Spaces Are on the Rise

While more and more employees are working away from the office, some employers are trying to keep folks in the office by blurring the lines between office and living space.

Urban-based companies like WeLive and WeWork are combining work and living space to make it easier for employees to have work life balance with flexible shared office space adjacent to residential units.  WeWork just announced a $20 billion valuation, bringing its value to more than Twitter, Box, and Blue Apron combined! Some companies with co-living and co-working spaces like Common receive as many as 500 -700 applications per month for an apartment.

We’re likely to see more co-living and co-working spaces in the future because they cater to millennials, who want to save money (by closely melding their living and working spaces) but also maximize flexibility and convenience in their living situations.

Co-living and co-working spaces are also having an impact on commercial real estate (CRE) development:

“Startups based on the sharing or collaborative economy, like Airbnb or WeWork, are disrupting the way organizations lease and use CRE. Companies face challenges from new competitors that are providing dynamically configurable spaces and flexible leases. Owners need to rethink their approach toward space design, lease administration, and lease duration.”

Mixed rentals have increased by about 25% over the past 7 years and appear to be a good option for employees who want more work life balance, because if they can’t work from their home, at least they have a short commute to the office upstairs in the same building. 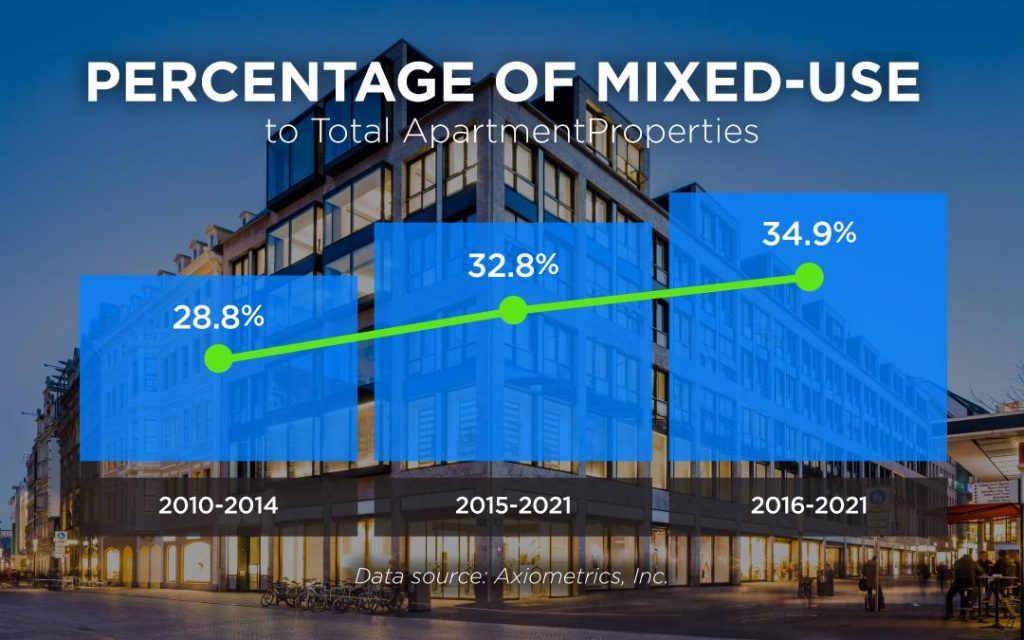 Here are a couple examples of communal living-working spaces: 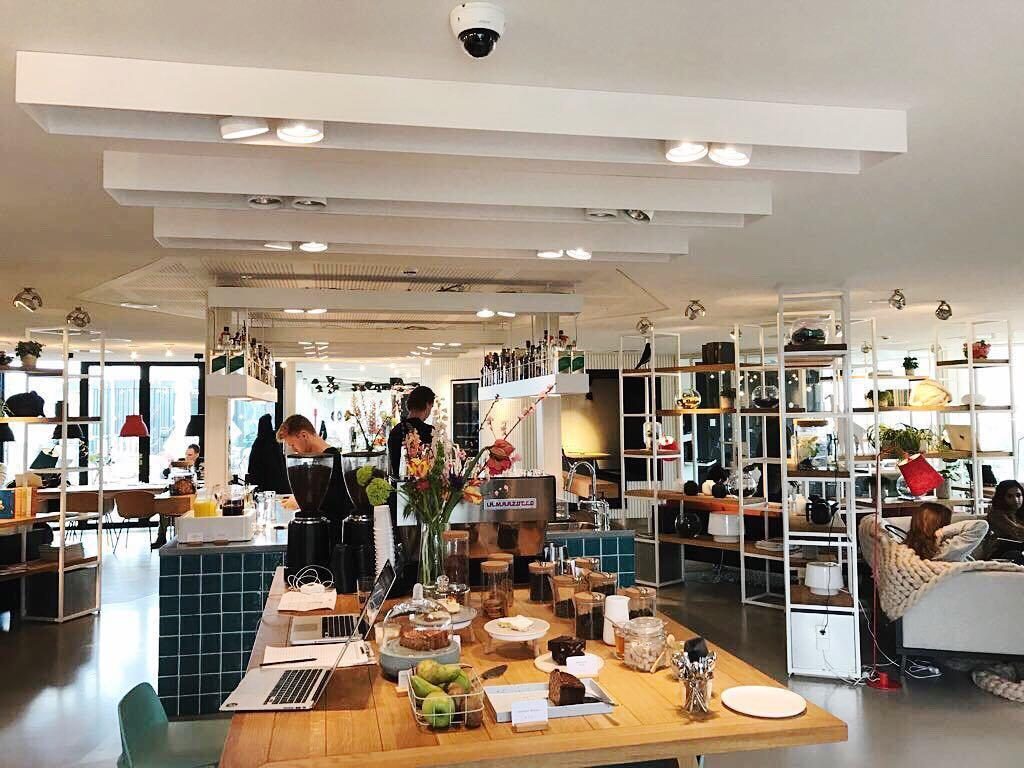 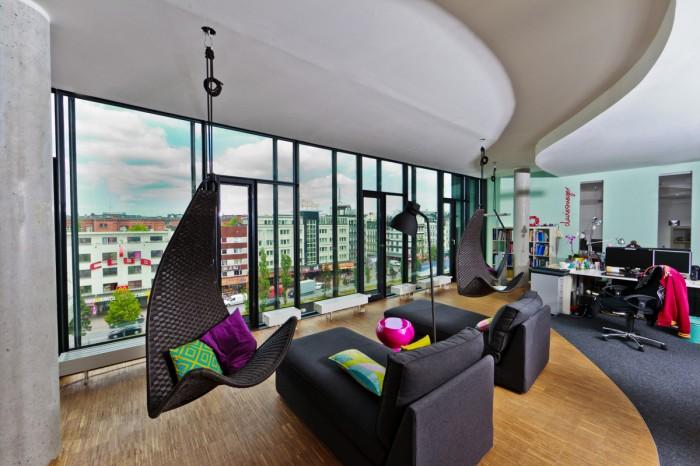 Live-work space with swings for employees to relax in
Source: Heureka

As unemployment rates drop in the US and competition for workers increases, employees are demanding more human-centered perks. Snacks and coffee are nice and perhaps even expected in 2018, but it’s the pricier benefits that employees are asking for now that can set businesses apart from competitors.

Large companies are already offering many of these benefits. For example Starbucks pays tuition for employees to attend Arizona State University (ASU) at $6 to $12K a year, and Etsy pays up to 6 months of paid parental leave to mothers and fathers, including adoptive parents, which for a $60K/year employee could cost $30K. Goldman Sachs even offers to pay for gender-reassignment surgery which can cost up to $50K, according to CostHelper. HR/payroll software vendors are even adding features to allow businesses to loan money to their employees.

According to Gallup, “The benefits and perks that employees truly care about are those that offer them greater flexibility, autonomy and the ability to lead a better life.”

The political environment may explain why certain benefits, such as parental leave and student loan assistance, have come to the forefront. Both of these topics were hotly debated during the last presidential election.

And according to Student Debt Relief, loan forgiveness programs may also be changing this year. So businesses wanting to retain the best talent in 2018, may need to pony up for some bigger human-centered perks.

In the 70s and 80s, high school and college grads often accepted entry level jobs like answering phones or sweeping up after clients in a salon, just to get their foot in the door. But those jobs are now being done by AI apps and robots, like website chatbots that can answer basic questions and route your query to the right person and robots that do basic chores like vacuuming.

Credence Research predicts the trend will continue by looking at how the Chatbot market might grow over the next several years. 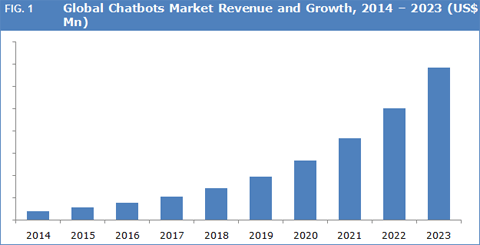 Chatbots, as only one example of AI technology in the workplace, are replacing entry-level worker jobs like phone receptionists, marketing assistants, and level 1 help desk staff.  Just take a look at the increase in shipments of consumer and office robots. 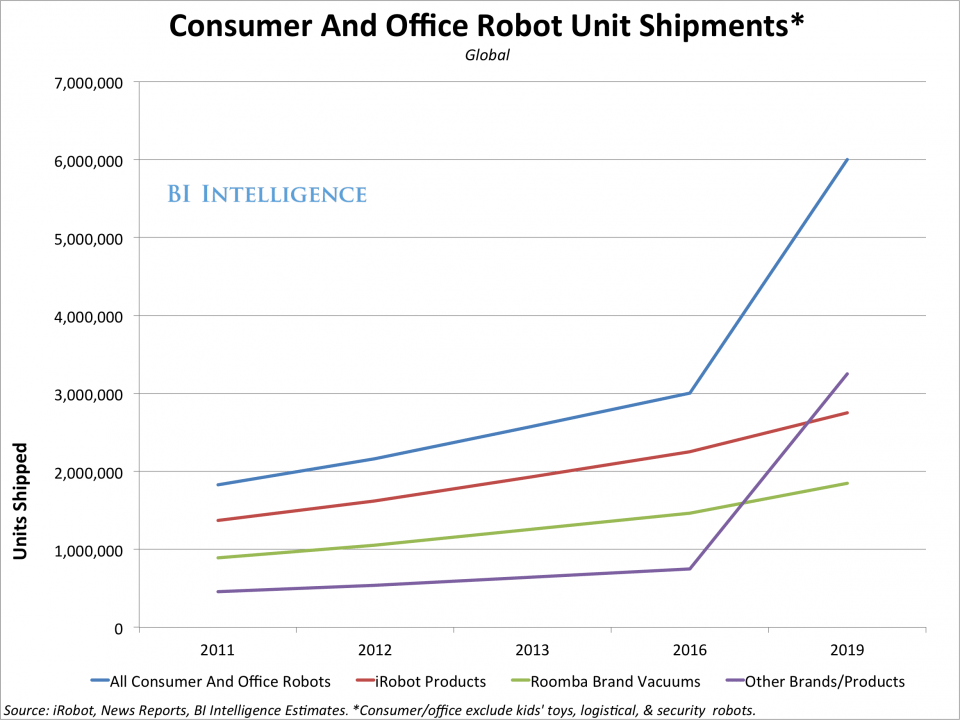 More consumer and office robots are being purchased and shipped
Source: IRobot

Business Insider shows in the chart below those jobs most likely to be replaced by AI. The increase in robots and AI in the workforce doesn’t necessarily mean that more people will be unemployed. It means that people’s roles will shift to jobs that require more cognitive, managerial, or planning skills that can’t be performed by today’s robotic technologies. For example, Amazon workers who used to do repetitive tasks, such as stacking boxes, are now managing robots that lift the boxes.

Jobs likely to be replaced, at least in part, by automation
Source: Business Insider

All these changes mean that millenials and other entry level workers are going to have to look elsewhere and adapt their skill sets to get their foot in the door.

PEOs are leading the way in providing co-employment. Employees are legally employed by the PEO, but their work is directed by the business client. PEOs can pool their employee population and offer big-company benefits like health insurance to employees of even the smallest employers, while taking away the day-to-day human resource and payroll administrative work, and ensuring business compliance with federal, state and local laws.

You can see the trendline on this chart below showing that temporary and PEO jobs are going up up up. In fact PEOs like TriNet and Justworks, probably don’t even know what most of their ‘employees’ do on a daily basis, because although the PEO is the employer of record, it’s their customers, the business owners, who direct workers’ daily activities. 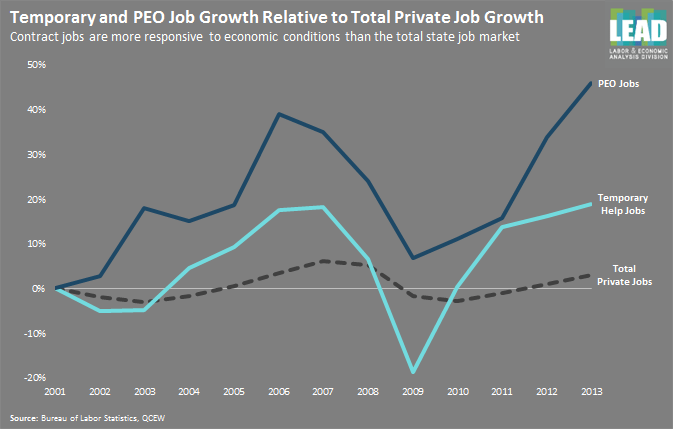 Expert360 states that over 40% of all US workers are now contingent and fall into the categories shown below. 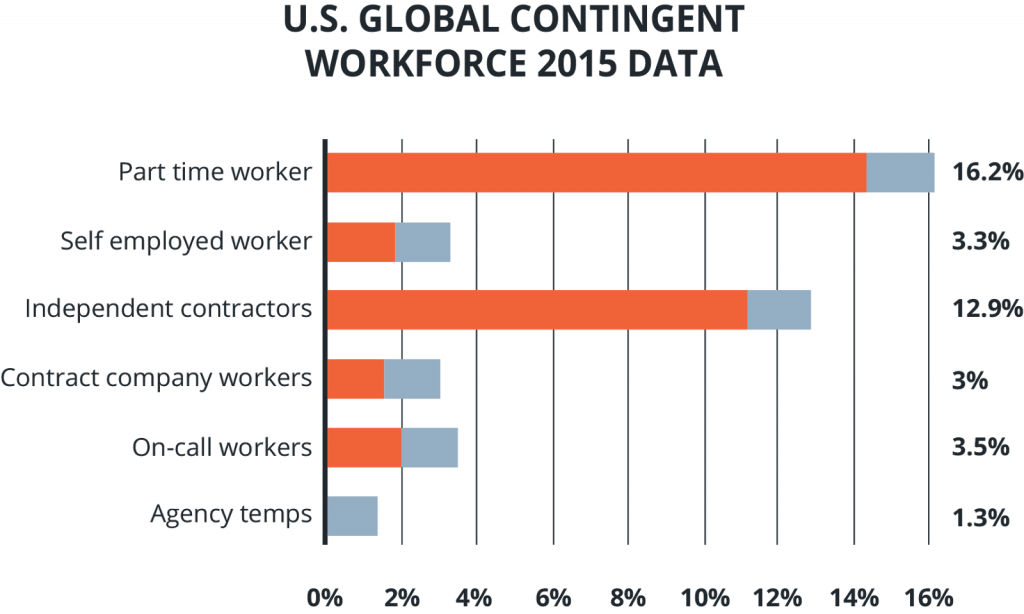 The Wall Street Journal reports that gig work takes up to 35% of all jobs in some industries like media, and women are more likely than men to support themselves with temporary work.  Other sources agree:

In 2018, it looks like the workplace, employee benefits, and even the nature of jobs is changing. Old fashioned top down management with industrial style office places and traditional workers are going away.

The work will still get done. It’s just that it will get done closer to where people live, like in their own kitchen. And it will be done by people who not only ask for time to take care of family needs, but expect it. Those people may be contingent workers, freelancers, or staff employees. And if business leaders really want the best talent to work for them, they’ve got to spend a bit more on human-centered perks, and make work fit into people’s lives.

Laura Handrick is a staff writer at Fit Small Business, specializing in the full cycle of Human Resource topics from recruiting to talent management. She holds SHRM certification as a Senior Professional in Human Resources (SPHR), a Master's in Educational Technology from San Diego State, and is certified as an International Franchise Executive through the IFA. She has worked with small business owners and managers as a business coach and served as the HR director in Fortune 100 companies. 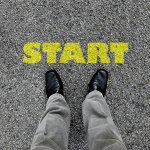 18 Compelling Reasons to Start a Business 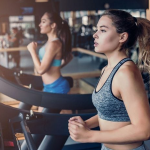