Matt has more than 10 years of financial experience and more than 20 years of journalism experience. He shares his expertise in Fit Small Business’ financing content.

This article is part of a larger series on Business Financing.

When comparing Kabbage and OnDeck to determine which has the best loans, a business should first consider whether or not it has an existing relationship with Kabbage. While Kabbage would be the preferred lender for recurring working capital, the company is only offering its lending product to existing Kabbage and American Express customers. For non-customers or for businesses looking to finance larger projects, OnDeck will be the lender of choice.

Kabbage vs OnDeck at a Glance

When to Use an OnDeck & Kabbage Competitor

Because of some limitations with OnDeck and Kabbage, borrowers should check out our list of the top working capital loan providers for more borrowing options. BlueVine is one of the top competitors of both OnDeck and Kabbage. It offers lines of credit of up to $250,000 with starting APR as low as 13%. Borrowers pay on a weekly or monthly basis, and funding can occur the same business day. For more information or to apply for a business line of credit, visit BlueVine’s website.

OnDeck offers larger loan amounts and faster funding. Kabbage offers a smaller line of credit, potentially unsecured loans, and monthly payments. However, Kabbage can take up to three business days for funding and is only open to existing customers.

For existing customers, Kabbage is a good choice for small and new businesses with its minimum annual requirement of $50,000, compared to $100,000 at OnDeck. Because fees are based on the length of the loan, short-term loans will be less expensive. Kabbage has raised the minimum credit score required to 640, so borrowers with low credit scores will likely have to go with OnDeck.

Kabbage borrowers can take out multiple draws at a time as long as the credit limit isn’t exceeded, while OnDeck borrowers must pay the loan down halfway before borrowing again. OnDeck has a strict rejection policy for borrowers not meeting the minimum credit score, time-in-business requirement, and annual revenue requirement.

Through the Kabbage mobile app, users can apply for, get approved for, and manage a line of credit. The app has a four-out-of-five rating on the Google Play store, with 368 reviews. Recent reviews have been more negative, with several one- and two-star reviews in 2021.

While OnDeck used to have an app, it is no longer available.

OnDeck and Kabbage continue to provide a tool through the Innovative Lending Platform Association (ILPA) to help businesses understand the costs associated with their loans and lines of credit. The disclosure is called SMART Box, and an example is shown below: 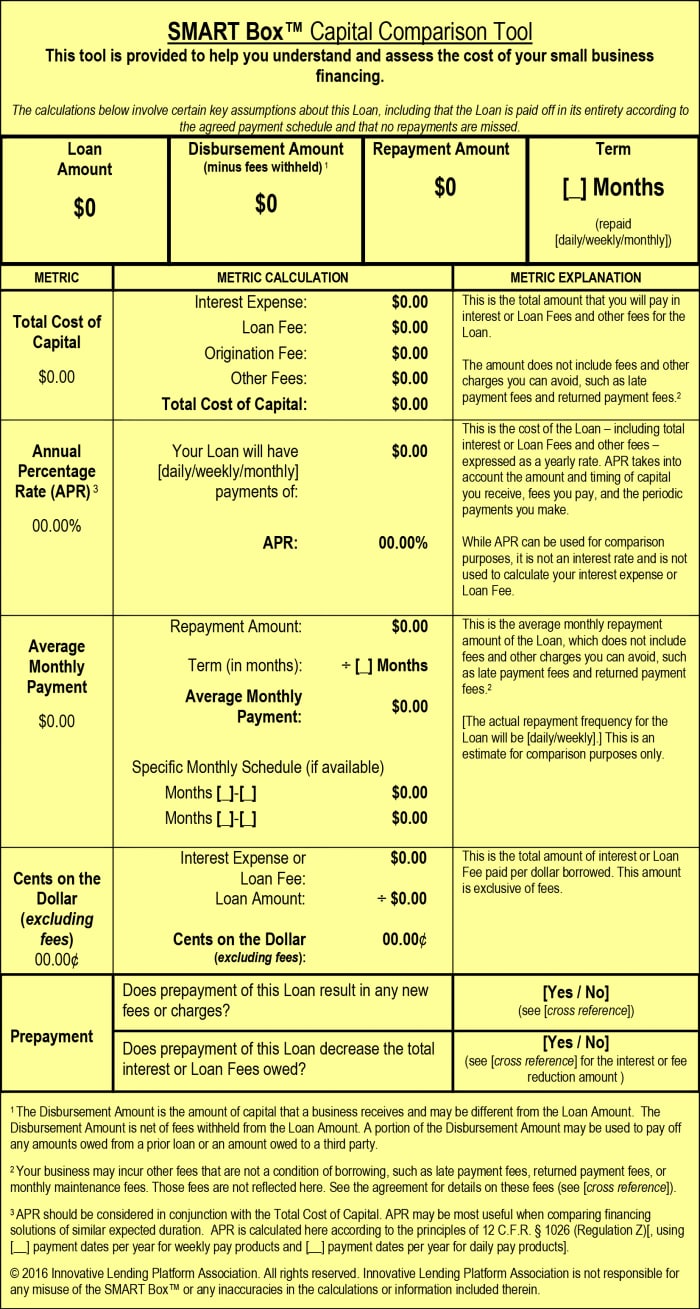 How We Evaluated Kabbage vs OnDeck

Kabbage has the edge in several areas, including lower maximum APR and less frequent payments. OnDeck offers a higher maximum loan amount, a longer minimum repayment period, and a quicker funding time. Kabbage (which was acquired by American Express) is not currently accepting new lending customers as of August 2021.

Because Kabbage only accepts existing customers for its lending product, it is very difficult to recommend them at this time. However, if a business is an existing customer of Kabbage or American Express, Kabbage has a solid line-of-credit product that has a low APR range and requires a very low annual revenue. On the other hand, OnDeck offers larger loan amounts, a longer minimum repayment period, and faster funding. Most importantly, OnDeck is open to new customers, making it the lender of choice when comparing OnDeck and Kabbage.

Matt Sexton is a staff writer at Fit Small Business, specializing in Small Business Finance. He holds a bachelor’s degree from Northern Kentucky University and has more than 10 years of finance experience and more than 20 years of journalism experience. He has worked for both small community banks and national banks and mortgage lenders, including Fifth Third Bank, U.S. Bank, and Knock Lending.

Sign Up For Our Financing Newsletter!
Sign up to receive more well-researched finance articles and topics in your inbox, personalized for you.
This email address is invalid.
Sign Up For Our Financing Newsletter!
(Only if you want to get insider advice and tips)
This email address is invalid.
Get a Business Loan Of Up To $500K
Get prequalified in minutes and funded in as quick as 1 day
Visit OnDeck!