Tricia has nearly two decades of experience in commercial and federal government lending. Her expertise is highlighted throughout small business loan content on Fit Small Business.

Microfinancing is used to stimulate economic growth by providing small loans to those who are underserved by conventional lending. This type of financing is used worldwide, with loans smaller than $100 offered in some underdeveloped countries. Readers can use the following statistics to learn more about how microfinancing works and the populations it serves.

The 27 microfinance statistics you should know are:

Among those with no access to financing are more than 5 million potential entrepreneurs worldwide who could start a business to generate income today if they had access to startup funding through a small loan. Microfinancing aims to reach people like these in order to foster economic growth.

Over 83 million microfinance borrowers reside in South Asia. While this may seem like a staggering number of borrowers in one region, it represents less than 5% of South Asia’s total population, which exceeds 1.8 billion people.

3. Of first-time borrowers, 80% are women near poverty

The intent of microfinancing is to provide financing to those who would otherwise be unable to obtain credit. People with insufficient incomes are often among the most underserved. Some microfinance lenders focus primarily on providing financing to women in an effort to encourage economic growth.

4. Of microloan-income earned, 92% goes back into the household

While this may not seem like a staggering statistic, consider that the top 100 banks in the U.S. have a default rate of nearly 4% on credit cards alone, with default rates greater than 5% (and as highly as nearly 11%) occurring numerous times since 2010.

6. In 2017, microlenders worldwide made loans to an estimated 139 million underserved borrowers for a total of $114 billion

While this is an impressive amount of money being invested in populations that would not otherwise have access to funding, this would indicate that the average loan size is only $820. For comparison, the average SBA 7(a) loan in 2017 was roughly $303,000. 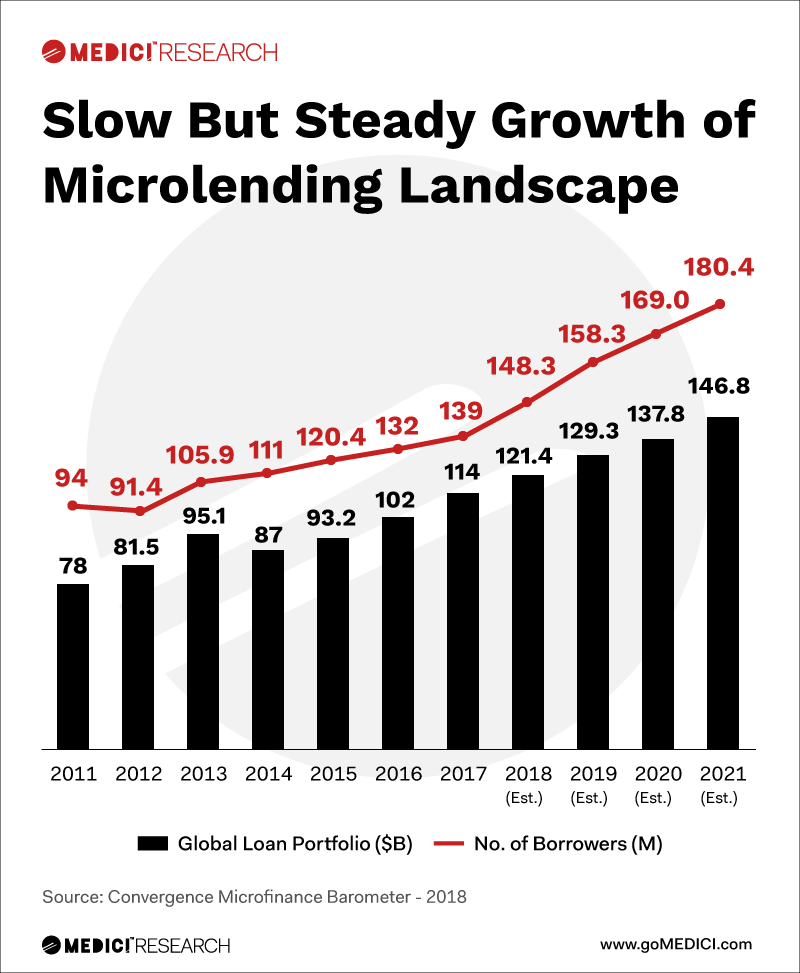 7. Microfinance only reaches 20% of the world’s 3 billion poor

Despite the extensive efforts to provide funding through microfinance, there are still billions of people that have not benefited from these programs. While microfinance has grown extensively in the past decades, it remains unable to reach the majority of its target market.

Despite being the majority of the labor force, these entrepreneurs are unable to obtain financing from large banks. Microfinance allows them access to capital to grow their business, their personal income, and the economy of the surrounding community.

9. There are more than 10,000 microfinance institutions in the world today

10. The World Bank Group has created a fund of $300 million to support microcredit

The World Bank Group is the leading investor in outreach to microfinancing institutions and promotes developments in technology, financial products, and business practices to help microfinance institutions worldwide expand their reach. Additionally, The World Bank Group is a lobbyist for global policy changes to improve the lives of the world’s poor.

The average growth rate for the microfinance industry increased by 20% to 30% annually, year-over-year, from 2008 to 2017. However, the rate of growth has declined since 2017, increasing less than 15% in total over the past two years.

This anticipated level of growth means that the microfinancing market will have grown by $15 billion since 2017. Globally, this represents a growth rate of nearly 13.2% over the past two years, which is lower than the 20% to 30% growth rate seen from 2008 to 2017.

13. Banks provided funding to only 33% of microfinance borrowers in 2016

While banks play a major role in small business lending, they are a much smaller force in microfinancing. Most microfinancing organizations worldwide are nonprofits with the purpose of reaching those underserved and underprivileged borrowers.

14. Microenterprises make up 92% of the total number of European enterprises

Because microlenders offer very small loans, they typically do not require any form of collateral. This allows entrepreneurs worldwide access to financing that they are unable to obtain from a more traditional lending source, as most banks will require that collateral be provided for a business loan.

16. The average interest rate for microcredit globally is 35%

While the global average is high, keep in mind that microfinancing serves populations that are considered high risk, and that do not have access to more traditional financing. However, in India, market forces have driven the interest rate below 25%, and the average interest rates for microfinancing in the United States are under 10%.

Having access to financing allows small businesses to grow and become successful. Funding is often needed to cover working capital needs, to hire additional employees, or to purchase equipment. The inability to obtain financing can be detrimental to small businesses.

18. Of businesses in the survey, 27% were unable to receive the business funding they needed

Of the 1,633 survey respondents, 27% (roughly 441 of the businesses surveyed) shared that they were unable to obtain small business financing when they needed it. Microenterprises made up 58% of the survey respondents.

19. The number of small businesses relying on large-bank financing has hovered at just 15% for the past two years

Large-bank financing comprised only 15% of all small business financing in the United States, with 85% coming from alternative lending sources. Securing financing—particularly from large banks—continues to be a challenge for small businesses nationwide.

The SBA microloan program provides small business loans through intermediary re-lenders. In one year, these intermediaries issued over 5,000 microloans to small businesses nationwide, supporting $76.8 million of the global microfinance industry. 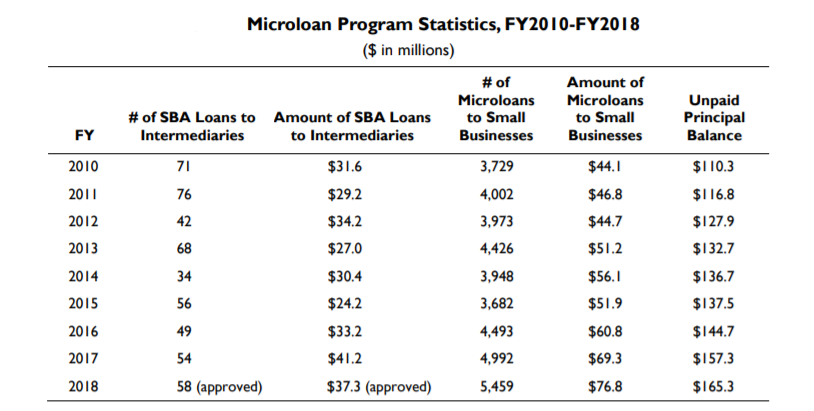 22. In 2019, the SBA was appropriated $4 million for its microloan program

It is estimated that this appropriation will support roughly $42 million in re-lending through SBA intermediaries. Most intermediary re-lenders operate revolving loan funds, where money can be re-lent as loans are repaid by borrowers.

This statistic is unsurprising, as 80% of the United States population resides in urban areas. Therefore, the 60 million rural Americans who comprise the remaining 20% of the U.S. population have received a proportionate amount of SBA microloans.

26. Startup businesses received 38% of the number of SBA microloans issued & 36.4% of the total microloan funding in 2018

Startup business funding can often be challenging to obtain. SBA microloans target these smaller startups, though only 38% of the loans made in 2018 went to newly emerging businesses. Further, an even smaller percentage of the microloan funding issued went to these startup businesses.

A lot of information has been covered about microfinancing through an assortment of microfinance statistics, including what microloans are, the impact they are making on the global economy, and where you can get them.

Some frequently asked questions pertaining to microfinancing include:

What are the benefits of microfinance?

The sole purpose of microfinance is to grow local economies. Microloans are provided to underserved borrowers to enable them to better their financial position by starting or growing a small business. By allowing the borrower to prosper, the business grows, employing more people, and purchasing more supplies from other local businesses.

What is meant by microfinance?

Microfinance is a type of credit provided to those who would not ordinarily qualify for a loan. Microfinance borrowers are most often unemployed or low-income individuals who do not otherwise have access to funding. These loans are often low-dollar amounts aimed at assisting the borrower in obtaining financial security through entrepreneurial growth.

What is microcredit & how does it work?

Microcredit is a small loan, typically less than $10,000, and averaging only $100 globally. These loans are used to encourage small business growth among those who are financially disadvantaged and unable to obtain conventional financing through traditional sources. Microcredit fosters economic growth in facets of the population that would otherwise be denied credit.

Microfinance plays an important role in our economy worldwide. It provides access to financing to the most underserved population and increases the economic livelihood of the world’s most impoverished. Microfinancing stimulates the economy by allowing new businesses to open and changes the lives of those lucky enough to receive funding.