Employee recognition is crucial to keeping workers engaged and motivated. To be effective, it should be immediate and specific—and when done right, it increases morale and productivity.

With these goals in mind, here are our 10 best employee recognition ideas for your small business.

A key component of employee management is recognizing individual team members when they succeed. When an employee goes above and beyond or lends a hand to a project that takes it to a new level, they deserve to be called out for additional praise. Their contribution should be noted so that they know you and other employees see their hard work.

You can show someone you appreciate their efforts by saying nice things about them. What you say needs to be specific and more than simply a quick “nice job.” It doesn’t have to be long, but it must be direct and specific; it also doesn’t have to be verbal. In fact, in today’s working environment, it might be better as a companywide announcement via email or messenger. Providing this level of feedback will make any employee feel appreciated and happy about the work they’ve done.

Example: “Your report on our lead sources was excellent. The charts were well-organized and illustrated where we need to invest more money and where our efforts are coming up short. I really appreciate your hard work in putting this data together. It helped our leadership team make quick, cost-effective decisions. Thank you and keep up the good work.”

Nothing speaks louder than a bonus. Despite not being the most original idea, it has stayed around for so long because it is effective. Publicly recognizing and thanking an employee for their efforts with a bonus not only shows them your appreciation but demonstrates to other team members that, with the right effort, they could see a similar reward. This motivates all employees to give their best every time.

To be effective, a bonus award should be commensurate with the employee’s contribution—anywhere from $100 to over $1,000 depending on the project is appropriate. Take care not to diminish an employee’s effort with an inappropriate amount, which may be demotivating. For instance, giving an employee a $20 bonus for spearheading a project that increased your company’s revenue by tens of thousands of dollars would seem out of touch.

Implementing an employee rewards program gives you a tool to immediately and specifically recognize members of your team. This is a great idea for companies because colleagues can recognize each other, leading to increased employee engagement.

There are several software programs available that allow you and your team to recognize each other for a job well done. Each employee gets a certain number of points to give out each month to other employees to publicly recognize their achievements. Over time, employees can save the points they receive and cash them in for rewards, like:

These programs also give you metrics so you can see who’s actively rewarding others, who’s getting rewarded, and who might just be sitting on the sidelines. Consider implementing a tool like this because it encourages peer-to-peer rewards, which are seen companywide, and gives your employees currency to trade in for an award they want.

A less-known but very rewarding employee recognition idea is the wheel of awards. Whether you build a wheel in your office or use an electronic version, you can put a few awards or even dozens on the wheel. When someone is recognized for their efforts, they spin the wheel and receive the award they landed on. 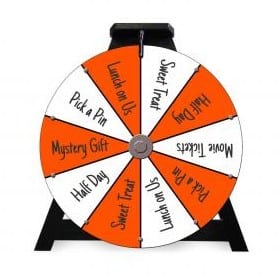 This prize wheel with dry-erase panels allows you to customize the prizes for your employees. (Source: Successories)

Some of the best wheel awards include:

The idea here is to be creative. As long as your budget allows, have a couple of big-ticket items on the wheel, like an entire week off or a cruise. The rest of the awards can be smaller, but throwing a few large awards on the wheel increases the excitement and suspense. Make sure you make a wheel spin an experience where the entire company joins in to watch and learn why the particular employee is being recognized. It only takes a few minutes, and it really gets people excited and wanting to spin the wheel themselves.

Employees want to know they are actively contributing to the team’s efforts and that their colleagues appreciate their work. A peer’s public recognition of a teammate can have greater meaning to an employee and show that their work is noticed not just by supervisors but by teammates as well. This can be accomplished through a group chat setting, such as Slack, and allow team members to award points or stars to other team members for their contributions.

Recognizing teams for their effort is also crucial. Although an individual may have had a significant impact on getting a project completed or landing a new client, if the entire team effort contributed, then the team should be recognized.

Hosting lunch for your team is a generous gesture. Tell your team why it is receiving the lunch by highlighting the collective accomplishments and mentioning specific individuals.

A happy hour is an excellent alternative to lunch. It often results in better bonding opportunities because colleagues are outside the office atmosphere and often more relaxed. Just like with lunch, though, make sure the team members know why you’re buying them a drink and give specific reasons for the recognition.

Don’t dismiss this idea if your company is remote. You can achieve the same results with either option. For lunch, you can send employees gift cards to order from a delivery service and join remotely. While they eat, you can speak about why their collective achievement was so important. For a happy hour, there are companies that will send your employees some pre-made drinks or the ingredients to make their favorite beverage.

Treating your team to a company outing can be an effective way to show your appreciation. Usually offered for a much bigger team effort, showing your appreciation by taking your team on a big getaway really shows them you noticed their contribution and took great effort to give them a similarly sized reward.

Some ideas include a:

This idea may require a larger budget, depending on the size of your team. However, if the team’s work significantly contributed to your company’s revenue, taking some of that projected cash and investing it back in your team will show them you value their effort.

Make this one a surprise. Whether you’re all in the same office or you’re remote, call people together for a quick meeting. Tell them you want to thank them for their hard work on a project and how they collaborated to meet a common goal.

Then surprise them by telling them to log off for the rest of the day or the week. They’ll appreciate it and understand why you’re doing it for them. Just make sure you’re letting them go early enough. If you tell your team at 4:45 p.m. to log off for the day, it doesn’t have the same effect as if you tell them at noon.

Similar to an early release, giving your team some time off goes a little further. Rewarding an individual or the entire team for a particularly successful effort should be matched by a corresponding reward.

This isn’t something every company can do, and certainly not after every successful endeavor. However, offering your employees a free paid time off (PTO) day on the company dime is a great way to show your people management skills. You can allow them to use their extra PTO day whenever they wish or put a limit on the timeframe in which it must be used.

While companies often use this idea at the end of the year around the holidays, it can be adapted to fit any time of year. People spend the holidays thinking about others—their families, kids, and friends. Taking your team on a shopping spree for themselves after a job well done lets them indulge in a bit of selfishness.

This might sound counterintuitive to the holidays, but it’s an incredibly effective way to showcase your appreciation for your team. It’s even better if you make a game out of it. Say you give each employee $300. You give them one hour to buy:

Making it into a game creates competition, especially if you offer a small reward for the winner. But it also makes it fun, giving your team a chance to bond over their success. When you make it clear that this opportunity is due to the team’s achievements, it only encourages them to work harder and achieve even greater success and growth for your company.

If you are unable to do something as grand as a shopping spree, or your team is remote, you could consider giving a gift card to a local store, or an online shopping experience (like Amazon).

Ideas for employee recognition range from small to large. To truly be effective and increase your employees’ engagement, your ideas need to be genuine and recognize specific accomplishments made by individuals or teams. What works for one company may not work for another, so try out different ideas and change them to fit your team. Your employees will always appreciate the recognition, even more so when it comes with a tangible reward.