Tricia has nearly two decades of experience in commercial and federal government lending. Her expertise is highlighted throughout small business loan content on Fit Small Business.

This article is part of a larger series on Startup Loans.

Crowdfunding is a popular method of raising funds for startup business expenses, charities, and personal causes. While funding isn’t guaranteed, crowdfunding statistics show us that a strong pitch and continued communications throughout your campaign can increase your chances of success.

The ten most eye-opening crowdfunding statistics are: 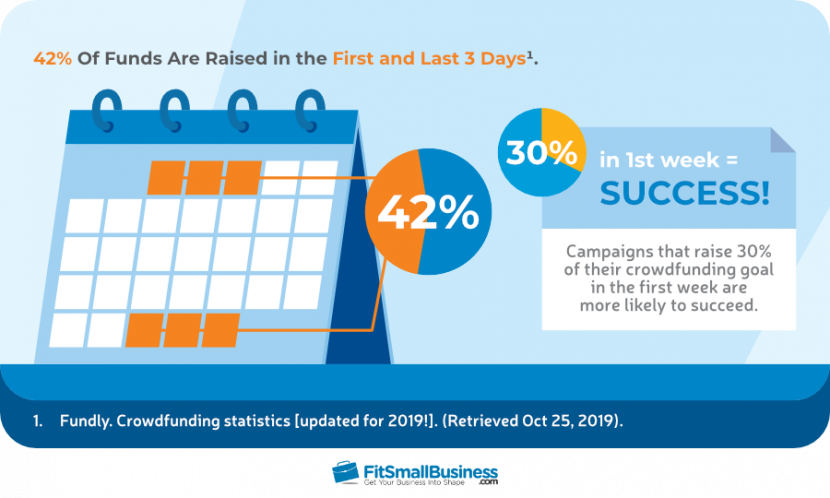 Crowdfunding campaigns see nearly half of their donations during the very beginning and the very end of the campaign. Why? Because campaign momentum is generally at its strongest when the owner is focused on drawing attention to it. In the first few days of fundraising, owners are focused on sharing the campaign and driving friends, family, and their professional network to the campaign’s website. In fact, campaigns that are able to raise 30% or more of their goal in the first week are more likely to be successfully funded.

Again, as the clock winds down on the campaign, the owner gives a final push—sharing and resharing the campaign—in last-minute attempts to fully fund their project. This renews interest in the project and results in more contributions. However, providing constant attention and updates to your campaign often leads to higher donation amounts, leaving less to be funded in the last push.

Who are these people contributing money to the campaigns of people they don’t know? The average crowdfunding donor is between the ages of 24 and 35. These millennials are the most likely to contribute to your crowdfunding campaign. Why? Because most crowdfunding occurs online, with social media playing a significant role. Millennials are also more likely than most to contribute small amounts spontaneously[4]. 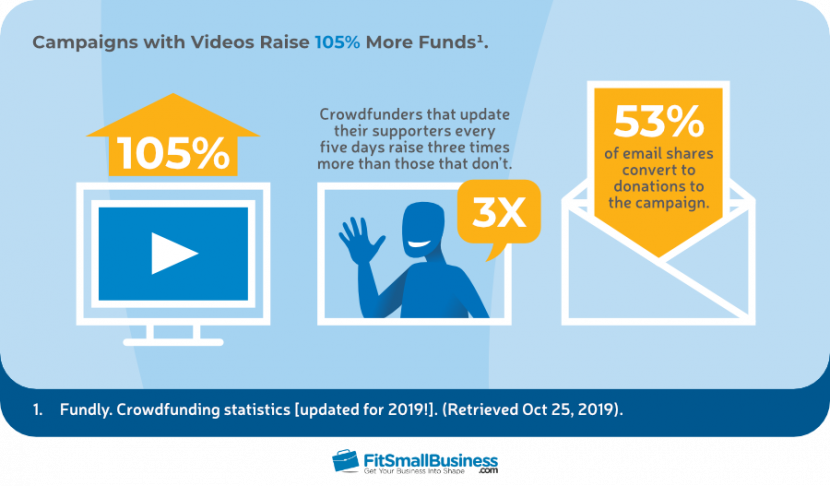 Want to increase the contributions to your crowdfunding campaign? Of course you do! Including a video in your campaign can increase the amount of funds raised by 105%. Videos allow potential contributors to see who you are, what the funding means to you and your small business, and how contributions from them benefit your goal. Sharing this personal message via video has more impact than simply writing out the same details.

Only 22.6% of Crowdfunding Campaigns are Fully Funded[2] Tweet This

Crowdfunding your small business isn’t easy. With a crowdfunding success rate of less than 25%, it’s far from being a guaranteed source of financing for your business. However, if you want to increase your odds of having a successful campaign, consider using an all-or-nothing campaign model.

All-or-nothing campaigns are twice as likely to be successful than a keep-it-all campaign. This is because unless a campaign is fully funded, they get nothing—despite all the campaign owner’s effort. This pressure doesn’t exist with a keep-it-all campaign, where even if you only get one $5 pledge, it’s yours.

Crowdfunding is up 35.1% Worldwide in the Past Year[5] Tweet This

The popularity of crowdfunding has grown annually and continues to gain momentum. With a 35.1% increase in the number of campaigns globally in the past year, this method of funding does not seem to be going away any time soon. New crowdfunding platforms continue to emerge as borrowers seek this avenue of financing.

Globally, $34 Billion has Been Raised Through Crowdfunding[1] Tweet This 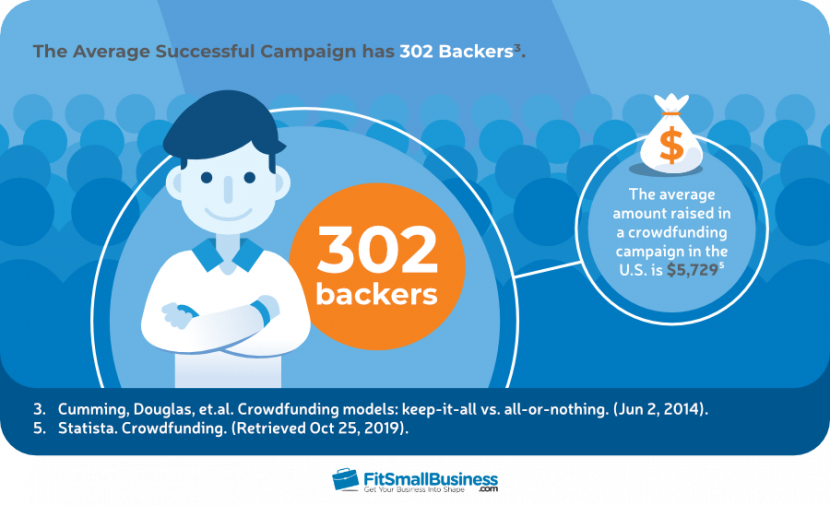 One of the benefits of crowdfunding is that people can contribute small amounts of money towards the overall success of the campaign. With many small donations from many people, crowdfunding can serve as a viable means for small businesses to receive startup funding without having to qualify for a loan.

However, the average campaign only raises $5,729, which is a far cry from the $30,000 typically raised by successful campaigns. This shortfall in contributions is the downfall of roughly 77%[2] of crowdfunding campaign that fail to achieve their funding goals.

As crowdfunding builds steam as a means of funding small business growth, the number of campaigns has increased year-over-year. As of the date of this article, there have been over 1.25 million crowdfunding campaigns initiated in the U.S. this year alone. That number is expected to grow to over 1.3 million by 2023.

Of Kickstarter Projects That Raised Over $1 Million, 37% Were Games[5] Tweet This 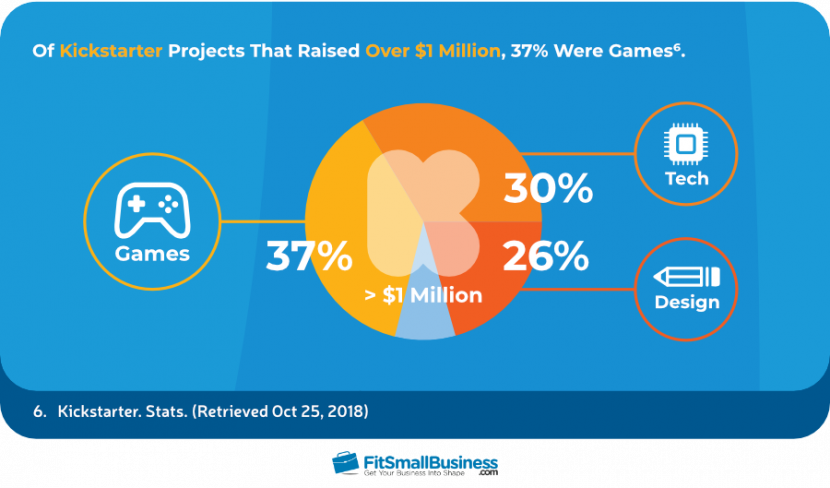 The crowdfunding platform Kickstarter tracks the crowdfunding success rates of its campaigns. If you’re operating in the gaming industry, you’re in luck! Kickstarter reports that 37% of campaigns that successfully raised over $1 million were game-related.

Crowdfunding success rates increase when campaigns last 113 days—just over 16 weeks. However, the average crowdfunding campaign only extends for nine weeks. A longer campaign provides more time for people browsing to stumble upon your pitch, allows you more time to spark interest amongst within your known network, and allows time for further sharing of your proposed venture.

These crowdfunding statistics indicate that the average campaign isn’t allowed enough time to reach its full potential. Be patient, allow your campaign to run for 16 weeks, and keep your contributors updated on the progress you are making.

Don’t limit yourself to a nine-week campaign, go for a longer campaign to increase your chances of success.

Do include a video with your campaign pitch to increase the amount of money you can raise.

Do keep your contributors informed about your progress toward your goal, and the efforts you are making towards your goal.