This article is part of a larger series on Unified Communications.

Microsoft Teams allows you to divide video conferencing participants into smaller groups called breakout rooms. This can be used to increase engagement, solve problems, or facilitate private side conversations, such as may be needed during a negotiation. We’ll show you how to use Microsoft Teams breakout rooms and detail the steps to create sessions, manage participants, join meetings in progress, and make the most of this feature.

Our explainer video shows the ins and outs of how to use Microsoft Teams Breakout Rooms, whether you are creating them before the video conference begins or during an online meeting. You can watch the full video or skip ahead to any specific instructions you are looking for. The video includes:

There are two primary ways to create breakout rooms in Microsoft Teams: before the meeting and during the meeting. Below we explain how to do both:

How to Create Breakout Rooms Before the Meeting

Navigate to your Teams’ calendar and open a meeting invite. Assuming you are the meeting organizer or presenter, click on “Breakout rooms” and then select “Create rooms.” Teams allows you to create up to 50 unique rooms.

The screen after you’ve created rooms and are about to start assigning participants (Source: Microsoft)

If you plan on using the same breakout room settings in future meetings, save your meeting as a recurring meeting. Once your meeting begins, select the “Breakout rooms” feature when you’re ready to divide participants into smaller sessions.

How to Create Breakout Rooms During a Meeting

It’s best to create breakout rooms before meetings begin to ensure more intentional room creation and teammate distribution. However, that’s not always an option. Fortunately, creating breakout rooms during a meeting is quick and easy.

The button to launch the Breakout rooms feature in-meeting

Assuming you are the meeting organizer or presenter, select “Breakout rooms” from your meeting controls bar. Choose how many rooms to create (up to 50) and whether to assign participants manually or automatically. 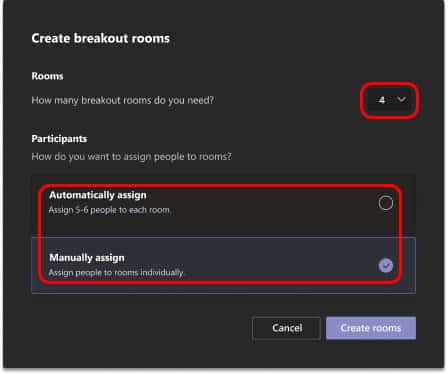 You can also set a time limit for your breakout rooms. This gives participants a visual indicator for how long they have to collaborate in their smaller groups before rejoining the larger video conferencing session. Change the toggle for whether you want to automatically move people to rooms (or back to the main session) or give them the option to manually join their assigned breakout room. 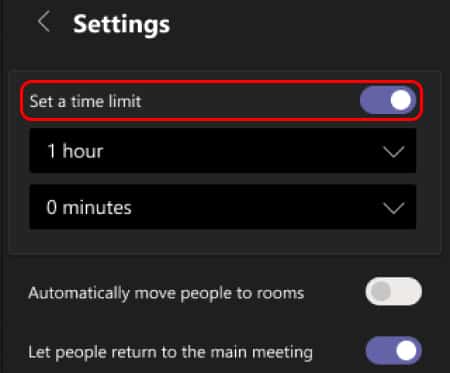 Setting a time limit for a Breakout room in Microsoft Teams

How to Manage Breakout Rooms in Microsoft Teams

You can assign breakout room managers during the session or while creating breakout rooms in Microsoft Teams before the meeting. Meeting managers can add or delete rooms, assign participants to rooms, join any room, set time limits, and send announcements. 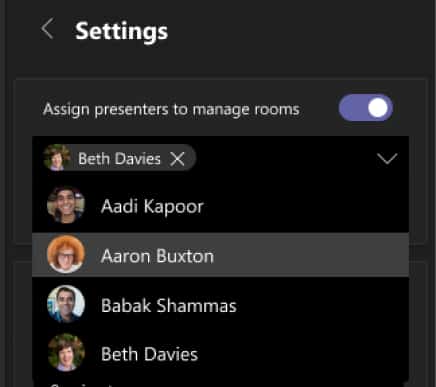 To appoint a manager during a meeting, go to “Breakout rooms” in your meeting controls. Select “Room settings” and turn the toggle on for assigning presenters to manage rooms. By default, any meeting presenter will be made a breakout room manager, but you can also choose your presenters from the provided drop-down menu. 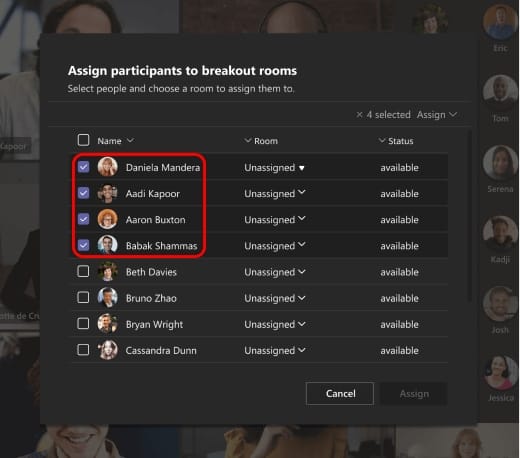 In your breakout room settings, you can choose to assign participants manually or automatically before or during the meeting. If you choose the automatic option, it evenly distributes people to the number of rooms you’ve created. 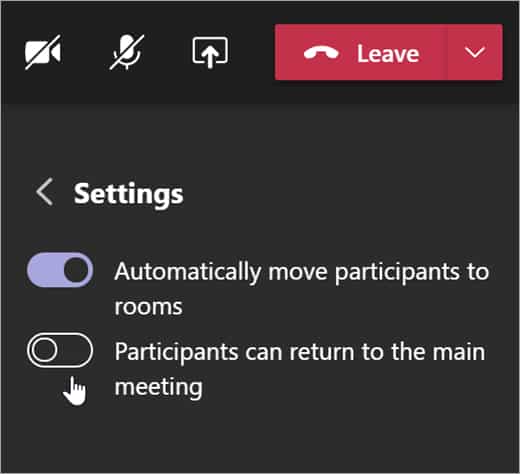 Decide how to assign participants during a meeting

Automatic assignment is the fastest way to assign participants, especially when it’s not important which room they end up in. Plus, you can manually move individuals later to assign managers, discussion leaders, or individual participants to the appropriate room.

How to Join Breakout Rooms in Microsoft Teams

As a meeting organizer or breakout room manager, you have the option to join any of the rooms—you don’t need to be assigned to a specific room. From your meeting controls, click “Breakout rooms.”

Next, hover over a room, select “More options,” and then click “Join room” to enter a specific room. If you’d like to leave that breakout room to join another, click “Return” in your meeting controls.

How to Close Breakout Rooms in Microsoft Teams

Closing a room ends that breakout session and returns participants to the main meeting. If you’ve turned off the option to automatically move people into breakout rooms, participants will receive a message asking if they want to return to the primary meeting or leave.

In-meeting screen where the manager can close rooms

Breakout rooms will also close if you’ve set a timer and the session duration ends. Once you’ve closed your breakout rooms, click the “Resume” button to meet as a single, larger group again.

Why You Should Use Microsoft Teams Breakout Rooms

Whether to facilitate a brainstorm session, foster collaboration, participate in a workshop, or have a side conversation, breakout rooms are a simple way to make it happen during video meetings. These are virtual spaces for unified communications where participants can engage and ultimately produce better work. In fact, 89% of people say video meetings enable faster task and project completion.

Microsoft Teams breakout rooms make virtual meetings, presentations, workshops, and webinars more collaborative and engaging. Experiment with all of the breakout room features and settings beforehand to ensure they go smoothly. However, Microsoft Teams may not be the right communications platform for your business. In that case, check out the best Microsoft Teams alternatives.

Corey McCraw is a subject matter expert in the realm of VoIP and unified communications. He has leveraged more than two years in this space to become well-versed in both the providers and technology associated with VoIP and UC. His work has appeared on GetVoIP and the Mio Dispatch as well as places like the Let’s Move! blog. Prior to entering the world of VoIP, Corey has served as a communications analyst for GroupM and has 12 years of marketing and writing experience.