This article is part of a larger series on How to Do Payroll.

Both employers and employees are responsible for payroll taxes. Federal tax rates, like income tax, Social Security (6.2% each for both employer and employee), and Medicare (1.45% each), are set by the IRS. However, each state specifies its own tax rates. Below is a state-by-state map showing rates for taxes, including supplemental taxes and workers’ compensation. A 0.9% additional Medicare tax must be withheld from an individual’s wages paid more than $200,000 in a calendar year.

If you need help calculating, paying, and filing payroll taxes, consider using Gusto. It houses tax rates for all states, so you don’t have to do the research. And if Gusto makes a mistake or pays late, it will cover any penalties you incur. Try it free for 30 days.

Payroll taxes are broken into two parts: taxes that employers pay and taxes that employees pay. As the employer, you’re responsible for withholding your employee’s taxes due from their paychecks and remitting it to the applicable tax agencies along with any amounts you owe. 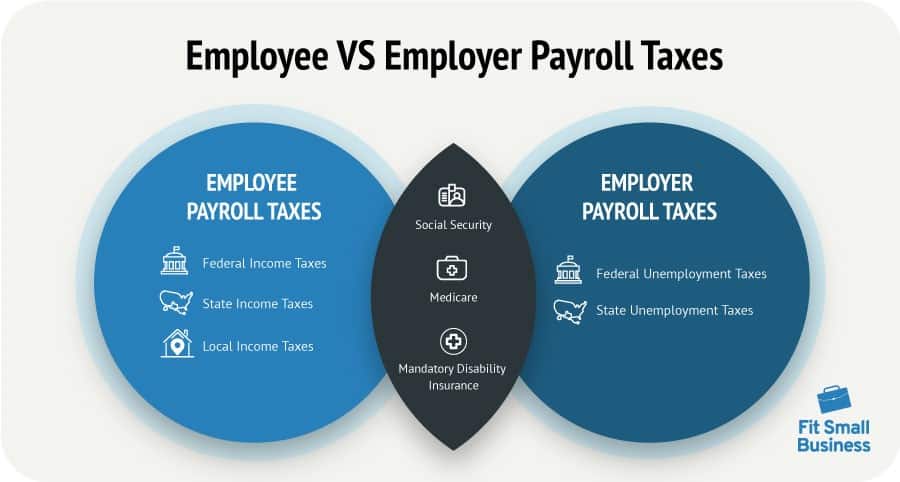 Employees are responsible for paying federal income taxes and state income taxes, if applicable. You may also have to pay and/or withhold local taxes, depending on where your business is and your employees reside. Both you and your employees pay federal Social Security and Medicare taxes (Federal Insurance Contributions Act or FICA), and unemployment insurance taxes, both federal and state, fall on you; you can get a discounted state rate if you pay federal taxes on time though.

Select your state from the drop-down box below for specific state-by-state payroll tax rate information. You’ll find whether your state has an income tax and any local taxes. You’ll also find a government link to learn more about your state’s employment taxes.

At the federal level, in addition to income tax, there are two categories of employment taxes: FUTA and FICA. We’ll cover each briefly as you’ll process these as tax deductions on employees’ paychecks. You must also pay these taxes on your employees’ behalf, regardless of the state in which you operate.

Some states have an income tax; others (like Alaska, Florida, Nevada, South Dakota, Texas, Washington, and Wyoming) don’t. The two states that tax investment income but do not assess personal income taxes are Tennessee and New Hampshire. However, all states have state unemployment taxes.

The percentage of SUTA varies by state. Each state determines the wage base or minimum earnings required for SUTA to be deducted. Others may refer to it as unemployment insurance (UI).

New employers pay 3.4% in SUTA for employees making more than $7,000 per year. They’ve renamed SUTA as State Unemployment Insurance (SUI). Existing employers pay between 1.5% and 6.2% depending on their unemployment experience. Those who lay off or terminate fewer employees will typically have a lower rate. These taxes are calculated on top of the FICA and FUTA taxes that employers in California and all states must pay.

Some states like Nevada and New Hampshire have no other employment taxes. However, they’re the exception. Most states have state income taxes, supplemental taxes, or taxes like workers’ compensation, disability, or local taxes.

Here are the most common state taxes.

Most states have an income tax. They tax a portion of an employee’s income based on withholding tables. Each state sets its own withholding tax rates, such as Arizona, which withholds between 0.08% and 5.1%, depending on the number of deductions an employee is eligible for.

Some states tax supplemental wages like bonuses, commissions, overtime, and severance pay as examples. Less than half of US states have no supplemental tax while the rest range from 1.84% to 11%—except Vermont that charges 30%. For instance, in California, employees are taxed 6.6% for most supplemental pay but are taxed at 10.23% if the supplemental pay is received from a bonus or stock option.

Workers’ compensation is purchased as private insurance by business owners in most states. However, states like New Mexico, Oregon, and Washington require it to be paid as a tax. As an example, Oregon employees pay 1.1 cents per hour while their employers match that rate for 2.2 cents an hour paid to Oregon to cover state-managed workers’ compensation.

Disability insurance differs from workers’ compensation, which covers on-the-job injuries only, by covering all injuries and health issues that affect a worker’s ability to work. Some states like California, Hawaii, and New York ensure that workers in their state have disability insurance coverage. Therefore, that additional insurance is included as a tax in those states. It ranges from 0.26% in New Jersey to 1.30% in Rhode Island.

Some states have begun to mandate employer-provided sick leave or paid sick time off, which means it operates like a tax. New York, for example, deducts 0.27% of the employee’s wages each pay period to cover paid leave for employees in that state. If your business operates in the following states, they have existing paid sick leave laws to follow.

How to Pay Federal and State Payroll Taxes

It’s best to set aside money for employment taxes each pay period, even if you’re only required to send payment monthly. You should definitely need to withhold money from your employees’ paychecks each period.

You will either need to deposit payroll taxes on a monthly or semi-weekly basis. If you owed $50,000 or less in taxes for the prior year, you can pay monthly; anything more than that puts you on a semi-weekly pay schedule. If you’re a new employer, you’re automatically placed on a monthly deposit schedule. For employers with very little payroll tax obligation (less than $2,500 a quarter), deposits can be made quarterly with the 941 tax return.

One important thing to note is that if you accumulate $100,000 or more in taxes, regardless of your deposit schedule, you must deposit the taxes by the next business day.

When you calculate your employees’ paycheck amounts, the amount they earned vs the amount they should receive, you should immediately route the money they owe in taxes to a separate account (if you’re using one account out of which payroll and general business expenses are paid). You need to ensure you don’t accidentally spend the funds.

To file employment taxes with the IRS and other agencies, you’ll need to use specific payroll tax forms so it’s clear what and how much you are paying; the forms have formulas that will help you calculate how much you owe, and the typical filing requirement is quarterly or annually.

You’ll need the following payroll forms when you file your employment taxes:

You must deposit the taxes by the respective due date to avoid interest and penalties and maintain compliance with payroll laws. If you pay independent contractors, you won’t need to pay or file taxes for them, but you will need to send in a 1099 form to the IRS (and the contractor) to show the total earnings you paid them throughout the year.

To see a bigger picture of how you should be processing payroll even beyond managing payroll taxes, check out our step-by-step guide on how to do payroll.

Consequences of Not Making or Being Late on Employment Tax Payments

If employers fail to remit payroll tax payments or send them in late, it could have the following impact:

Each state has its own terms of whether to have a state income tax, when tax payments are due, what rates they use, and what forms to file. We’ll cover some of the differences below to make you aware of what may vary in each state.

States That Have a State Income Tax

Not all states have a state income tax. However, in states that do, the employee must be asked what amount to withhold from the paycheck. That amount is to be withheld by the employer and paid to the state. The income tax rate varies by state and also varies by person based on factors such as their marital status and the number of exemptions they claim.

Employees provide this information on the equivalent of a federal W-4 form, which may be called by a different name in each state. For example, South Dakota has no state income taxes, while North Dakota does and uses the Federal W-4 to track withholdings. New Jersey also has state tax withholdings and tracks them on a Form NJ-W4.

Quarterly FUTA taxes are due if you owe more than $500 in taxes each quarter. The due dates are:

However, SUTA tax due dates varies by state. For example, in Michigan, the taxes are due on the 25th of the month instead of the end of the month: April 25, July 25, Oct. 25, and Jan. 25. Failing to meet the deadline may result in a penalty or late tax payment interest assessment. Therefore, you not only have to know what taxes to withhold and pay but also when and how to pay it—by state.

In the past, states took loans from the federal government when they could not meet their unemployment liabilities. Instead of getting a 5.4% credit reduction, some employers, based on the state they were in, saw their credit deduction reduced by as much as (and sometimes more than) 2.1%. As of 2021 though, the only credit reduction state isn’t really a state but a territory—the Virgin Islands. Its credit reduction is 3.3%, and if it does not repay its loan until Nov. 10, 2021, it will remain as a credit reduction state.

What that means is that you’re likely to pay higher taxes when hiring employees in the Virgin Islands as the credit reduction goes up by 0.03% a year, driving your tax up by that amount annually.

Around 18 states have taken federal unemployment loans as of Jan. 28, 2021, and they include California, Illinois, Massachusetts, New Jersey, and New York. If these loans are not settled by 2022, the Virgin Islands will not be the sole credit reduction state anymore.

Business owners who don’t want to deal with payroll taxes can opt to work with independent contractors. Freelancers and gig workers are independent self-employed contractors who work for you based on a project or deliverable. They’re not employees, and as such, they pay their own taxes. Just be sure you document your work agreement in a contract to make sure you’re both on the same page regarding work expectations.

You’ll need to familiarize yourself with the requirements as to when you can pay a worker as a contractor vs an employee. Learn the difference between what makes a worker an Independent Contractor vs an Employee.

Paying your payroll taxes correctly and on time is an important part to becoming a successful employer, but it can become challenging as you grow. Tax rates change from year to year, especially state payroll tax rates, and you must keep track of them to accurately calculate your business and your employees’ tax obligations.

Using a payroll provider like Gusto will help ensure you are always up-to-date on federal, state, and local payroll tax rates. The system calculates taxes according to federal and applicable state tax rates in its database. In addition, it files the taxes to the IRS and other tax agencies at no extra cost to you. Try it free today.