Tim is a Certified TSheets Pro, QuickBooks ProAdvisor, and CPA with 25 years of experience. He brings his expertise to Fit Small Business’s accounting content.

S corporations (S-corps) are corporations and limited liability companies (LLCs) that have elected to pass through their income, deductions, and credits to be taxed on the owner’s tax return. S-corp tax rates are the same as the personal income tax rates because the owners pay S corporation taxes on their share of the company’s income.

What Is an S Corporation?

Like S corporations, partnerships pass through income, deductions, and credits to the partners’ returns. However, there are some very important differences between S corporation and partnership taxation:

S corporations generally receive favorable tax treatment compared to C corporations and partnerships, but there are some situations that business owners need to avoid:

How to File S Corporation Taxes

An S corporation must file Form 1120S, including Schedule K-1. An S-corp typically has employees, and this requires running payroll and filing payroll tax returns, including Form 940 and Form 941. S-corps will also need to issue Form W-2 to employees and Form 1099-MISC to independent contractors.

The tax forms required to be filed by most S corporations are:

When Federal S-corp Taxes Are Due

Tips for S-corp deadlines include:

Other Tax Responsibilities for S-corps

Some other responsibilities for S-corp taxes you should consider are:

To help you keep track of your responsibilities, we’ve created a free S-corp taxes checklist. 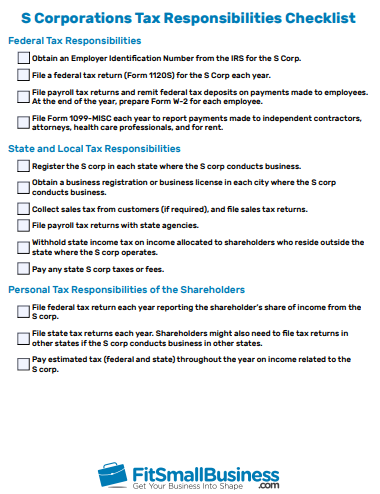 How to Get S-corp Status

A business must satisfy six requirements to elect S-corp status. These requirements limit how many owners a business can have as well as the types of people or entities that can be owners. If you qualify, prepare Form 2553 and submit it to the IRS.

In order to qualify for S-corp status, your company must:

Once you have determined that you qualify as an S-corp, you need to complete Form 2553 (Election by a Small Business Corporation) and have it signed by all shareholders.

The deadline for submitting Form 2553 varies based on your firm’s situation:

Filing taxes as an S corporation may have many advantages for your business. However, it’s important to always consult a tax professional before making an election as an S-corp. Be sure to weigh all the options available and choose the business structure that works for you.

Regardless of your business structure, we recommend using QuickBooks to keep track of everything you need to file your taxes. This accounting software tracks all income and expenses and compiles the information you need to fill out S-corp taxation documents. Get started and save up to 50% off QuickBooks Online.

Tim Yoder is a subject matter expert at Fit Small Business focusing on small business bookkeeping, accounting, and tax content. He received his Ph.D. from Penn State and then taught tax and accounting to undergraduate and graduate students as an Assistant Professor at both the University of Nebraska Omaha and Mississippi State University. Tim is a Certified TSheets Pro, QuickBooks ProAdvisor for both the Online and Desktop products, as well as a CPA with 25 years of experience. He most recently spent two years as the accountant at a commercial roofing company utilizing QuickBooks Desktop to compile financials, job cost, and run payroll.