Rain is a staff writer at Fit Small Business focusing on sales, such as VoIP and video conferencing.

This article is part of a larger series on Unified Communications.

Avaya Cloud Office is a cloud-based phone system—powered by RingCentral and Avaya—that allows users to manage business communications across channels in a single platform. Its monthly fees for accounts with two to 20 users start at $19.99 per user, per month when billed annually. If your business has both on-site and remote team members, Avaya Cloud Office helps streamline business workflows, so that you can provide better customer service.

What We Recommend Avaya Cloud Office For

Avaya Cloud Office is a cloud-based unified communications (UCaaS) system accessible through voice-over-internet-protocol (VoIP) hardware and desktop and mobile devices. If your company has remote employees, this provider is worth considering. Its robust features are accessible from anywhere—letting your teams stay productive even when they’re not physically present in your office.

When to Use Avaya Cloud Office

When Avaya Cloud Office Would Not Be a Good Fit

Looking for more options with affordable rates? Check out our guide to the best low-cost or free united communications platforms to discover products for your needs.

Avaya Cloud Office lets users choose from its four-tiered subscription options. Monthly fees start at $19.99 per user when billed annually or $22.99 per user when charged monthly for accounts with two to 20 users. All plans include a business phone number, 24/7 phone and chat support, unlimited calls within the U.S. and Canada, and access to mobile and desktop apps.

*Annual plans are paid in full at the beginning of the billing cycle.

Avaya Cloud Office offers four subscription options geared toward scaling businesses. It showcases precise pricing information, unlike other providers, like 3CX, that separate fees for hosting and licensing. Like most providers, such as Nextiva, it offers discounted pricing on long-term contracts, beginning at 12 months.

Though Avaya Cloud Office provides plans that support unlimited users, it allows customers to register only one user to any of its plans at a higher monthly rate. It also packaged its features and inclusions to cater to businesses’ growing needs—allowing plan upgrades once the need arises.

Since RingCentral powers Avaya Cloud Office, its plans are pretty similar. If you do not need Avaya services and hardware, you may go directly to RingCentral, which has additional discounts from time to time.

Avaya Cloud Office lets you purchase add-ons as needed if you need more capabilities and services in addition to what’s included in your plan. Let’s discuss these options in detail below.

Avaya Cloud Office comes with a comprehensive set of UCaaS capabilities that can be accessed from any device. It works best for companies with remote employees as its service and hardware options support the collaboration of team members regardless of their locations. Those with basic needs may find its advanced features overwhelming and may look into simpler systems like Grasshopper or Google Voice instead. 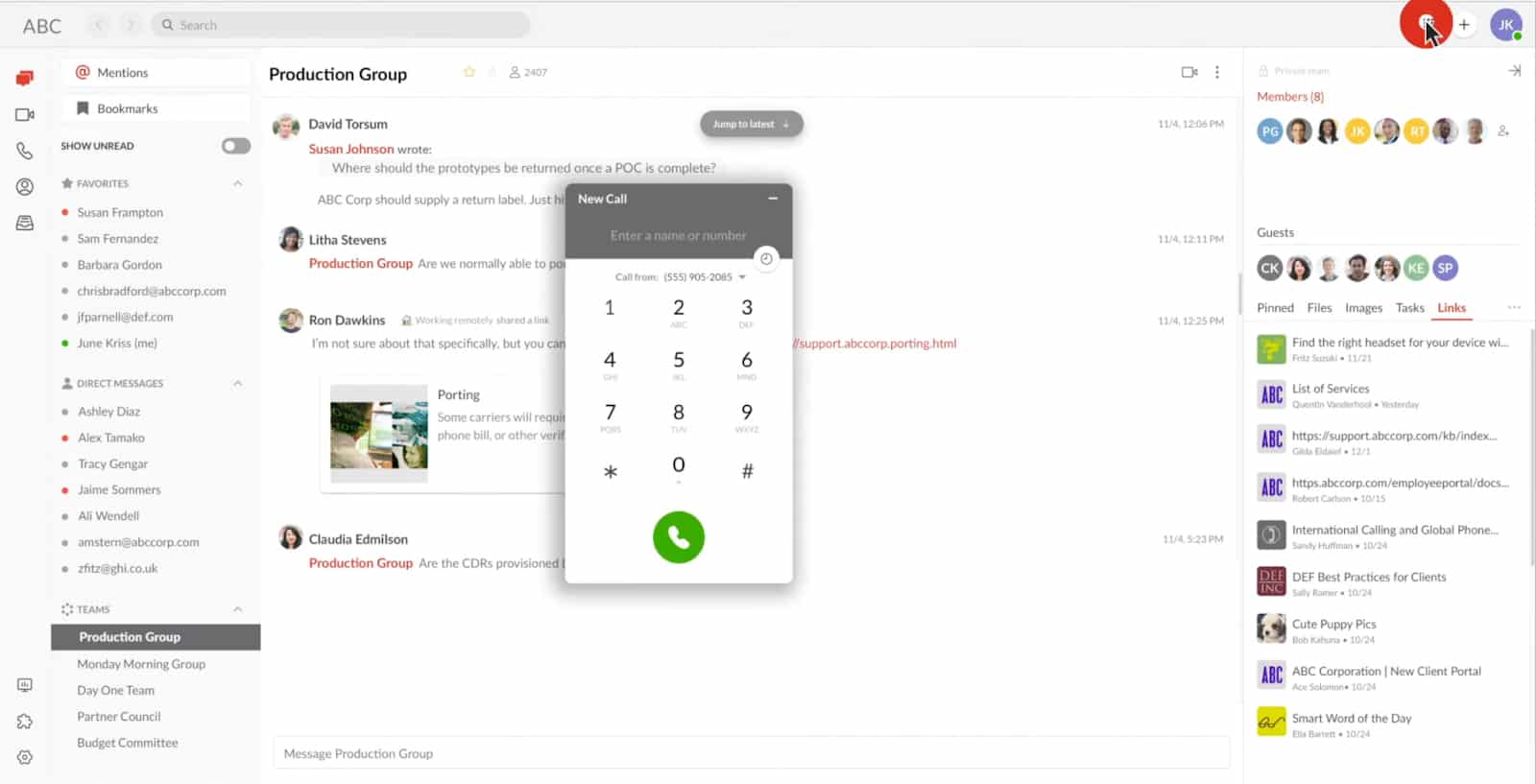 While there are cheaper alternatives on the market, like 3CX, Avaya Cloud Office stands out by providing advanced functionalities, including a developer platform and industry-specific integrations. The extra costs are worth it for those who can maximize all the functionalities. Furthermore, its comprehensive system helps establish a more efficient business workflow and better customer service.

Know the essential features you should check out when looking into UCaaS platforms. Read our article on the best unified communication tools for remote workers for more information.

Avaya Cloud Office lets you manage business communications across channels, including calls, fax, voicemail, texts, and team messages. You can use a single number for calls, texts, and faxes—eliminating the need for your customers to memorize multiple numbers to reach you.

It also offers a variety of team collaboration features, such as file sharing and video meetings. Teams with members across locations can find this platform very helpful as it lets them work together and serve their customers from anywhere and any device. 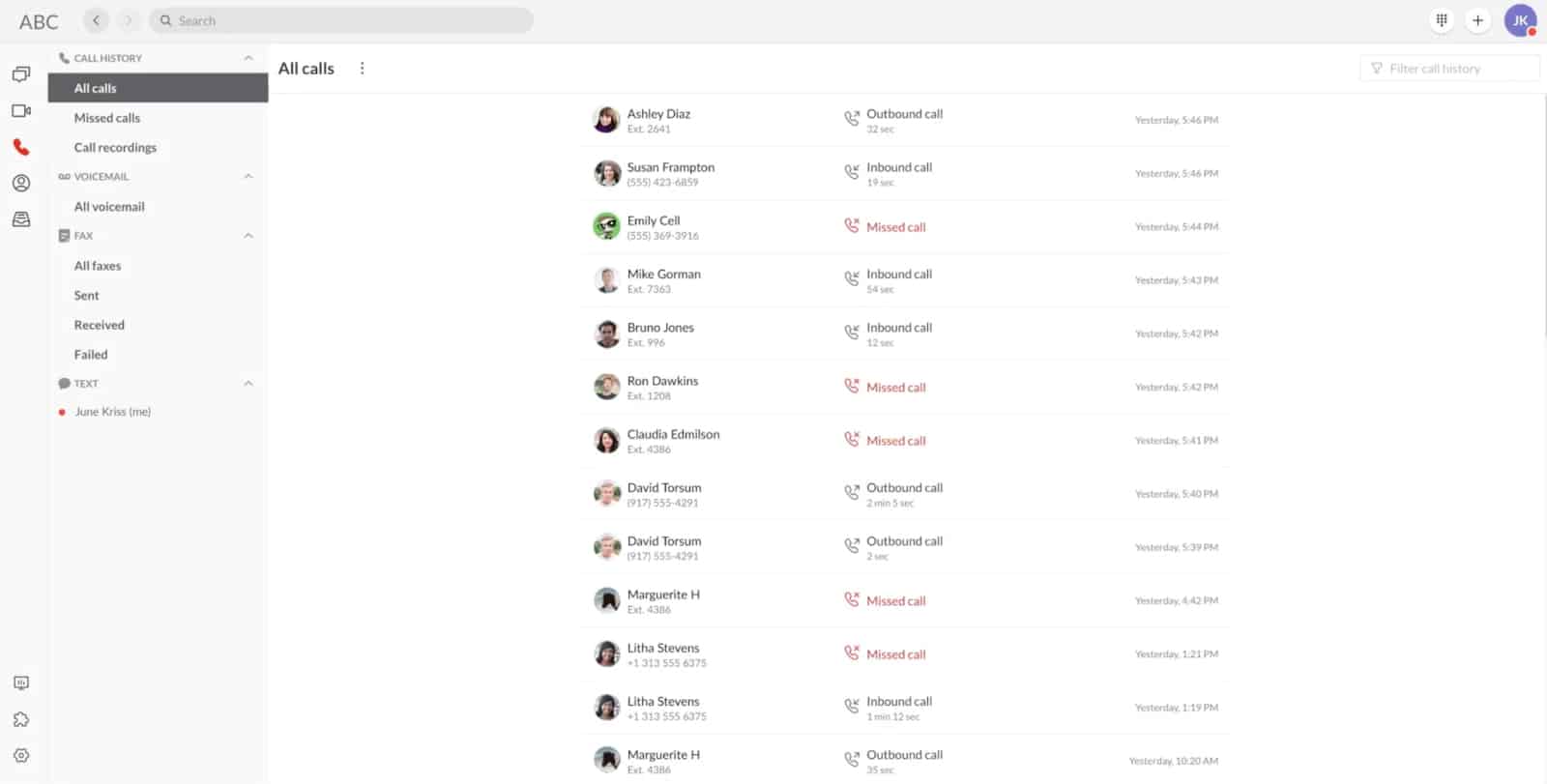 Conduct collaborative virtual meetings with Avaya Cloud Office. It allows users subscribed to Standard, Premium, and Ultimate plans to host video conferences for up to 200 participants, depending on their plan. Businesses that have presentations and meetings with clients and colleagues, such as demonstrations and webinars, will benefit most from this feature. 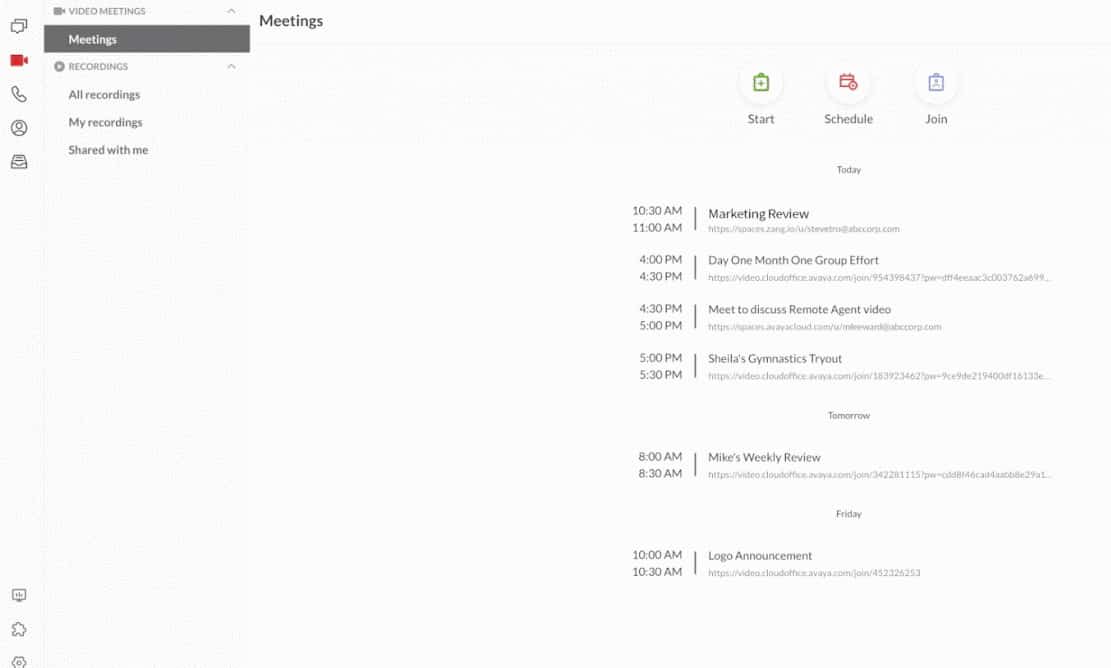 Meeting hosts can easily invite participants through email, call, or link. Participants aren’t required to download its Avaya Cloud Office app as they can join a session through a web browser. If you are having team meetings, you may also assign tasks, perfect for staying on top of your workstreams.

An Avaya Cloud Office subscription comes with a free mobile app that you can download on your tablets or smartphones. It enables you to manage calls, meetings, faxes, texts, conferences, voicemails, notifications, and system settings. Apart from remote workers, employees who are always on the go can ensure that their productivity isn’t tied to their desks. 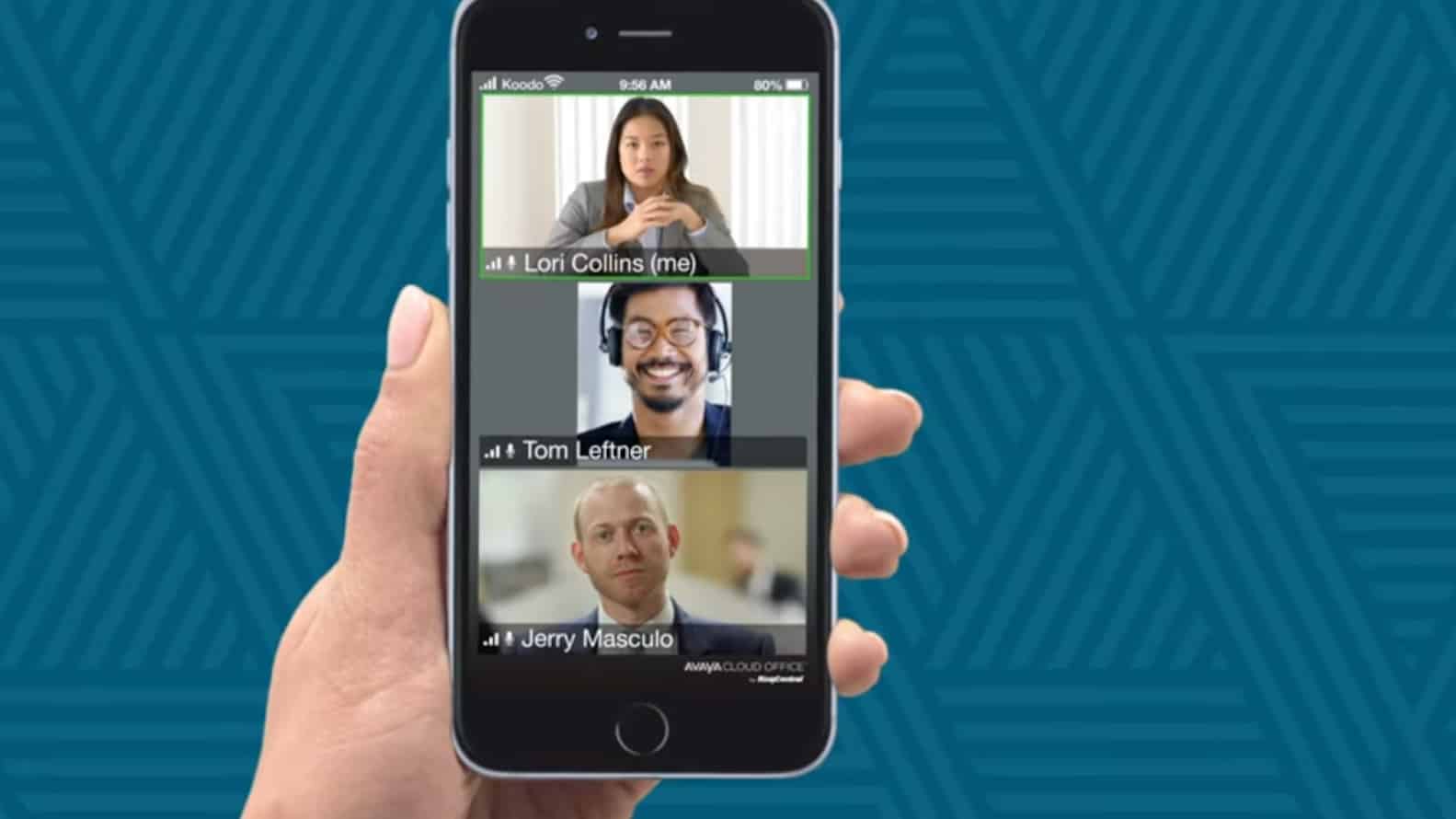 Avaya Cloud Office lets employees and customers collaborate, even through its mobile app. It allows users to schedule meetings, assign tasks, share files, send and receive team messages, and launch video meetings. If you do not want to disrupt work when you are off-site, then Avaya Cloud Office is worth looking into.

Though Avaya Cloud Office is powerful on its own with its premium communication and collaboration features, it makes it even more efficient to utilize with widely used third-party apps. You can easily integrate your existing tools, such as Jira, Slack, and Mailchimp, into the Avaya Cloud Office platform for a more streamlined workflow. 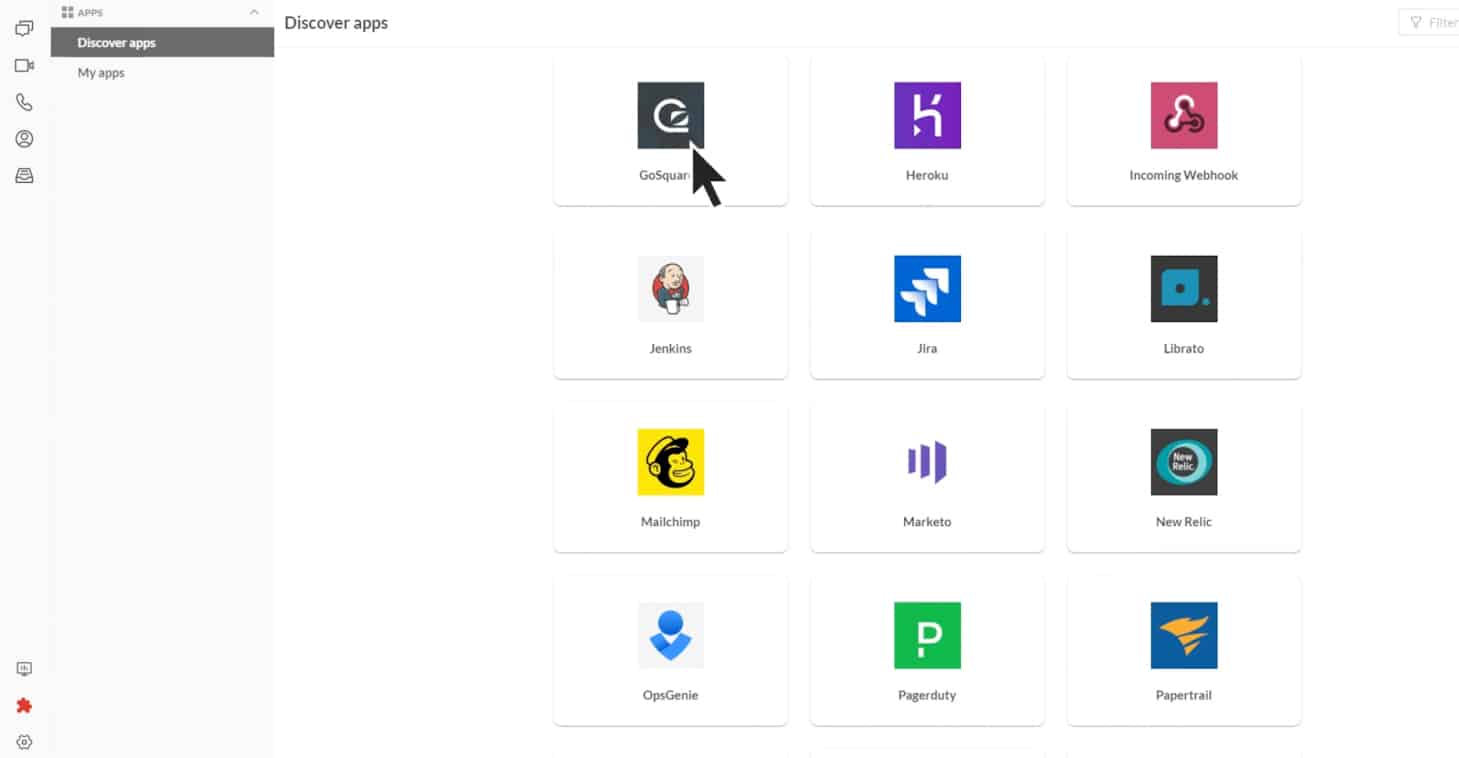 For instance, matching customer records will be automatically displayed with an Avaya Cloud Office integration with Zendesk. Additionally, you can easily create new Zendesk cases from the Avaya Cloud Office platform—enabling your agents to support your customers faster and in a more personalized manner.

Want to know which cloud-based platform you need for your business? Read our UCaaS vs CCaaS guide that discusses their differences and when to use them.

Want to learn more about UCaaS and discover some top providers? Check out our comprehensive guide on what UCaaS is and how it helps businesses.

Most Avaya Cloud Office reviews align with our analysis of it being a robust and reliable system. It helps users manage communications across multiple channels in one platform. It also provides a lot of value given its affordable subscription fees and comprehensive features powered by Avaya and RingCentral.

At the time of publication, Avaya Cloud Office has earned the following scores on popular user review sites:

Many users are impressed with its user-friendly and straightforward platform. Others mentioned that its functionalities are easily customizable according to their needs and that its voice quality is impressive. A few customers commented that there were delays in call forwarding and transfers. Additionally, some users reported software bugs, like crashes, often fixed through updates.

Avaya Cloud Office is a great option for those companies looking for a UCaaS platform with advanced functionalities and wide-ranging integrations. Its cloud-based system gives users access to its call handling and omnichannel communication features from any device. You can also collaborate with remote team members with its video conferencing capability with added tools like screen sharing.

Those who currently utilize hardware from other popular providers, like Yealink and Cisco, should try RingCentral instead. It provides the same packages, plans, and cheaper monthly rates, and occasionally offers added discounts on top of the usual long-term contract price cuts.

Businesses utilizing Avaya hardware must subscribe to the Avaya Cloud Office. Furthermore, while Avaya is powered by RingCentral, its services work best for the Avaya brand.

Corey McCraw is a staff writer at Fit Small Business who covers VoIP and Unified Communications. Before his time at FSB, Corey was a senior tech reporter at GetVoIP. Corey has a background in marketing, tech writing, and corporate communications. In the past, Corey has worked with numerous brands across a variety of verticals and has even penned content for the former First Lady Michelle Obama’s Let’s Move initiative.

Rain is a staff writer at Fit Small Business specializing in sales. She brings with her a decade of experience in designing graphics and writing for businesses. Rain holds a journalism degree, MA units in communication arts, and several certificates from universities across the globe.