This article is part of a larger series on POS Systems.

Thermal receipt printers are tissue box-sized printers that connect to a cash register or point-of-sale (POS) system and print hardcopy receipts for sales transactions. Thermal receipt printers are the most common in small businesses because they print using heat on thermosensitive paper rather than expensive ink cartridges. Pricing for a solid thermal printer averages around $350. You can purchase them directly from retailers or via your POS system supplier.

Based on our evaluations, the best thermal printers are: 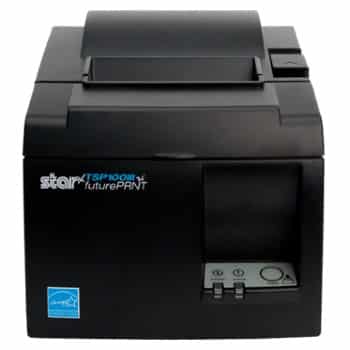 Star Micronics’ TSP143IV is the fourth generation of its popular TSP 100 series printers. The previous version of this printer—the TSP143III—took the top spot in our previous ranking, and the new version is even stronger. With a 20% smaller footprint, this dependable thermal receipt printer is sleeker than its predecessor, while still supporting powered USB connections to power POS tablets in addition to printing receipts.

The TSP143IV earned a 4.45 out of 5 on our thermal receipt printer scoring system. This printer scored well for its combination of print speed, multiple network connection types, warranty, and reasonable price. It lost some ground with user reviews, though. The Star Micronics TSP143IV averages 4.4 out of 5 on sites like Amazon. Other printers on this list—the Epson TM-T88VII—earned ratings above 4.5.

And while 250 mm per second is an excellent print speed, it is not the highest speed on this list; the Epson TM-T88VII eclipses it at 500 mm per second. So if you need speed for high-volume printing, you’ll be better served by the Epson offering.

Since our last update:

Star Micronics expanded our former top-rated printer, the TSP143II, by: 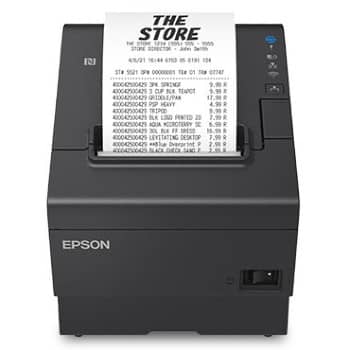 The Epson TM-T88VII is the latest model of Epson’s ubiquitous TM-T88V printer. The T88 has been one of the most popular receipt printers for more than a decade. These printers are absolute workhorses and offer the fastest-available speed, making them great for high-volume settings. They also integrate directly with tons of POS systems (see full list below).

The TM-T88VII earned a 4.43 out of 5 on our thermal receipt printer ranking. The printer earned high marks for its connectivity options; the TM-T88VII connects via ethernet, USB, Bluetooth, or Wi-Fi (via a wireless USB dongle). The printer also scores well with customers; average customer ratings range from 4.5 to 4.7 out of 5 on Google and Amazon.

The biggest drawback of this printer is the price. Brand-new TM-T88VII’s will run you around $400, the highest price on this list. You’ll be tempted to look for deals or buy used, but be careful—because various versions of the T88 have been around for so long, sellers on third-party sites like eBay can easily mistakenly list their T88 printers as the latest version when they are not. And not every T88 has every connection type; you’ll need to double-check that the printer you’re buying has the connection type you need.

When looking at thermal printers, you’ll frequently run across the phrase “Epson emulation.” This term simply means that a printer has been built to speak the same printer “language” as an Epson printer. The Epson T88 series printers’ ubiquity makes them the printers that so many competitors try to emulate and the one that most POS software developers program for. 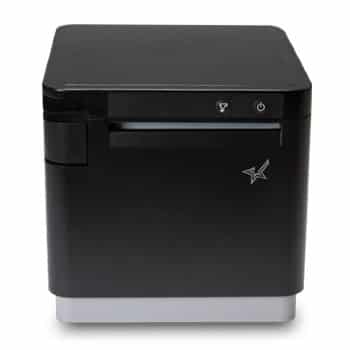 Check out the Star Micronics mC-Print3

The Star Micronics mC-Print3 is a compact, front-loading thermal receipt printer. This petite, cube-shaped printer is a little over 5 inches square, making it easy to squeeze into tight cash wraps and server stations. The front-loading design may be a little tricky to load, but it protects the print head from spills and helps your receipts print flat with no curling. These features make the printer an excellent choice for busy bars that need sleek hardware that can withstand splashes and spills.

This compact printer earned a rating of 4.20 out of 5 on our thermal receipt printer ranking system. The mC-Print3 scored well for POS compatibility and a variety of connection types. It lost points for some less favorable customer reviews and a less durable auto cutter.

For example, the mC-Print3’s sibling printer the TSP143IV is rated for 2 million cuts, but Star Micronics doesn’t disclose the mC-Print3’s cutter life span, which doesn’t instill confidence. While others on this list like the Epson TM-T88VI average 4.5 to 4.7 in online customer reviews, the mC-Print3’s average user rating comes in lower at 4.4 on sites like Amazon.

Check out the Square Terminal

The Square Terminal is a handheld POS terminal with an integrated thermal receipt printer. This device is fully mobile, operates via Wi-Fi, with a battery that stays charged all day. This printer and terminal is a terrific fit for solopreneur service businesses that need to process payments in the field, mobile businesses that sell at traveling markets, and food trucks. It is also a great fit for retailers and restaurants that want to process sales and payments on the shop floor.

The Square Terminal earned a 3.36 out of 5.00 in our thermal receipt printer scoring system. It earned a perfect score for price, coming in under $300 and offering an easy payment plan. Though it lost some points for only operating with Square POS systems when the competitors on this list integrate with a slew of systems. It is also not the fastest printer and only comes with a one-year warranty (competitors Star Micronics and Epson offer two years or more).

You can use the Square Terminal with a virtual terminal on your computer or laptop, without using a full-scale POS app. If you prefer a POS app, the Terminal seamlessly integrates with Square’s excellent small business POS line up:

Square Terminal does not currently support the Square Appointments app, but Square plans to roll out this feature in the future. All Square POS systems offer a free baseline subscription with no long-term contracts.

See what else Square has to offer by checking out our reviews of Square POS, Square for Retail, and Square for Restaurants.

We compared a dozen popular and emerging thermal receipt printers based on qualities important to small shop and restaurant owners. We weighed the price, general features, and ease of use for each printer. We also considered our retail and restaurant experts’ opinions of each hardware option and any special use cases (like full mobility) that support different business types.

Using the above criteria, the Star Micronics TSP143IV emerged as the best thermal receipt printer. This printer received the highest overall score according to our ranking system (4.45 out of 5). Based on our personal experience working in and with small businesses that use thermal receipt printers every day, the Star Micronics TSP143IV is also the top printer we personally recommend.

Click through the boxes below for our full evaluation criteria:

We considered each printer’s print speed, connection types, and available POS integrations. We looked specifically for printers that can act as a power hub for mobile POS terminals. We also looked for features like long life span auto cutters and de-curl functions.

Finally, we relied on our experts’ experiences with these printers and their evaluation of any standout features. We considered each printer’s popularity among small retail and restaurant businesses. We also considered whether each printer offered an overall value for the price.

Can a thermal printer print receipts?

Direct thermal printers are popular for printing receipts because they do not require ink cartridges for printing. This makes them cost effective for high-volume printing tasks like receipts in shops and restaurants.

The real ace up this printer’s sleeves are the CloudPRNT and PromoPRNT settings that allow you to print receipts and coupons directly from cloud-based applications like online ordering apps. To see if the TSP143IV is the right printer for your shop or restaurant, explore the printer for yourself.

Mary King is an expert retail and restaurant contributor at Fit Small Business. With more than a decade of hospitality experience, Mary has worked with some of the best restaurants in the world, and some of the most forward-thinking hospitality programs in the country.