Voice-over-internet-protocol (VoIP) phone systems convert voice into digital signals, allowing you to make calls directly from mobile devices, tablets, and computers. They offer cost-effective, scalable, and feature-rich communication solutions for small businesses. In this guide, you will learn about the short history of VoIP phone systems and how they became today’s mainstream communications solution.

VoIP is a communication technology developed in the last century. It is founded on other technological innovations, specifically the telephone and the internet. VoIP has distinct advantages over traditional phone systems with comprehensive integration, video and automated features, and multichannel reach.

Here are some of the critical communications milestones that led to VoIP:

English philosopher Robert Hooke invented a primitive audio transfer device as early as 1667. He used a string telephone instrument to send sound waves over an extended wire via mechanical vibrations. However, the world would need to wait another 200 years for the next major step in the evolution of transmitted communications.

In 1876, Alexander Graham Bell invented the telephone and was awarded for telegraphing vocal and other sounds. By the 1880s, telephone exchanges were built in every major U.S. city.

One of the defining moments of telephony began in 1925 when AT&T and the Western Electric company joined forces and established the Bell Laboratory. Bell Laboratory sought to invent and design technologies that would expand communication services. By 1958, the first U.S. communication satellite was launched.

In 1966, Fumitada Itakura of Nagoya University and Shuzo Saito of the Nippon Telegraph and Telephone Company collaborated to propose linear predictive coding (LPC), which is a method to convert speech into digital signals. This speech processing algorithm became the basis for VoIP and speech synthesizer chips, which was a major milestone for VoIP history.

The internet as we know it today began as a research project in 1969. ARPA, or the Advanced Research Project Agency, called DARPA today, was a U.S. Department of Defense agency focused on military technology. ARPA was working on remote computer access for improved communication between users. ARPANET was the first packet-switching network and early adopter of the IP network protocol communications suite.

Eight years later, in 1974, Culler-Harrison Incorporated’s office in Goleta, California, and MIT’s Lincoln Laboratory in Lexington, Massachusetts, made the first VoIP call over ARPANET (one of the earliest internet-capable phone networks).

The call went through, but the audio was clunky and full of static. At 2.4kbps, it wasn’t nearly as crystal-clear as the HD voice calls we have today. Still, this event marked a significant milestone in VoIP history as it established the first steps in the development of this kind of communication. However, it would still take more than a decade before commercial VoIP solutions evolved to become a viable communications option.

The early 1990s marked a period of rapid internet adoption for businesses. Various internet-based business phone systems emerged on the market to solve business needs. Speak Freely launched in 1991 as the first VoIP service and consumer-ready application. Soon after, VocalChat and VocalTec’s Internet Phone program entered the scene too.

Alon Cohen is the co-founder of VocalTec Inc. and the co-inventor of the Audio Transceiver that enabled the creation of Voice Over Network products. VocalTec was the first to release an internet phone in 1995, and it was during this time that Intel, Microsoft, and Radvision initiated the standardization of VoIP communication activities.

VoIP was developed around 1995 to originally serve as a way to save money on long-distance and international telephone charges. VocalTec is considered by many to be the first VoIP company with its creation of the first internet phone for the masses.

Jeff Pulver, an American internet entrepreneur, must be mentioned when talking about VoIP news and developments. He invested in various startups and co-founded Vonage and Vivox. His early work with his company Free World Dialup played a large role in the Federal Communication Commission’s decision to classify VoIP as an internet application and not a telephony service.

With the upgrades in communications, landline systems became increasingly popular. Stationed in offices, public spaces, and even homes, landlines connected businesses, customers, and families. While phones became the primary means of communication, calls outside of local areas incurred high per-minute costs. Some issues during this time include lagging connections, call drops, and party lines where two or more subscribers shared a telephone line or circuit.

Broadband internet started becoming readily available and affordable in most populated areas of the developed world by the early 2000s. This, combined with the invention of the modified discrete cosine transform (MDCT) codec (which made it easier for software to send audio as data over the web), set the stage for VoIP’s emergence.

VoIP providers charged a single flat monthly rate for their services, which was more enticing than paying for separate internet packages and landlines. Vonage launched in 2001 and became a huge success for consumers and businesses. Skype soon joined the scene in 2003 to demonstrate a new level of internet-based voice communications potential.

Marian Croak is the engineer known for pioneering the VoIP technology of converting data into digital signals for easy transmittal over the internet. She is credited for being one of the essential inventors of VoIP, establishing the fundamentals for the communication systems we know today.

Croak has received over 200 patents and several awards and was inducted into the Women in Technology International Hall of Fame in 2013. In addition to her accomplishments in VoIP technology, while working with AT&T, she patented the technology that allows people to donate money using text messaging.

Based on our latest critical VoIP statistics report for small businesses, 61% of companies are switching to VoIP setups. The reduction of telecommunication costs, specifically those around setup and long-distance calling prices, are key benefits enjoyed by small teams with limited budgets.

While VoIP has reached great heights, VoIP technology continues to improve. The next stage is enhanced functionality through disruptive integration with 5G and artificial intelligence. With 5G-enabled smartphones operating on 5G networks, VoIP services expect better packet prioritization, analytics, and automation, as well as improved reliability.

The flexibility of VoIP through omnichannel service delivery will allow organizations to break down the silos and deliver a more client-centric strategy for higher customer satisfaction. Next-generation VoIP intelligence turns data from different interaction points into seamless customer conversations.

It is estimated that the VoIP services market will reach $194.5 billion by 2024. VoIP’s growth is primarily driven by low installation and maintenance costs, minimal staff support, better reliability, and robust features.

Parallel to the development of VoIP, communications platform as a service (CPaaS) is gaining traction as developers are better able to integrate communication, automation, and customer service features into existing business applications and software. CPaaS helps deploy multiple channels for customer and internal outreach. To learn more about this, read our CPaaS market trends to understand the CPaaS market better.

The history of VoIP technology continues to evolve, making it more affordable and feature-rich than primitive landline services. Now, businesses have several options in terms of VoIP service providers, where entire offices will be able to use VoIP smartphone apps to conduct business communications on the go.

Here are three highly rated VoIP service providers, ideal for small businesses that scale with the size of your company:

RingCentral offers a business VoIP system that enables users to make calls from anywhere using laptops or mobile devices. These phone systems integrate traditional calling with modern features such as unlimited calling, video conferencing, and team messaging. It is suited for small businesses that want to improve business communications through reliable and unlimited telephony services. 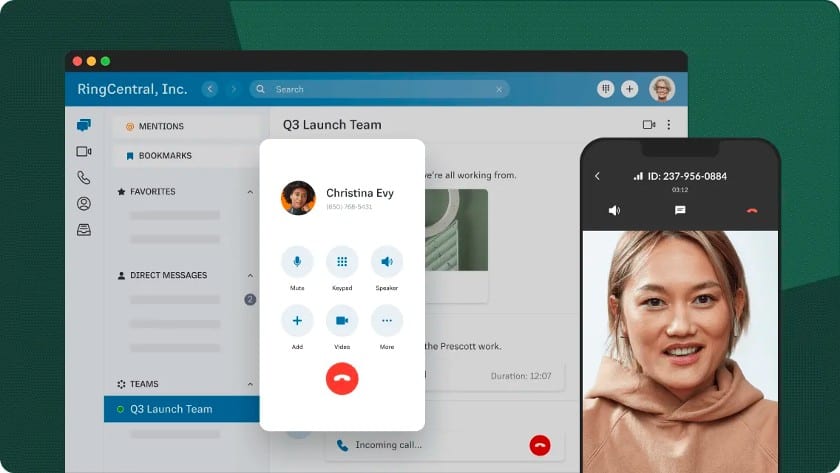 RingCentral offers four plans with its basic plan, Essentials, starting at $29.99 per user, monthly. It comes with business phone or toll-free numbers, a business short messaging system, team messaging, document sharing, and voicemail-to-text. With this, RingCentral offers a wide range of third-party app integrations, auto-attendants, and multiplatform support. Read our RingCentral review to learn more about how it can help you grow your businesses.

Nextiva is a business phone software that connects teams with their customers and colleagues. It offers comprehensive VoIP features that unify your teams and customers in one platform. Nextiva is a virtual phone system that works seamlessly with devices like VoIP hardware, mobile devices, and desktop computers. 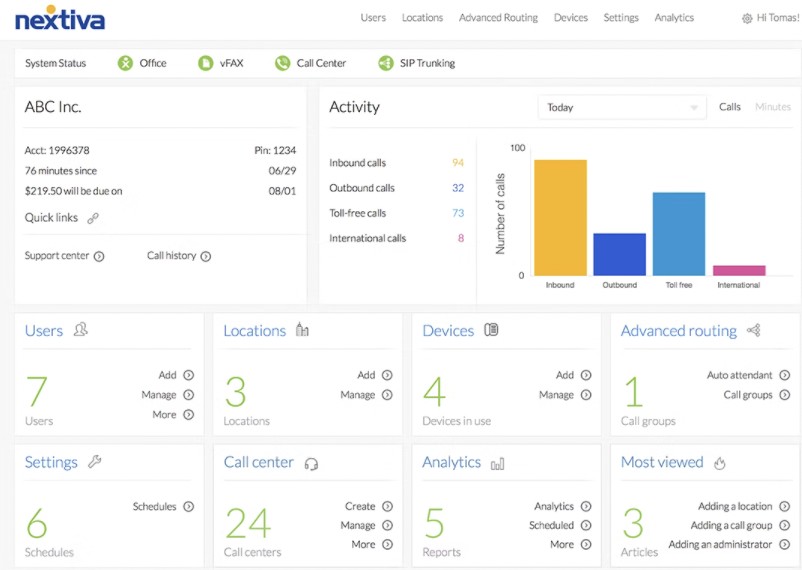 Some of the great features offered by Nextiva include call management services, voicemail recording, and auto-receptionists. Monthly fees start at $23.95 per user when billed annually. Nextiva is excellent for small businesses that are growing their business and looking for a VoIP solution that scales with you. 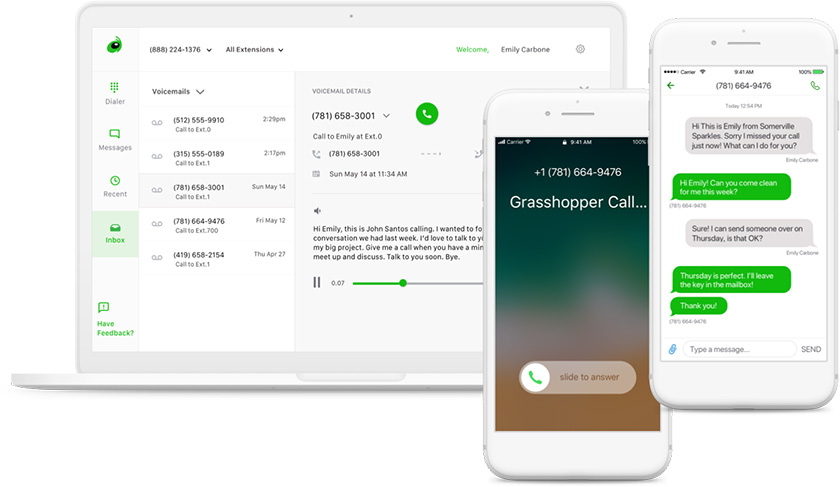 Use Grasshopper and get local business phone, toll-free, and vanity numbers, or port your existing number. (Source: Grasshopper)

Grasshopper offers three plans for solopreneurs and small businesses starting at $29 per month. Its basic plan comes with one phone number and three extensions. All Grasshopper plans come with several features that include VoIP and Wi-Fi calling, instant response, and virtual fax. Read our Grasshopper review for more information.


Not what you’re looking for? In addition to these options, if you’re a small business or solopreneur looking for cost-effective VoIP solutions, read this guide on our recommended top six cheap VoIP services. These low-cost options offer various services, such as texting, video conferencing, and team chat.

The short answer to this is yes. There are VoIP software and applications available that will enable you to make and receive calls for free. However, businesses typically need more advanced features, such as automated call distribution, chatbots, or live call answering services.

On average, VoIP phone systems cost about $20 to $200 per agent (paid monthly), depending on the features and service fees.

Are VoIP & Wi-Fi calling the same?

Both VoIP and Wi-Fi use the internet but are not the same. VoIP refers to the use of packet-switched internet telephony to make voice calls instead of a regular analog telephone line. On the other hand, Wi-Fi calling refers to the ability to make calls over a Wi-Fi connection built into your device.

VoIP is relatively new but anchored on the technological advancements of the internet and the telephone. For those wondering when VoIP was invented, it rose to fame in the mid-1990s as a cost-effective option for international and long-distance calling. To learn more about VoIP technology, read this article on what is VoIP to better understand how it can help your business.

This VoIP history highlights that this relatively new technology has been rapidly expanding over the past few years. It has a rich history with the telephone and the internet, serving as major founding blocks that led to VoIP as we know it today. As the internet advances and becomes more affordable, we will likely see VoIP technology solidifying itself at the forefront of business communications.

Silvana is a professional development worker and experienced writer. She’s worked with the Philippine government and non-government organizations for technical documents and reports. Silvana’s been engaged by various businesses to produce content ranging from current events, technology, lifestyle, business, social development, and wellness.