Private branch exchange (PBX) phone systems come in the form of hardware and software that handle incoming calls and automatically routes them through a voice menu of options for different departments and extensions. Costs range from free options to thousands of dollars depending on the service. Other features include call transfer, scheduling, and more.

PBX systems work in a very similar fashion to the human switchboard operators who used to facilitate call traffic over landline networks in the past. If the customer dials a company’s main number, they used to be put in touch with an operator who would physically wire a connection to the appropriate extension. This system used to be known as a private brand exchange, and was replaced with an automated version that we still have today. 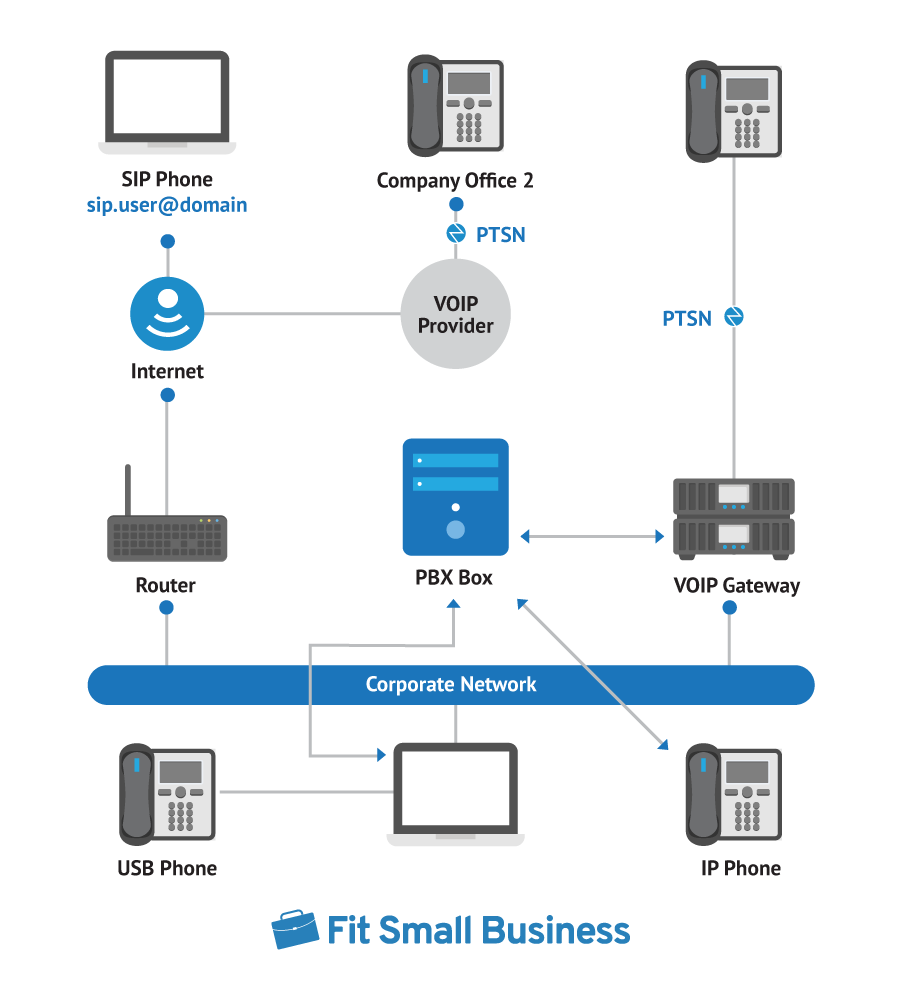 An illustrated view of how a PBX system works

These services receive incoming calls and route them based on rules that either you or someone configures in your phone system’s settings. This means that someone can call your company, be greeted with a range of options, and reach their extension without anyone on your team having to intervene. In some cases, PBX services allow the ability to schedule calls in advance.

Today’s modern PBX systems are hosted within the servers of leading voice-over-internet-protocol (VoIP) providers such as RingCentral and Nextiva. This means that you do not need to host any hardware or software at your office, which can save your team a lot of time, effort, and money. Hosted PBXes are often used in businesses that range in size from small offices to call centers.

In order to use most internet-based PBX services, you will need a fast, stable network connection. We recommend trying out our VoIP speed test before making a financial commitment to a VoIP or virtual phone service.

There are four distinct types of PBX systems available to today’s small businesses. Traditional landline systems use hardware-based landline PBX boxes. However, if you have an internet-based system, you will be using either an IP, hosted, or virtual PBX system.

Traditional PBX phone system technology is landline-based and comes in the form of a physical hardware box that you keep and maintain in your office. In basic terms, phone lines enter your office where they are connected to the box, and they allow calls to be distributed to each desk in your office via a voice menu. These setups can cost $1,000 and easily go up from there depending on which provider you go with.

Most small businesses will want to go with an internet-based phone service because they are more affordable and offer advanced features that are not possible over a landline. However, rural businesses that don’t have access to high-speed packages might still want to use landlines. The fact that they run independently of the power grid also makes them good for teams in areas with frequent outages.

An IP PBX is very similar to a traditional PBX phone system. The biggest difference is that it transmits and receives calls as data over the internet rather than as analog-based signals. IP PBXs are easier to set up because you can use Ethernet cables to connect phones instead of traditional phone lines. This saves your team from having to do the extensive rewiring.

IP PBXs still require a hardware box. These can cost $1,000 and up, just like landline PBX devices. With that in mind, they are still good for larger businesses looking to save on monthly hosting fees found in hosted and virtual PBX systems.

A hosted PBX is a newer kind of phone system technology. It uses data-based VoIP phone signals like an IP PBX, but you don’t have to purchase any dedicated hardware. Instead, the system is hosted in the cloud, which means you can manage features like call routing, auto-attendant, and voicemail from your desktop or mobile device. Hosted PBX solutions are more affordable and easier to set up than an IP or traditional PBX.

As a general rule, these systems are going to be the best fit for most small organizations because they are easy to set up and do not require a dedicated hardware box. The best hosted PBX systems, like RingCentral, also offer a complete range of communications features, but without added hardware costs. All you need is a fast, stable internet connection.

Virtual PBX systems can be thought of as a “light” version of a hosted PBX. They work in a similar fashion to hosted solutions, but offer fewer features. For example, they can only forward calls to an existing mobile, landline, or VoIP phone number. These systems can also receive incoming call traffic and route calls based on predefined rules, like forwarding calls to different departments or extensions.

Most virtual PBX systems are more affordable than their hosted PBX counterparts. However, the fact that they require an existing business phone system to work makes even the best systems unattractive to many established organizations or those large enough to benefit from a more complete phone system.

PBX prices vary widely by type and can be anywhere from free for a basic virtual system to as much as $1,000 for a traditional setup. Each type of phone system also carries a monthly service cost. One should also keep setup and handset fees in mind as well.

However, if you’re in the market for a new complete VoIP system with PBX, we recommend looking at RingCentral. The service comes standard with a PBX as well as call management, voicemail, and other functionality. Click the button below for more information.

What is the difference between a landline & a VoIP phone system?

Landlines transmit calls as analog audio signals over the same copper network that has been in place for over a century. On the other hand, a VoIP service transmits calls as data over the internet. For more details, check out our guide to landline vs VoIP systems.

Do I need an internet connection for a PBX?

You do not need an internet connection for a traditional PBX system. However, you will need a high-speed connection to use any type of internet-based PBX.

Can landline & VoIP phones call each other?

Yes, they can. VoIP and landline networks both have mechanisms that allow callers on either system to talk to each other.

PBX systems automate a lot of the processes that used to require human labor. These services are essential in handling your incoming call traffic. They also make sure your customers are connected to where they want to go quickly and painlessly.

A hosted PBX like RingCentral delivers a wealth of telephony features without the need to invest in a PBX set. It also offers advanced VoIP functionality like mobile apps and voicemail-to-email. Click the button below to get started with RingCentral.