Radio advertising costs range from $200 to $5,000 per week, on average, depending on location and the size of the listening audience. The cost of producing the commercial is $1,000 to $2,500 depending on what is included, like music, voice actors, and editing. However, some stations have their own advertising production teams to save costs.

So is radio advertising a worthwhile investment of ad spend for your particular business? To determine the answer, we examined the factors that can influence cost.

How Much Does a Radio Ad Cost per Location?

As a guidepost for radio advertising costs, we examined estimates from the experts at Gaebler, the Resources for Entrepreneurs. Not surprisingly, the cost of traditional radio advertising is higher in larger, more competitive markets. For example, in New York City, the cost of a 30-second radio ad is much as $1,405, while in Topeka, Kansas, that 30-second radio ad costs just $25. The cost for air time aside, advertisers also incur the cost of radio ad production.

Traditional radio advertising is also mainly local, which can limit your audience. Streaming radio advertising, on the other hand, offers a national audience that’s typically segmented based on listener interest and not location. This digital age “radio” advertising allows you to target a much larger audience that is more interested in your specific offerings, provided those offerings aren’t limited to your local area. However, streaming ads can be very costly in comparison.


It’s important to keep in mind that the figures above represent pricing for different time slots and that traditional and streaming radio stations charge different rates depending on the time of day. In other words, you can’t simply divide the total cost by the number of ad spots to determine how much you are paying for each spot. This will not be accurate because some times of the day are much more expensive than others.


How Do You Calculate Radio Ad Cost per Spot?

The general formula for determining the cost of a radio ad is simple—it comes down to the number of listeners times the cost to reach 1,000 listens (CPM). However, as you’ll have noticed from the tables above, radio advertising costs are not always so black and white. There are a number of factors involved in radio ad pricing, from the notoriety of radio stations and shows to time of day and time of year (think holidays or special events). 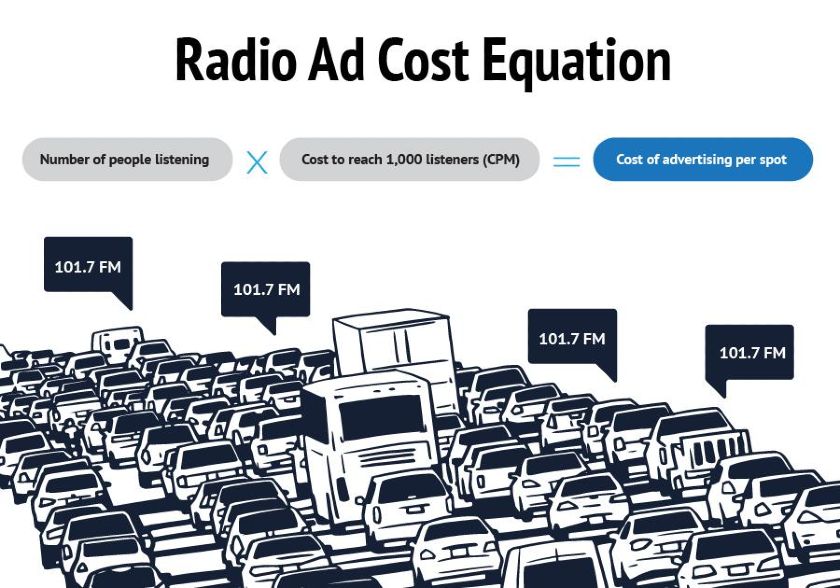 What Is ‘Pricing per Spot’ in Radio Advertising?

Some radio stations will offer pricing per spot, which involve purchasing specific spots (or times) at generally an attractive price point. Pricing per spot is generally used to secure ad placements during the times of the day when there are fewer listeners. This makes the ads seem cheap, but only because you are reaching a fraction of the listener base of a daytime audience. 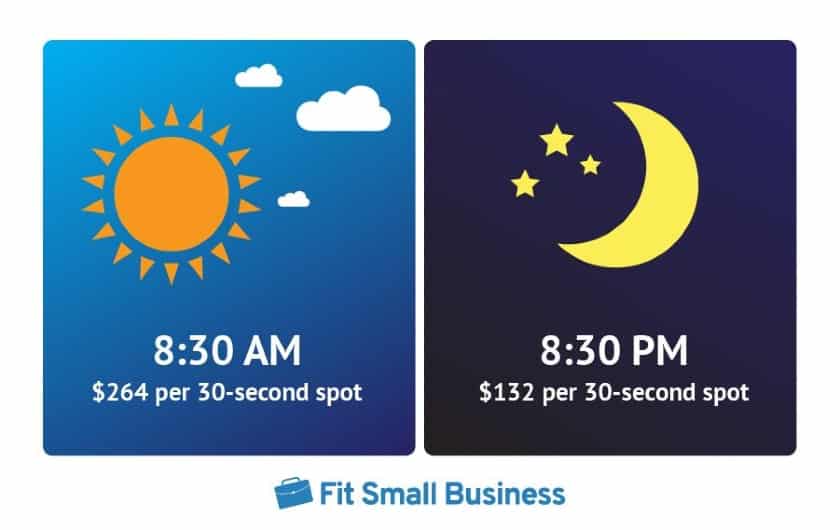 While many factors can affect radio ad costs, most are tied into listener demographics, competition, and how well an advertiser can work out a reasonable ad cost with a station. Below are the major factors, such as how many people are listening during your time slot, the demographics of the listeners, number of competitors in your market, and how well you can negotiate with the radio station.

Here are the significant factors that influence radio advertising costs:

Keep in mind that not all radio ads are priced the same way, and the final cost depends on the station’s policies, listeners, demand and competition in a specific market, and other variable factors. For example, if there’s a popular event happening in town, like a highly contested political election, the price for an ad spot will jump.

In addition to the cost of air time, you’ll also incur the cost of radio ad production. While this can be very minimal for businesses that are able to produce a high-quality radio ad in-house, it can also cost upward of thousands for those who want to leave their ad in the hands of advertising experts.

When producing a radio ad, you’ll have two main avenues to choose from:

If you’re not sure which to choose, it’s generally advisable to opt for professional ad production with a seasoned agency. Despite the higher upfront investment, it often yields a more effective ad that not only makes your radio ad spend worthwhile, but also lends to a higher return on ad spend.

When it comes time to purchase a radio ad spot, your local radio station will put together a cost proposal, which can also be called a media buying proposal. This proposal should include a rate chart of their specific costs, but will probably include many terms specific to radio advertising that can make the proposal difficult to understand. To help, we’ve offered a quick glossary guide below:

Because there are many words and terms that are unique to radio advertising, you want to understand them before agreeing to a price.

While a rate chart may look complicated, the effort to understand it is often worth it. This is because the radio advertising industry in the U.S. raked in nearly $19 billion in 2019 across about 15,500 radio stations and 272 million listeners. Though major national companies such as Home Depot and Disney are investing heavily in radio ads, it’s not just for household brands. In fact, nearly 70% of those advertising on the radio are local businesses.

You can learn more about why businesses large and small use this marketing strategy, and about how to measure your ad’s performance, by visiting our guide on radio advertising.

How do you get the lowest radio advertising cost?

It’s entirely possible to negotiate a lower radio advertising price and it’s always worth a try. Start with the advertising rate card provided by the station. With these prices as your baseline, ask for discounted rates, offer giveaways and contests, shop around, and consider non-peak times for advertising to save money. It’s also common to get discounts for buying ad time in advance, so it may be worthwhile buying your ads in bulk to get a bulk discount even if you are just starting your business.

What age group listens to the radio the most?

One of the more challenging aspects of radio advertising is its lack of audience targeting compared to digital advertising. However, there’s still a lot of data around radio audiences. For example, 92% of Americans over the age of 12 listen to the radio each week. The largest age group tuning into radio is over 50 years old, and this group accounts for about half of all radio listeners.

What are the most popular radio genres?

The three most popular radio genres (or radio formats) are country music, news/talk, and adult contemporary music, according to News Generation. Businesses looking to market their business on the radio should consider their target audience and which radio genre best fits their audience. This way, advertisers can be more strategic in their ad placements and more effectively reach their advertising goals.

Radio advertising costs are not only lower than direct alternatives such as television advertising, but radio ads also boast a higher average conversion rate than TV ads and online media alike. So radio ads are not only affordable, but effective. However, it’s important to keep in mind that if you want your radio commercials to be successful, you will probably need to invest a good part of your marketing budget in ad creation and multiple ad runs.

Before joining the team, Kelly Main worked as an analyst at firms like Lincoln Financial Group. She has also founded a number of successful startups, including OpenOnion under the Google Tech Entrepreneurs Program, which was later acquired under the name Whisper.