Sheena has over 20 years of combined experience in sales and marketing and earned her MBA in International Marketing. You can find her experience throughout Fit Small Business’s content about sales management, strategies, and tools.

This article is part of a larger series on Sales Lead Generation.

Some people question just how valuable networking is, if it’s worth the time and investment, or what’s the best way to do it: virtually or face-to-face. We’ve compiled some networking statistics like the importance of trade shows for getting new customers and why acquaintances are key to finding a job.

Here are 13 business networking statistics you should know when considering lead generation strategies:

An economics study conducted by Oxford revealed that trade shows are worth the time and expense. In the study, more than half of business travelers said that 5% to 20% of their company’s new customers were the result of trade show participation. Trade shows are great for acquiring new customers because you’re able to connect in the context of important topics in your industry.

Another statistic from the Oxford study was that in-person meetings are better for sales conversions. In the study, both executives and business travelers estimate that about 40% of their prospective customers are converted to new customers with an in-person meeting, compared to 16% without an in-person meeting. So if you have an opportunity to meet in person with a prospect, take it.

3. Every $1 invested in business travel yields $12.50 in incremental revenue

Some business owners question and validate if it’s worth it to travel for business meetings. According to the University of Oxford Economics study, for every $1 invested in business travel, companies realize $12.50 in incremental revenue. This is a significant return on investment and it shows that in-person meetings and events really do pay off.

Moo, an online print and design company, and one of the best business card providers conducted a survey of U.S. business owners where 44% said that if they were to hand out 100 business cards, it would generate $5,000 per year or more in revenue. Also, nearly 90% reported that using their business cards has led to them generating new business.

Networking is great for making new contacts, but don’t forget to network and nurture relationships with people you already know. The Freelancing in America 2018 Survey asked where freelancers typically find freelance work, and here are a few sources they mentioned:

6. LinkedIn Messages have led to new opportunities for 35% of networkers

In-person networking is important, but so is networking through social channels like Facebook and LinkedIn. According to a LinkedIn survey, over 35% of the respondents say that a casual conversation on LinkedIn Messaging has led to a new opportunity. LinkedIn is great for making new connections for growing your business or for getting a new job.

7. About 38% of entrepreneurs say bars & restaurants are great places to network

9. Over 43% of the attention we devote to someone goes to their eyes

When networking in-person or even virtually via video conference, we have to be mindful of eye contact. According to a study done by the University of Miami, over 43% of the attention we focus on another person is devoted to their eyes. It’s important to know this because eye contact plays a key role in developing emotional connections.

10. Many (40% of respondents) say they network more online than in person

In a Forbes networking survey, 40% of respondents said that they network more online than in person. Online networking is great, but connecting in person is more impactful. If you want to meet more people in person, here are some places to consider.

Shepa Learning came up with a list of 100 places, but we’re listing 11 here:

11. You are more likely (58%) to get a job through acquaintances than friends

Most of the time, we think of our closest personal or professional friends and colleagues as being the most likely source of job referrals, but a classic study shows that you’re 58% more likely to get a job through acquaintances. There’s a social network study done in 1973 at Stanford that revealed the importance of weak ties. Weak ties are those people in your network that you don’t know very well, but are acquaintances.

The study showed that within a social network of strong ties, people who also had weak ties outside of their main social networks could access other networks. These networks were great resources of information, like job opportunities. People with only strong ties didn’t have this same type of access. People with weak ties were able to find jobs with higher pay and that were more fulfilling.

(Sources: Tech Crunch: Weak Ties Matter and Quartz: Why Acquaintances Not Friends Will Help You Find A Job)

This statistic means many of those positions posted on job boards are spoken for and many open positions are probably not even posted. Networking is critical because you need to access and be made aware of these opportunities before they’re placed on job boards. The only way to know about them is by tapping into your network.

(Source: LinkedIn: 85% of All Jobs Are Filled Through Networking)

There are two statistics that support coworking being great opportunities for networking. The first one is the sheer number of coworking spaces available. There is one statistic that states that there are approximately 35,000 coworking spaces worldwide. There’s another one on remote work that reveals that 83% of employees work remotely.

If you’re a small business owner, freelancer, or solopreneur, consider what these networking statistics mean for how you approach your own networking strategy. If you’ve come across some enlightening statistics about or related to networking, leave us a comment below. Happy networking!

Another great option for growing your network or adding to your list of prospects is using a resource like Uplead, a database where you can build targeted business-to-business (B2B) lists. With Uplead, you get contact details, including email addresses for prospects. If you need B2B leads to grow your business, check out what they have to offer by signing up for a free trial.

Sheena Jones focuses on sales content and has over 20 years of combined experience in sales and marketing. Before joining the team, she was a Brand Manager at CDW and Manager at Discover. She received her MBA in International Marketing from Richmond International University in London. 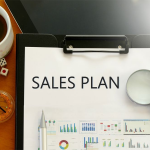 How to Develop Sales Compensation Plans in 7 Steps 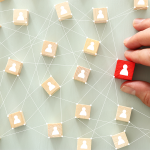 How to Organize & Track Your Sales Leads in 7 Steps