There are many different kinds of press releases—from a product launch or new hire announcement to recent awards, a merger or acquisition, or an upcoming event. We compiled the best press release examples across various press release types to illustrate how to showcase a newsworthy angle objectively, consider the target audience and what would be of interest to them, and offer journalists resources.

If you are struggling to write a great press release, did you know there are services that can help? Save yourself time and energy, and give your press release the best chance of landing press coverage by having your press release written expertly and distributed to thousands of media outlets by using a press release distribution service, such as eReleases.

If you’d rather write it yourself, here are 15 examples of press releases you can use for inspiration: 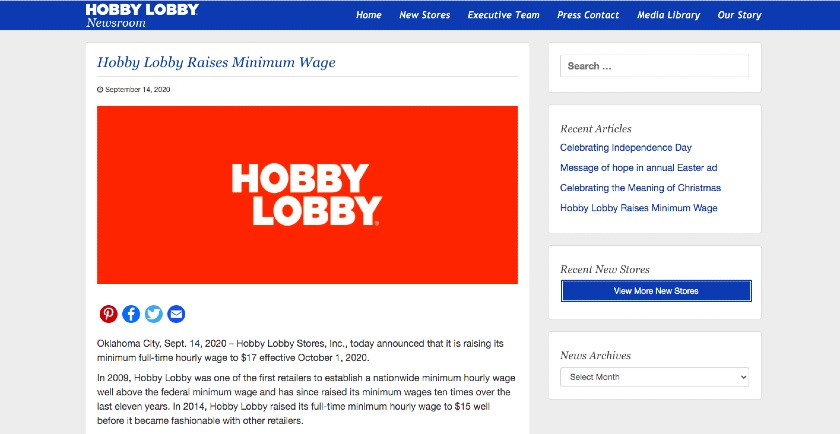 Hobby Lobby, a nationwide retail store, announced in a press release that it has raised the minimum wage for full-time employees across all of its locations to $17 per hour. With the ongoing minimum wage debates, it’s a newsworthy story for a corporation to instill its own minimum wage increase across its 900 stores. In addition to building a positive brand image, this news may also help attract and retain more staff. 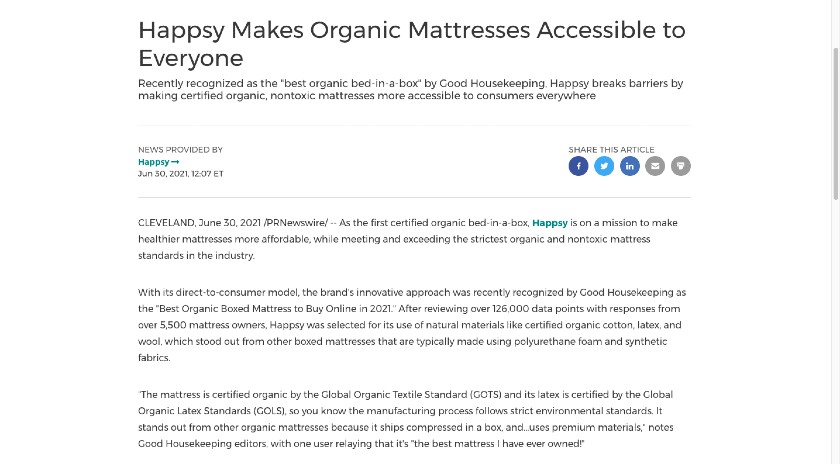 Happsy, an organic mattress manufacturer, utilized a press release to announce its launch. However, it didn’t simply use the press release to tell the world that it had arrived on the market. Instead, it found an angle that resonates with the vast majority. Through its use of inclusive language―such as “everyone”―the press release feels more relevant and relatable. In return, it’s more likely to connect with people—journalists and audiences included. 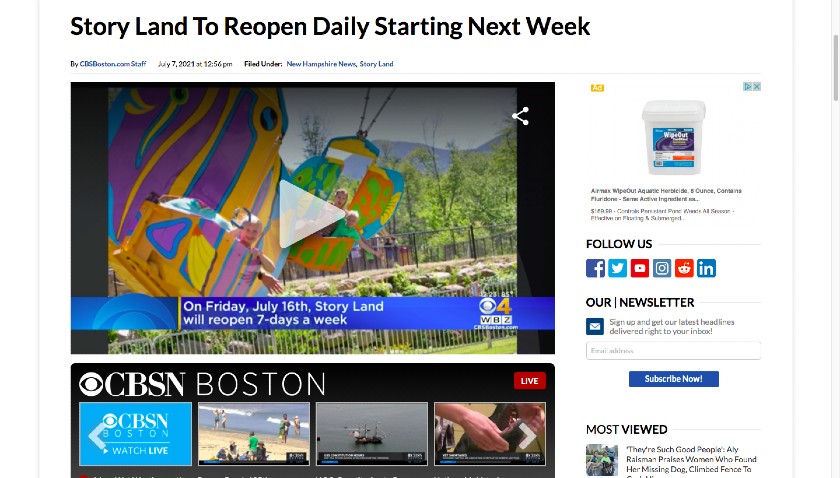 When Story Land, a children’s amusement park in New Hampshire, announced its reopening news via a press release, it caught the attention of journalists around New England. CBS Boston even covered the story in its local news segment, giving the small business a great deal of publicity to its target audience: families from within a driving distance looking for weekend trip ideas and things to do for the kids. 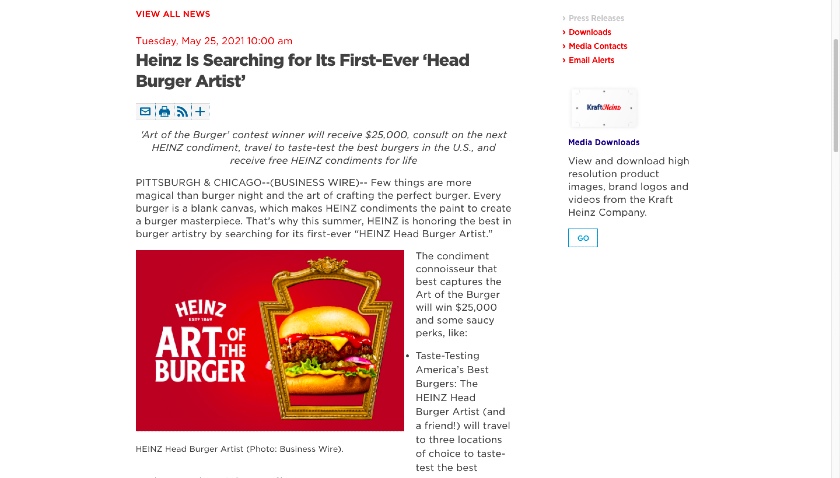 Heinz grabs the attention of the masses by getting the masses involved in its public hunt for a “Head Burger Artist.” While it sounds like one of those 21st-century inflated job titles, in reality, it’s a contest where anyone can win $25,000, free travel to taste test burgers, and free condiments for life. 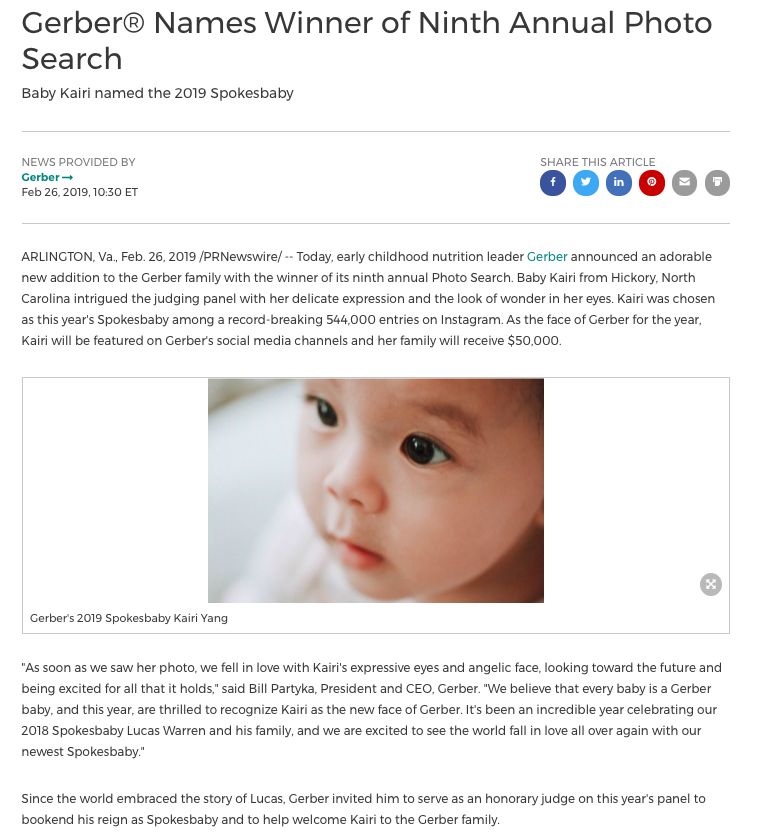 Gerber’s press release announcing their “Spokesbaby” does an impressive job of telling a well-rounded narrative that time-strapped, deadline-driven journalists can publish as-is. It includes a touching story, a compelling image, and feel-good quotes from key players.

The result is a newsworthy release, leaving readers satisfied but still looking forward to more. More than publishing a story, journalists earn the right to fill their publication space with follow-up news as the story continues to develop.

Zoom’s acquisition press release is part of an ongoing response plan to rising security concerns around the Zoom software. As such, the elements of the release were crafted strategically as part of an ongoing crisis communications plan. Zoom does a great job of bringing new stakeholders up to speed, showing its commitment to improving the security of its software, and providing ways readers can continue to receive updates. 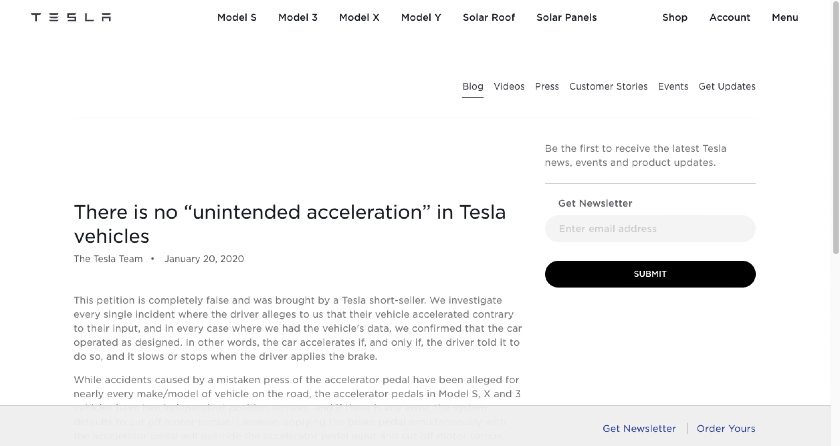 Tesla proactively releases crisis communication-style press releases to provide both sides of every story. While other businesses may seek to sweep any bad news under the rug, Tesla’s approach is to put it out there and start a dialog around it. By bringing any issues to the surface, it shows the public that the business is involved actively with its products and engages proactively with any claims, stories, or news that comes up. 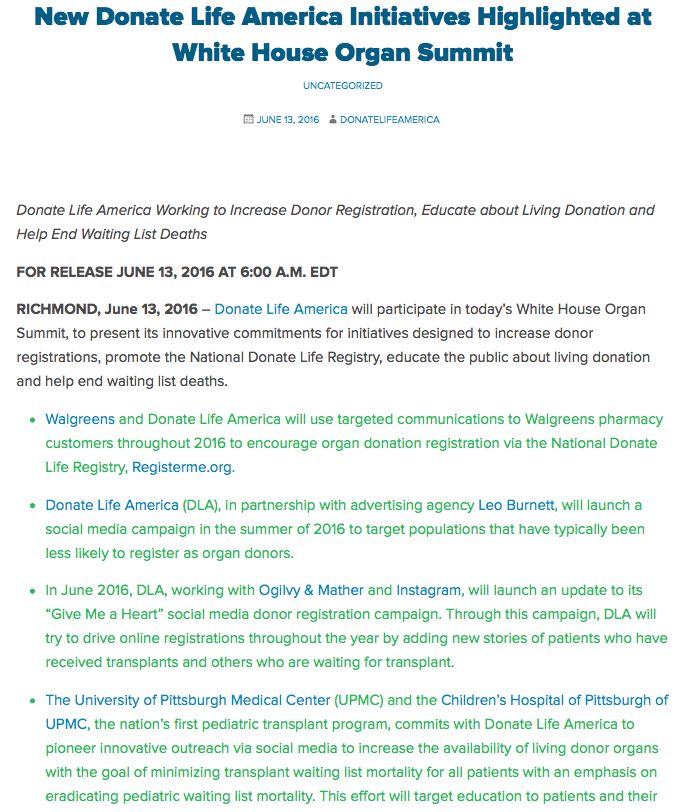 DonateLife America’s event and charity press release does an excellent job of using links to direct journalists to information around the angles they are most interested in covering. In accordance with best practices, the release does not offer a one-size-fits-all story but allows journalists to explore the angle their audiences would most value. Links direct journalists to the people, organizations, and campaigns involved, including social media campaigns, partner websites, and the digital presence of key influencers. 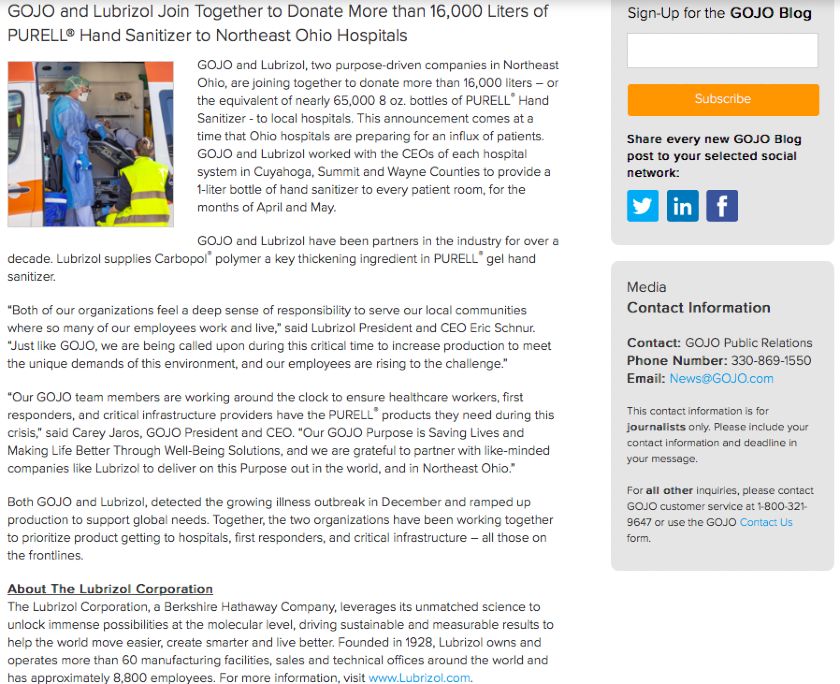 The Gojo press release immediately offers the who, what, when, why, and how of the news story. The company then does an excellent job of convincing readers they should care when it positions its news as a solution to a major community problem. To this effect, the press release clearly states that they are donating 65,000 bottles of hand sanitizer to local hospitals, readying for a large influx of patients during the months a global pandemic predicted to be the most devastating. 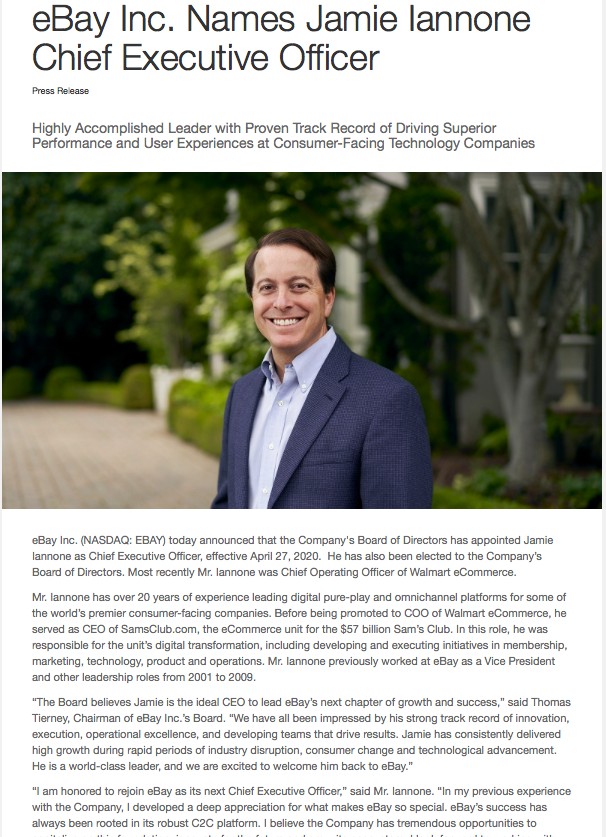 In the first paragraph, eBay’s press release does an excellent job of establishing why this new hire should pique journalists’ interest: Jamie Iannone was the chief operating officer of Walmart eCommerce. The new hire brings expertise that positions the company better in the ecommerce space. It then further develops the newsworthy angle by expanding on the expertise and impressive career behind Iannone while instilling trust and optimism in customers, investors, and employees who may be uneasy about change. 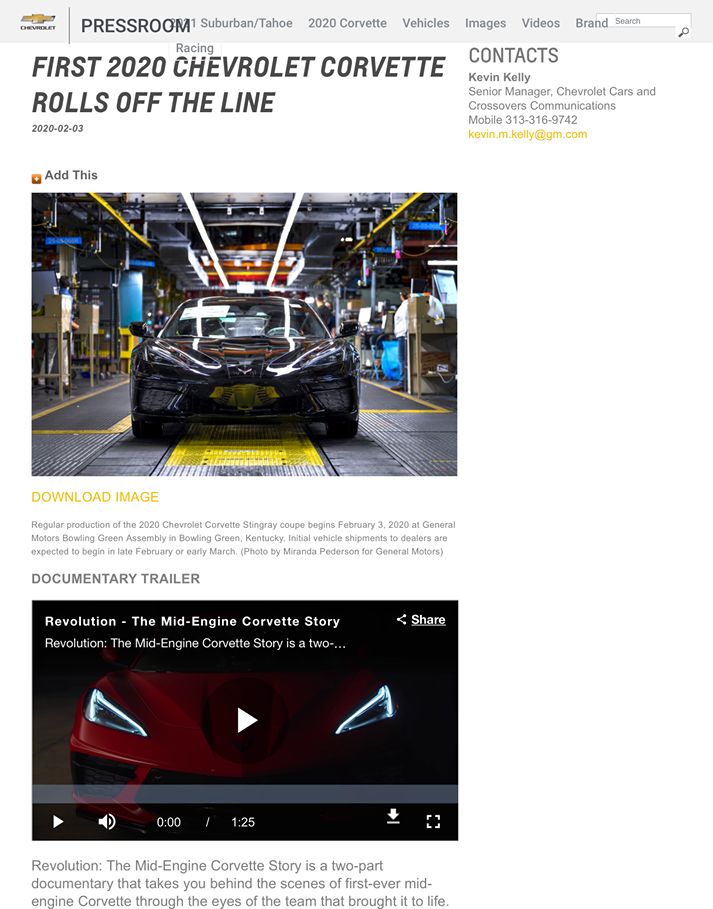 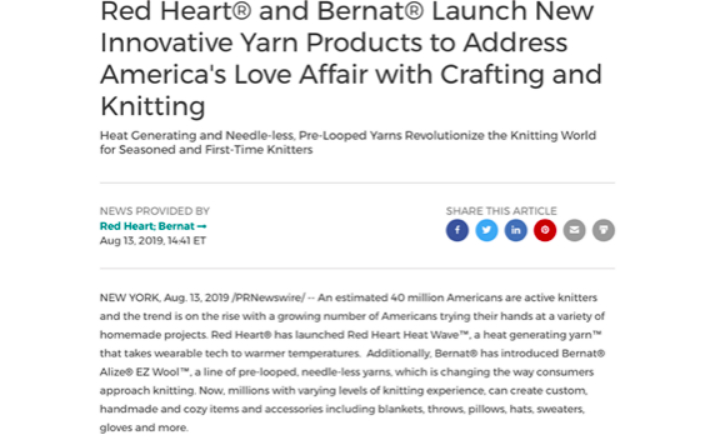 Yarnspirations’ product launch press release stands out by effectively positioning the announcements as an industry disrupter and, as a result, newsworthy. In the end, deadline-driven journalists—with little time to read an entire release—can make an immediate decision as to whether the news will be valuable to their audiences or not. Then, they can access information and experiences right away to explore their angles in more depth, without having to go on a time-consuming search for more information. 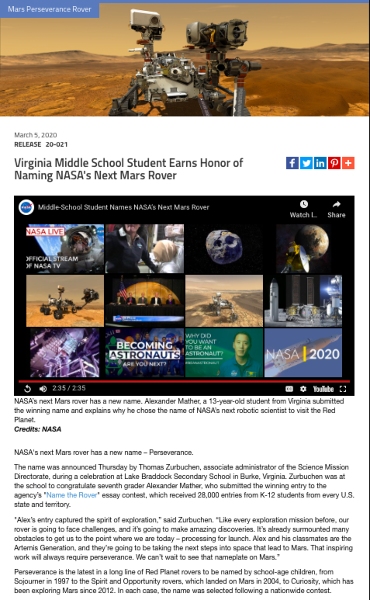 NASA’s press release impressively includes all the bells and whistles to make exploring the discussed news topic captivating. A high-resolution image lines the top of the release, pulling readers in before the title is even read. Next, the title highlights the feel-good newsworthy angle of the release: a school-aged child, Alexander Mather, was awarded the honor of naming NASA’s next Mars Rover. Finally, call-to-action (CTA) links provide ways journalists can follow the story, learn the history of the Mars Rover, and learn of future events around it. 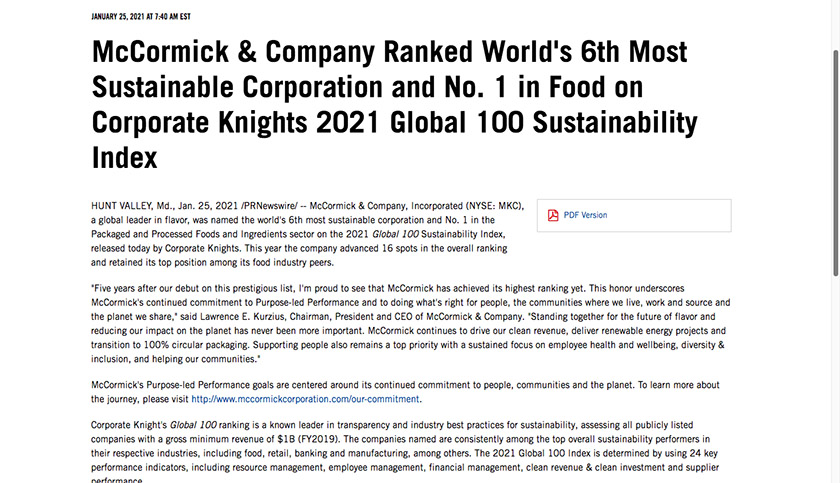 Press releases are a great way to share your business’ accomplishments and accolades with the world—especially when they’re ones that help the world. So, when McCormick & Company was ranked the world’s most sustainable company in the food industry, it shared the news via a press release. Not only does this help to build or solidify a positive brand image, but it also serves to keep the well-known brand top of mind. 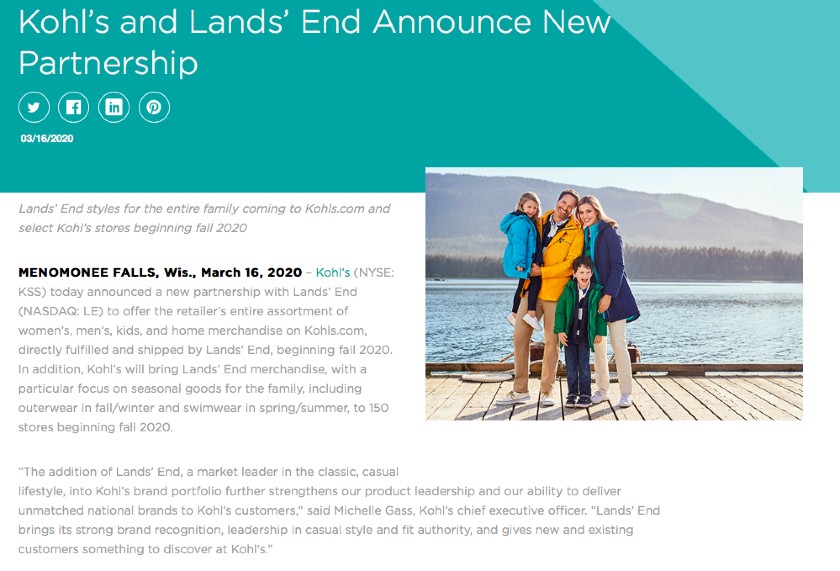 Kohl’s does an excellent job of creating a very short but informative press release. The first paragraph lists the who, what, when, why, and how of their new partnership announcement in two sentences. This brevity here offers an objective, fact-only release without a self-promotional tone.

Journalists are often working on tight deadlines. Hence, they need stories they can immediately recognize as newsworthy. Stories that can be researched and covered in a timely manner easily and quickly. This means that, while the press release should be short and objective, you need to provide plenty of resources and info to captivate journalists.

If you have a newsworthy story or announcement but lack contacts, use a press release distribution service, such as eReleases, which will get your press release in front of thousands of journalists.