Jess served on the founding team of a successful B2B startup and has used a wide range of sales and marketing tools over the course of her 15-year career. She uses her industry knowledge to deliver the best answers to your questions about sales tools and sales management.

This article is part of a larger series on CRM.

The term customer relationship management (CRM) came about in the 1980s, but the process of managing customer data started long before. The early days of CRM simply involved filing customer profiles on paper. However, with tremendous business and technological advances, CRMs have become powerhouse business software, making it a crucial tool for teams of all sizes.

In this article, we’ll go on a time travel to learn about the history of CRM platforms. You’ll discover how it evolved from a mere pile of cards with basic customer information into a crucial aspect of modern-day sales operations.

1950s: The Invention of the Rolodex

This history of CRM began with one of the earliest forms of filing customers’ contact information—the Rolodex. A rotating filing desk tool invented by Danish engineer Hildaur Neilsen in 1956, it houses a collection of index and business cards people can spin and flip through. In the 1950s, many businesses used the Rolodex to add, update, and store their customers’ information.

Mainframe systems are robust computer systems used to store and process data. While the first mainframe system was invented between the 1930s and 1940s by Harvard researcher Howard Eiken, it only became available for businesses around the 1960s. Forward-looking companies moved on from the manual Rolodex to using mainframe computers to digitize customer information, such as names, addresses, and contact details.

At the start of the 1980s, businesses found a way to make use of the customer information they collected through database marketing. Database marketing is the process of reaching out to customers in their database and offering them products or services. This was usually done through direct mail, where brochures and product catalogs were couriered to customers with the goal of convincing them to make a purchase.

Toward the latter part of the decade, businesses started practicing a more proactive approach to selling by conducting outbound sales calls. During this time, computers also became more widely available to businesses, which made filing and managing customer information in a digital format possible.

Compile & organize the information you discover in your outbound sales calls with a robust CRM like Salesforce Essentials.

Salesforce Essentials is an affordable CRM for small businesses that allows you to capture lead information in one place, fostering robust collaboration and organizing prospect information.

Did you know? In 1987, the first contact management platform was created by a software company called Conductor Software. Dubbed ACT! (Activity Control Technology), then changed to “Automated Contact Tracking,” the software was initially made for the manufacturing industry to track customer and prospect details in a single database.

Did you know? In 1995, CRM history was made and the term CRM was officially coined. However, there are debates on who exactly coined it. Suggestions on who gave CRM its official name include Siebel Systems founder Tom Siebel, educator and renowned marketing expert Jagdish N. Seth, and the Gartner Group.

1999 saw the advent of a handheld CRM when Siebel Systems launched the first-ever mobile CRM called Siebel Sales Handheld. The device, running on the Windows CE OS, allowed users to exchange and sync customer information through the Siebel Sales Enterprise data. This made it possible for sales team members to remain up to date with all customer interactions. Oracle, SAP, and PeopleSoft followed suit and also released their own mobile versions.

Salesforce, a popular CRM solution, also launched in 1999. It was designed to deliver software through a new model called Software-as-a-Service (SaaS) during the time when the internet was becoming widely used. The goal of the company was to eliminate expensive upfront and maintenance costs, as well as lengthy system implementations. Salesforce would eventually own this space to become the world’s largest CRM vendor.

Salesforce’s introduction of internet-based software was widely successful and dominated the 2000s. It was considered a breakthrough because it made it possible for users to access sales and customer data through any connected device.

2004 saw the creation of a free, open-source CRM program when technologists Clint Oram, John Roberts, and Jacob Taylor worked on a project called Sugar Open Source. Leveraging their past experience working for IBM and Hewlett-Packard, they created and hosted the software on SourceForge, a repository for free and open-source software. This eventually led them to found SugarCRM, making the Sugar Open Source version 1.0 publicly available.

In 2009, Salesforce reached another milestone in the history of customer service when it introduced the Service Cloud. Using the SaaS model, the Service Cloud offered customer service and support automation features. In the same year, the first application built on Force.com for Apple’s iPhone was launched and became the first enterprise partner on Apple’s App Store. 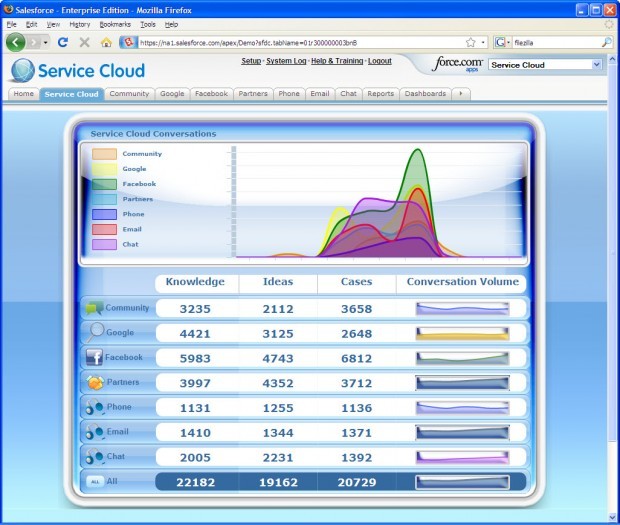 The early version of the Service Cloud enabled users to see various communication touchpoints in one place, including social media, phone, email, and chat. (Source: TechCrunch)

The late 2000s was also referred to as the “Hashtag Age.” Businesses started using social media channels, such as Facebook and Twitter, as a way to manage relationships with customers. Companies started using social media in their CRM strategy, shifting from transactional to interactive client relationship management. Toward the end of the decade, some of the CRM providers we know today were founded, such as Insightly (2009), Pipedrive (2010), and Freshsales (2010).

Fast forward to the present age: social media has become an important channel in communicating with customers, and many providers have included this feature in their systems. Check out our article on the best social CRM platforms and see how top providers can help you track engagements, listen to your audience, and communicate interactively with customers.

2010s: The Explosion of Technology & Rise of CRM Providers

The last decade saw a dramatic advancement in technology and how businesses rely on it. During the 2010s, CRM systems—and technology in general—truly became mobile due to the increase of smartphones, tablets, and other smart devices. The industry shifted from simply using traditional desktops or laptops when accessing the internet to having on-the-go, multichannel connectivity.

With these developments came an influx of new types of CRM software with their own unique selling propositions. Apart from simply offering universal CRM options, these providers specialize in addressing certain business needs or servicing specific industries, such as:

Social CRMs work with various social media platforms that allow users to track engagements as well as listen to and communicate with their audience. It also enables businesses to streamline customer interactions through all lifecycle stages and provides richer contact data. 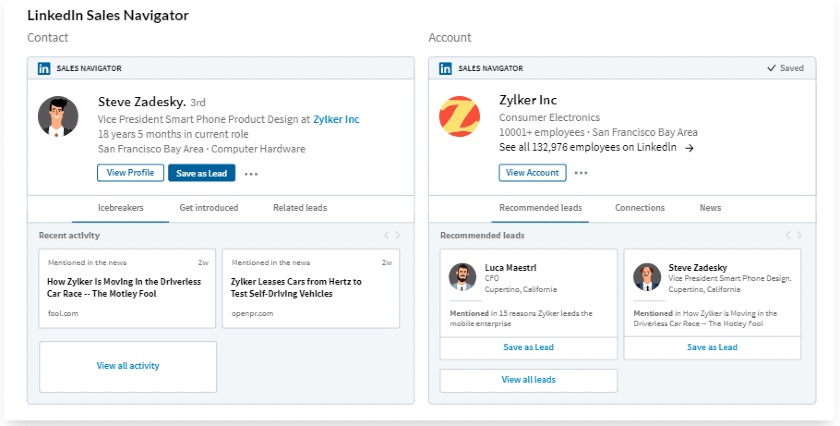 CRMs for accounting professionals are designed to help accountants, bookkeepers, and finance staff manage invoicing and billing in a centralized platform. It offers finance-related features, such as payment processing and tax computations. 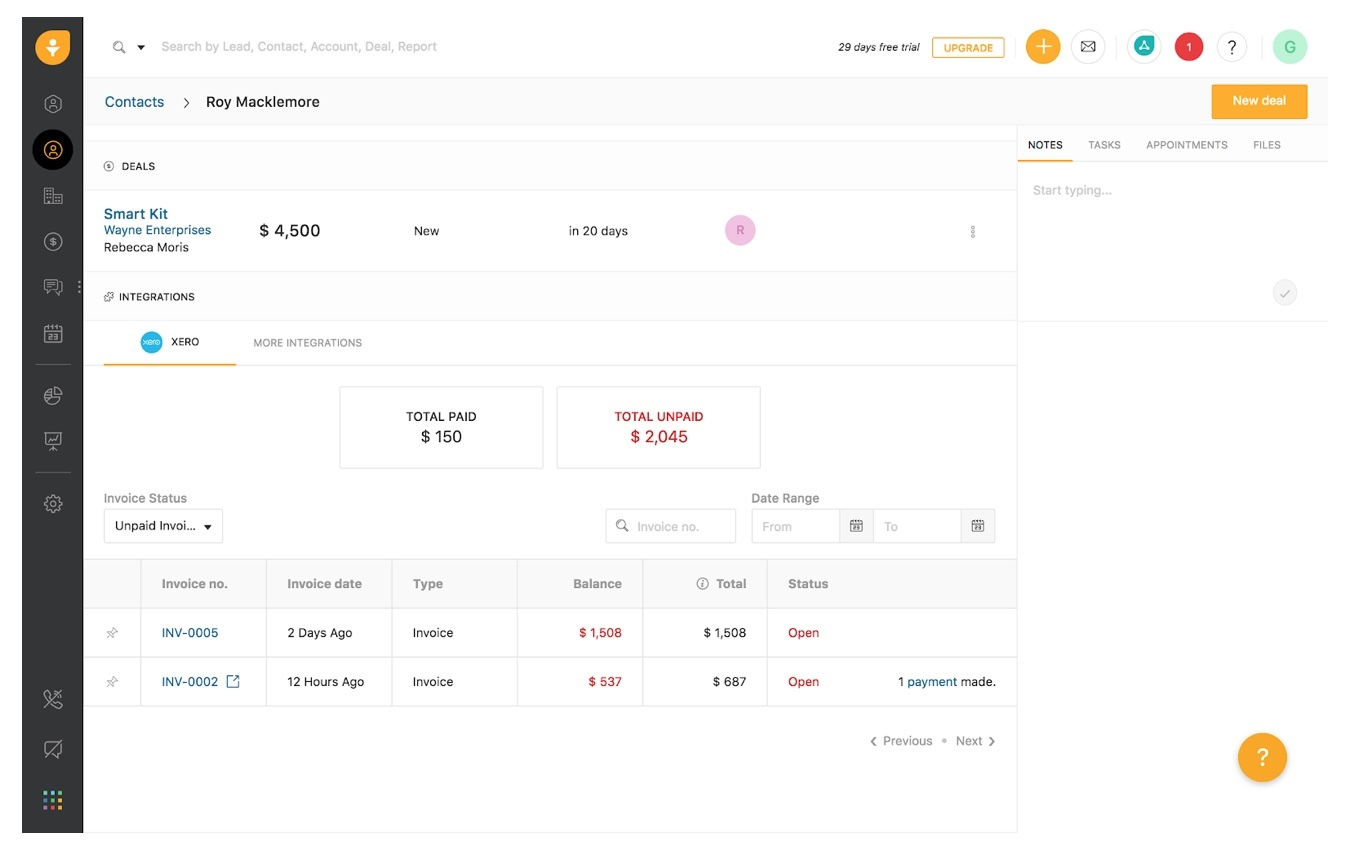 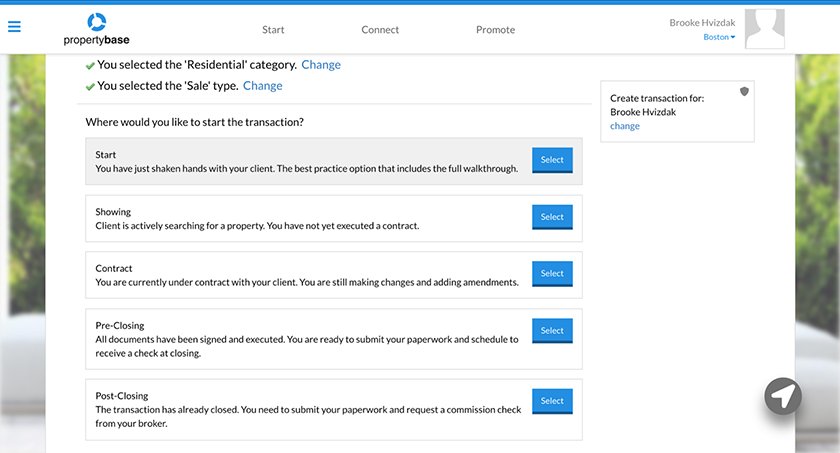 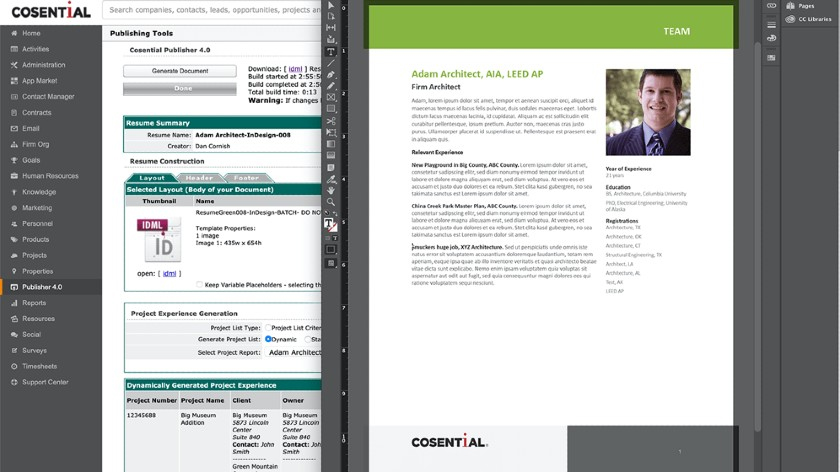 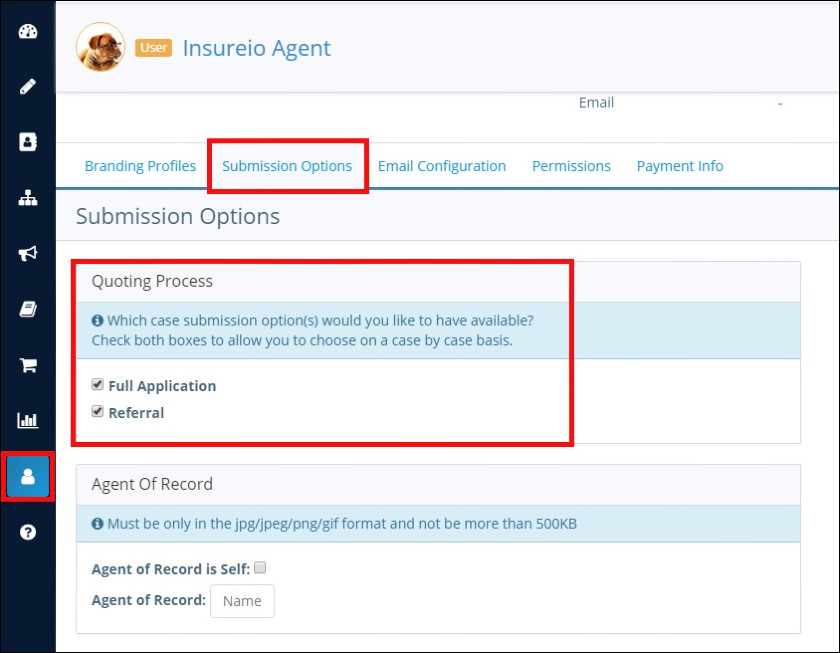 Insureio lets users create quotes for their various insurance offerings, which can be sent directly from the app. (Source: Insureio)

Some of the most advanced and forward-thinking CRM providers have started integrating artificial intelligence (AI) into their software. Machine learning processes massive amounts of data for qualifying leads, automating tedious processes, and giving users the most comprehensive picture of each of their prospects.

Are you looking to implement a new CRM platform for your small business? Be sure to check out our comprehensive guide to choosing a CRM to pick the one that best suits your needs.

Because of various advancements in CRM, it’s only natural that it is being integrated into businesses’ overall customer experience (CX) strategy. Moreover, it can accurately predict how customers will interact with their brand based on their past experiences. Businesses can see how customers behave, from awareness to evaluation and purchase phases. This ultimately enables them to personalize and customize their offerings on a granular level.

Are you in the market for a CRM system? Check out our guide on the best small business CRMs to explore which one suits your business needs most.

While the use of CRM platforms has expanded over the years, so has their impact on small businesses. Here are four interesting statistics about teams adopting CRM systems:

CRM evolution has come a long way from its early beginnings as a humble desk tool called the Rolodex. One thing remains the same, however: knowing who your customers are is paramount. While the broad range of information businesses can manage in a CRM has evolved, advancements in technology will continue helping businesses offer the best service and support to customers.

Jess Pingrey is a a seasoned subject matter expert passionate about providing the best answers about sales and customer service. She has 13+ years experience in sales, customer relationship management platforms, marketing, and content creation. Her background includes launching the sales department of a successful B2B startup, training teams on using software effectively, and serving as a customer experience champion.